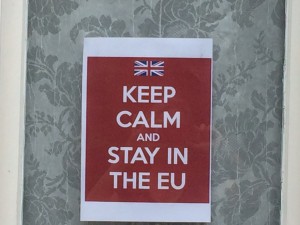 Debating the EU by Meike Ziervogel

‘So, let’s look at the facts,’ the Nymph says matter-of-factly. ‘We’ve tried to get media attention for our EU Remain Open letter and have failed. And that’s despite the fact that we have collected more than 220 signatures, including writers Sara
Maitland, Marina Warner, Sarah Waters and publishers Adam Freudenheim at Pushkin, Max Porter at Granta and Will Atkinson from Atlantic. The Guardian said: “I’m afraid we decided that our EU writers piece was the Review contribution – and I suspect the letters page will feel they’ve carried a cultural open letter already. Sorry!” – The Economist said: “However, our policy is not to publish open letters, or any letter that has run whole or in part elsewhere.” – ‘No one has run our letter,’ Peirene adds, then continues her list: ‘The Sunday Times stated: “Unfortunately the mailbag on the subject gets bigger and as a Sunday paper we have a limited time frame to the countdown so it is unlikely to be included.” And the TLS in the last minutes before going to print even cut our statement out of their EU edition.’

‘The publisher of the TLS apologized in a personal email to me,’ I throw in. ‘And subsequently they added our piece online.’

Peirene shrugs her shoulders, unimpressed. ‘Seen in isolation, each individual reaction appears excusable. But taken together this points to a shockingly weak stand of the creative and media industries on the EU referendum. The bookies are showing that the Brexit camp is catching up by the hour and Remain is no longer a certain outcome.’ Peirene lends forward, hugging her tummy with both arms. ‘This whole thing gives me a stomach cramp.’ She distorts her face in pain. ‘Any responsible newspaper should shout from the rooftops that writers, publishers, academics – leaders in thought and imagination – are for staying in. They should print letters like ours that go beyond the argument of money and migration and show the danger of an isolationism.’

‘We are not famous enough,’ I explain. ‘That’s why they have no interest in publishing our letter.’

‘Not famous enough!’ The Nymph is now hyperventilating. ‘We are one of the leading publishers of foreign fiction in this county. Our books are on major prize lists every single year. And we do more than anyone else to spread the word of foreign lit with our pop-up stalls outside supermarkets and distributing newspapers at tube stations.

‘And you, Meike. You always pretend to be so cool in this blog. But you are not! Weren’t you wondering the other day if this is what it might have felt like in Germany in the 1930s when everyone knew that something bad was about to happen but too many people looked the other way until it was too late?’

Peirene raises an eyebrow. ‘You have become more British than the Brits.’ She sighs. ‘Luckily you have me as your saving grace.’

I see her heading out of the office with a poster in her hand. She hangs it into the window of our front room for everyone to see. Keep Calm and Stay In the EU, it says.

This blog was originally published as part of Peirene Press‘s series Things Syntactical. The Pain and Passion of a Small Publisher on 13 June 2016.