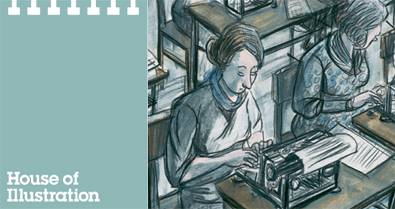 Saturday, 5th March, House of Illustration in King’s Cross, an event featuring three creators whose work is on display in the gallery’s brilliant exhibition Comix Creatrix: 100 Women Making Comics. The event starts at 3pm and is completely free (just rsvp to rsvp@houseofillustration.org.uk). Catherine Anyango is an artist and graphic novelist. Her acclaimed graphic adaptation of Heart of Darkness was published by SelfMadeHero in 2010. Anyango’s artwork has been exhibited at Art Basel Miami Beach, the National Film Theatre, The British Library and the V&A. She is currently a Tutor in Visual Research at the Royal College of Art. Barbara Yelin is a Munich-based comics artist. She received the Bavarian Art Award for Literature for her graphic novel Irmina, which also won the Best German Graphic Novel prize at the PENG Awards. Irmina is published in English by SelfMadeHero in March 2016. Yelin is also the author of Gift (with Peter Meter) and Riekes Notizen. Hannah Berry is a graphic novelist, writer and illustrator. She is the author of two graphic novels, Britten and Brülightly and Adamtine, both published by Jonathan Cape. She is currently working on a third, Livestock, which will be published in 2017. Her artwork has been exhibited in solo and collective exhibitions in the UK and around the world.

Paul Gravett is a London-based journalist, curator, writer and broadcaster who has worked in comics publishing and promotion for over 20 years. He is the author of Comics Art, Graphic Novels: Everything You Need To Know and Manga: 60 Years Of Japanese Comics, and co-curator of Comix Creatrix: 100 Women Making Comics with Olivia Ahmad.