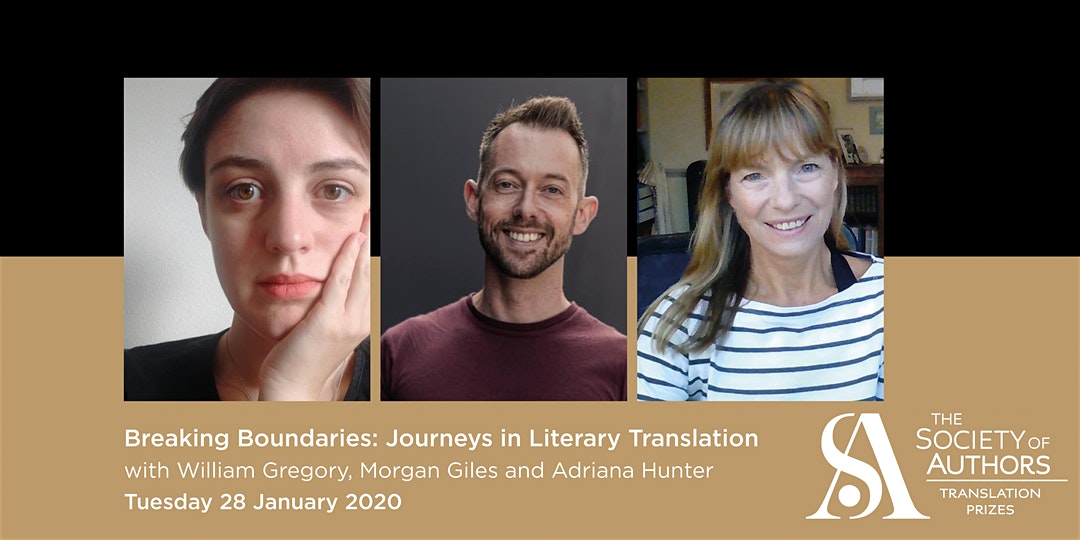 Literary translation has always been about breaking boundaries – especially when it comes to introducing new writers, new translators and new stories into the world. Exactly what the SoA’s Translation Prizes aims to do, and what these three shortlisted translators will discuss on 28 January 2020 focusing on their journey into literary translation, the pleasure of the craft, and a celebration of voices from across the world.

Shortlisted for the 2019 Translation Prizes, Morgan Giles will be discussing her debut full-length translation alongside Adriana Hunter, who has translated over seventy books into English, and William Gregory who has been translating plays from the Spanish since 2003. Covering different genres, languages, and styles, our three translators will discuss how the work of translation has developed for them over their careers, as well as the joys and difficulties of translating (and publishing) their latest books.

This event will be chaired by Antonia Lloyd-Jones.

William Gregory trained originally as an actor and began translating plays in 2003, producing and directing his first translation, Julio Escalada’s Springtime, at the Finborough Theatre in the same year. Since then, he has translated over 100 plays, many of them for international playwriting projects run by the Royal Court Theater with writers from throughout Spain and Latin America. His translations have also be produced by BBC Radio Drama (The Concert and Cuba by Ulises Rodríguez Febles) and his forthcoming work includes A Fight Against… by Pablo Manzi, premiering at the Royal Court in 2020. He is translation editor for the online journal Theatre Times, a visiting research associate at King’s College London, and in 2018 was the inaugural Translator in Residence at the Arniches Theatre, Alicante. He is shortlisted for the Premio Valle Inclán Prize for translation of  The Oberon Anthology of Contemporary Spanish Plays by Borja Ortiz de  Gondra, Blanca Doménech, Víctor Sánchez Rodríguez, Vanessa Montfort, and Julio Escalada (Oberon Books).

Morgan Giles is a literary translator based in London. Her translation of the Naocola Yamazaki short story ‘Dad I Love You’ appeared in The Book of Tokyo (Comma Press). She is shortlisted for the TA First Translation Prize for a translation of Tokyo Ueno Station by Yu Miri (Tilted Axis Press).

Adriana Hunter spent four years at a French school as a child, and took a 1st in French & Drama at the University of London, Goldsmith’s College. She worked as a film publicist and freelance writer before ‘discovering’ the first book she was to translate. She has now translated over 80 books, mostly works of literary fiction. She won the 2011 Scott-Moncrieff Prize for her translation of Véronique Olmi’s Bord de Mer (Beside the Sea) and the 2013 French-American Foundation and Florence Gould Foundation Translation Prize for her translation of Hervé Le Tellier’s Electrico W, and was shortlisted twice for the Independent Foreign Fiction Prize (now the Man Booker International Prize).

Antonia Lloyd-Jones has translated works by several of Poland’s leading contemporary novelists including Olga Tokarczuk, winner of the 2018 Nobel Prize in Literature) and reportage authors, as well as crime fiction, poetry and children’s books. She is a mentor for the Emerging Translators’ Mentorship Programme, and former co-chair of the UK Translators Association.