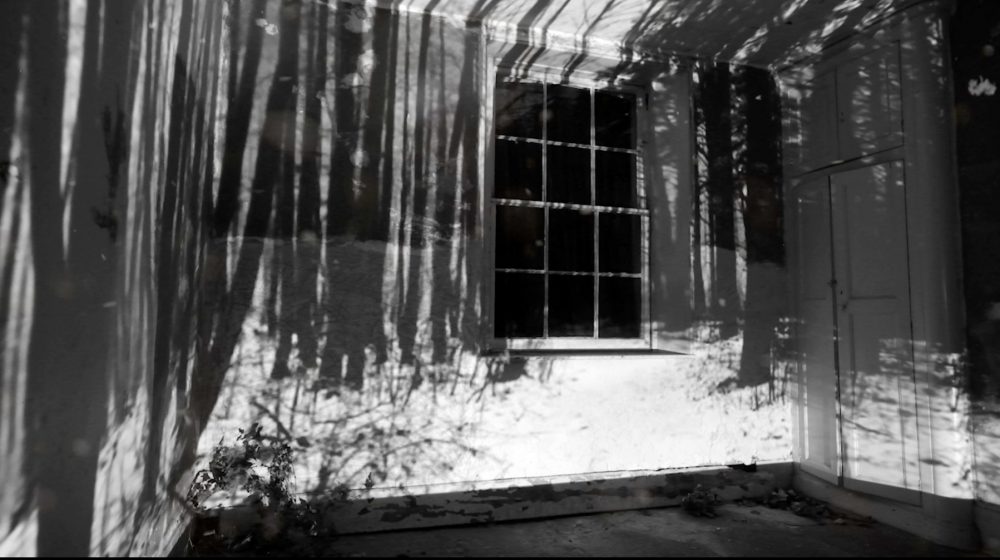 We’re thrilled at Snow Q – our collaborative project re-imagining Hans Christian Andersen’s Snow Queen story – to be working with filmmaker Wendy Pye again. For this next version of Snow Q as a live literature production,  we needed to make our collaborative work as portable as possible –  what better way to do this than through the medium of film!  Wendy is working on three short filmpoems which combine Maria Jastrzębska’s poetry, Peter Copley’s music, fine artist Dagmara Rudkin’s work and Wendy’s own ideas and imagery. The three films will run alongside the live literature performances’ February tour. (See also: Snow Q Live Lit Event 2020 TICKETS)

Here is Wendy’s post about her thoughts and concepts about the creation of the Snow Q  filmpoems. Photos of Wendy setting up projections in the servants hall at The Regency Town House before darkness set in by Dagmara Rudkin.

The combination of poetry and film I have found out has many different names and appears under different guises. Filmpoems, moving poems, film poetry, videopoetry, multimedia poetry and any other terms of this vein is a “genre” or “art form” that I haven’t paid much attention to until recently, when poet Maria Jastrzębska, invited me to make three film/videos in response to her poems inspired by Hans Christian Andersen’s Snow Queen story.  In this digital age, I can also struggle with how to identify myself: photographer, filmmaker, video artist or visual artist (or all)?  Perhaps in reality, my main mode of identification just varies depending on the particular context.

So for clarification purposes, Maria and I seem to have settled on naming the pieces ‘filmpoems’, and that is the term we shall embrace to proceed. The interesting aspect of creating film poems is the collaborative process and Maria insisted that I was not making an ‘illustration’ of her poem, she was more interested in my response to the melding of word and image which then creates a separate experience.

I’m just finishing the first film poem of the trio titled Lullaby. Lullaby traditionally a soothing song or piece of music that is usually sung to (or played for) children to sooth them to sleep. However it’s interesting that the lyrics of lullabies are more than often not sweet and soothing; they are dark and creepy and sometimes macabre.

In our original R&D installation performance of Snow Q on the Winter Solstice in 2018, within the former servants’ basement of The Regency Town House in Brighton, it was fitting to set the Lullaby installation piece in the disused and creepy Meat Safe room. In our interpretation, visual artist and fellow collaborator Dagmara Rudkin created strange and wonderful, textile bird like sculptural puppets that she originated as a symbol of Gerda and The Robber Girl and their tempestuous relationship. Both are trapped by their circumstances. Gerda has to travel through unwelcoming, foreign lands and Dagmara’s representation of Gerda and her journey are bird creations, with laced and embroidered surfaces. The Little Robber Girl knows only a world governed by violence and is represented by birds with scavenged, torn materials, leather gloves and wire. The audience peeped through the meat safe grills to see the suspended bird-like creatures dangling from hooks, layered with video projections of the wings flapping, sometimes frantically and sometimes gently, recalling acts of romantic courtships and acts of violence; moments of fear and anxiety followed by temporary moments of calmness. Raising the question does this ‘Lullaby’ attempt to sooth what is untamed?

As we were approaching the first anniversary of our Snow Q installation performance, It was an obvious opportunity to revisit the eerie basement at The Regency Town House and use the stark space to film my response to Maria’s Lullaby poem.

This time, I decided to film the entire video in the empty, former old Servant’s Hall.  The room became the contained space for Gerda’s Lullaby and her imagined restless night’s sleep. With the help of friend and photographer James Pike on camera and Dagmara’s creative support, we filmed video projections that I preprepared in response to Maria’s Lullaby poem. The projections included the presence of Dagmara’s flapping birds on the walls and in cupboards, transforming the room into a fairytale landscape – also filled with wolves and scorpions, wintery woods and stormy oceans.

Even though I was working very simply, I had a clear vision that I wanted the filmpoems to bear a visual, humble resemblance to the haunting black-and-white quality of Ingmar Bergman films and another more modern, recent film inspiration; Polish Director Paweł Pawlikowski who directed the films Ida and Cold War. I managed to simply create a harsh, shadowy ambience just using minimal light combined with the projections, to conjure up an unsettling, dream like quality within the room. The film poem is also accompanied by composer Peter Copley’s solo viola piece that was written and performed to accompany Lullaby for the original Snow Q installation. The music perfectly enriches the dark, unsettling nature of the Lullaby film poem.

I am now starting to work on my responses to the other two poems and will look forward to seeing how they all relate to the new touring Snow Q Live Lit events in February.

This blog was originally published on Snow Q Project‘s website on 20 January 2020.

Stills and featured image from Lullaby filmpoem by Wendy Pye.