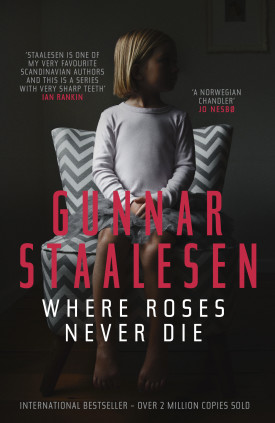 An interview with translator Don Bartlett by West Camel

This summer, his translations of two of Norway’s biggest literary hitters are likely to be filling readers’ beach bags. The spring saw the publication of Some Rain Must Fall – the fifth in Karl Ove Knausgaard’s My Struggle series of intimately autobiographical, supremely literary novels.

Having edited two Staalesen novels for Orenda’s Karen Sullivan, I was interested to find out about Bartlett’s experience of translating the writing of two authors who many would see as sitting at opposite ends of the literary spectrum.

West Camel: The key difference I, as a reader, see between the work of these two writers is the presence of the author in the text. Staalesen, I think, is concealed behind his character, Varg Veum. Knausgaard, to state the obvious, is present everywhere in his work. How does this alter the approach you take to the translation of these novels?

Don Bartlett: Staalesen and Knausgaard write in different genres – wherever you place Knausgaard’s genre. Their novels have very little in common except for the fact that they are first-person narratives. Gunnar’s writing is linear and conforms to certain expectations of crime fiction (plot, chapters, ending etc). You know what to expect: taut dialogue, tight structures, tension, excitement and a resolution.

Karl Ove’s writing goes through a great many stylistic changes, can develop in any direction and is much denser and more emotionally intense. There are no chapters, as such; and it is difficult to speak of a plot, although the beginnings and endings are always well anchored. The character of Karl Ove is at the centre and he goes through a great deal of pain. You identify with him and you are affected.

Despite all these differences, the approach to the translation is the same: you do your best to get inside the characters.

DB: With Staalesen, I have read him widely (something like seventeen novels, now) to get a sense of who Varg Veum is. I know he is an honourable man with a background in child welfare, who fights for social justice. His life hasn’t been easy, but he is loyal to his own and he has humour. You might have a sense of Gunnar in the writing, but it would be wrong to assume Gunnar is Varg Veum.

With Knausgaard, I have also tried to catch the tone and voice of Karl Ove from the novels I have read. At the beginning I translated fifty pages or so and sent them to him to make sure I was on the right lines. A substantial part of the novels is dialogue and this has to feel genuine.

WC: In an interview with The Paris Review, Scott Esposito suggests Knausgaard sounds ‘a tiny bit British’ in your translations. How much of your own, British, voice can you detect in the Knausgaard? Is this inevitable? Is it, even, preferable in order to aid readability?

DB: Scott Esposito probably read the Archipelago version of My Struggle. The editor, Jill Schoolman, quite rightly took out elements that sounded too British (pavement, football, Mum, various idioms), but otherwise she has a very soft touch. If Scott had read the Harvill Secker edition he, as an American, might well have said it sounded very British. However, Karl Ove has said publicly that, when he reads the translation, it sounds and feels like him.

It makes sense for the US version to seem somewhat culturally ‘alien’ – Norway is after all in Europe, closer to us. I would think there is still a strong sense of cultural alien-ness in the British version too. I can’t tell you how much there is of my own voice in My Struggle, but I would imagine it is hard to eradicate totally.

WC: Is it easier to neutralise this sense of a ‘national’ or ‘regional’ translator’s voice in works such as those of Staalesen, where the character is a more distinct type – ie, the hard-bitten PI?

I think finding a voice for a character is the same in any genre. You are guided by the character. I wouldn’t want to neutralise the language to any great degree, for fear of losing colour.

Staalesen’s books are full of linguistic variety and include dialects. I would say that, generally, it is a mistake to imitate the dialects. There are ways of indicating that a strong dialect is spoken. However, some loss is inevitable.

WC: Staalesen’s books, as supreme examples of the crime genre, are plot driven. Does this help the translator in the same way as it does the reader – giving a strong forward impetus that carries you along?

DB: It certainly does. Some translators prefer not to read the original before they start translating so that they are driven by the plot and the excitement. Personally, I prefer to read the original first so that I can be sure of the characters and I’m prepared for any potential translation problems.

WC: Some readers might think that Knausgaard’s novels – being so concerned with the act of memory, with the details of everyday life and with the shaping of character – are far more difficult to read than, for example, a Staalesen crime book. However, as the huge success of the My Struggle series has proved, Knausgaard is extremely readable. What in your opinion makes these authors equally readable, while being so different?

DB: Well, it is certainly true to say that Staalesen doesn’t divide readers in the same way as Knausgaard does, and there is no doubt that he is easier to read.

Staalesen has a proven track record: attractive protagonist, tight plots, good endings, topical themes, psychology, wordplay and humour. It’s Nordic noir, but it is not dour. Furthermore, Gunnar opens our eyes to Norway. Bergen and environs are very much part of the novels – I doubt there are many people who know the history and geography of this area better. I have always considered Gunnar Staalesen a great dramatist, and his newer books have shown he is on an upward trajectory.

The big question is how it is that Knausgaard has touched a nerve, because he certainly has. Some critics at the beginning said he left in the novels all the parts good writing left out. However, for me, it is his ability to describe in such meticulous detail – especially the intimate areas of his life – that makes the novels such compelling reading. By concentrating so minutely on his own life he has reminded many readers – of all ages and cultures, it seems – of elements of their own lives, and they can identify with him. The books have a universality, an intellectual and a personal appeal, and are not afraid to deal with taboo subjects.

WC: With both authors you’re in the process of translating series of their books. Do you feel yourself entering a ‘Staalesen’ mode or a ‘Knausgaard mode’ when you begin a translation; or is it, in fact, purely a ‘translator mode’ for all your work?

DB: I don’t think there is such a thing as a translator mode. You adapt to whoever you translate, much as in acting. The great benefit of a series is that you know beforehand who you are dealing with and there is less to be uncertain about. You become more sure-footed with each book. Changing to a new author is harder, but is rewarding in terms of variety.

WC: Both writers have excellent English. How does this affect what kinds of conversations you have with them about your translations?

DB: Yes, that’s true. However, this has no real influence. Both authors prefer to stay in the background, but have responded immediately on the occasions I have a query. Both are a pleasure to work with. We communicate in English or Danish/Norwegian.

WC: It could be said that Norway, with a population of only 5.2 million, has produced a disproportionate number of internationally acclaimed writers. As translator of several of them, what do you see as the possible reasons for this?

DB: There is a tradition of excellent writers in Norway. Norwegians read widely, Norway supports its writers well and the Norwegian Arts Council and the Norwegian Embassy are very adept at promoting their authors. Also, in Norwegian literature there is strength in depth. I can think of writers who enjoy great success in Norway, but are yet to be recognised in the same way outside Norway. Norwegians would probably see the present period as a golden age.

WC: So, what untranslated Norwegians could you point us to as the next big literary things?

Some Rain Must Fall: My Struggle Book 5 by Karl Ove Knausgaard (translated by Don Bartlett) is published by Harvill Secker. ISBN: 9781846558276

This blog was originally published on ELit Literature House Europe website on 26 September 2016.