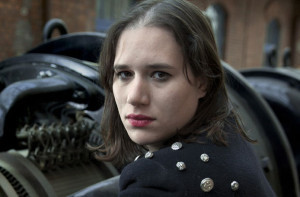 Women on the Edge of a Nervous Breakdown by Katja Perat

I never belonged to the big fans of crime stories. I never knew the collected works of Agatha Christie by heart. When Stieg Larsson became a big thing, I did not even try hard enough to go to the cinema. And then something happened. Girls took over the wheel. Girls who, in spite of the compulsion of collective memory, did not want to write about some traumatised yet magnificent white male detective, but about themselves. As if it became clear, at least to some, that there is nothing more boring under the sun than the fortification of stereotypes that were badly thought out to begin with.

When Gone Girl by Gillian Flynn became a successful bestseller and opened the gates to other contributions from the suburban noir genre, her debut novel, Sharp Objects, rose to the surface as well, and it is in many respects even more sharp-sighted. You know it – a small town, all its superficial homeliness and kindness, too much proximity forcing too much concealment. Good people that force themselves to be good to an extent that it all becomes a bit suspicious.

Sharp Objects is the tale of a young journalist who, out of official duty and without much satisfaction, is brought back to her home town. It is the middle of nowhere. A tightly-knit community, where it is almost impossible to imagine that two young girls could die, and where it is easiest to assume that some stranger must have murdered them. Such a loving community would, of course, never do such a cruel thing to itself.

It is gratifying to notice, above all else, how Gillian Flynn and her genre companions borrow the frame of a murder mystery and through it tell the story of something far more general, far more real, and far more depressing; of the relation that through the tentacles of family ties a woman to the kingdom of suburban staleness.

Suburbanites, or the bourgeoisie in general, has since ever had very clear ideas about how things should be and, even more so, of how people should be. Nobody strives harder to fulfil an ideal of themselves than those who know they will never be able to succeed in doing so.

Stephen King, the master of a certain other genre, in his book Danse Macabre, which aims to be an analysis of this other genre, cleverly noticed that the horror story is largely driven by a conflict between the norm and that which deviates from it. If we would go a little further, we could say that the real conflict is between the norm and the norm. That is, with the fact that the norm is the  glorified common denominator of individuals in a community, something that no one can really satisfy and which for that reason we all try to satisfy that much harder. Such striving is necessarily based on hindrance, concealment, and suppression, all of which are patterns which take their toll. Already in life, it is often destructive, not to mention in art, which feeds on extremes. Just because all our vital forces are channelled towards averting our eyes from it does not make something that exists exist any less; instead, unwatched and out of control, it gains on the strength with which it will, eventually, ambush us and bite our heads off.

In her suburban masterpiece, Gillian Flynn has shown how one of the most unnoticeable and for that reason one of the most effective tools for reproducing a norm and exercising its coercion is precisely the one that on the outside is embellished with genuineness – the family. It is not only about the family being a stifling environment of violence and thus sexual violence; the family is above all a machine that due to its forceful emotional charge has the specific power to punish the individual for their wrong decisions precisely where it hurts the most. Not least because an environment where the splendid combination of relative material comfort and conservatism enables infinite amounts of time and the infinite absence of externalised meaning, and brings one to the end of their wits before one is able to complete two turns.

It appears necessary to conclude that this package of genre literature which draws on everyday life is one of the privileged places that must be visited if we are to understand its psychopathology. And precisely the psychopathology of everyday life, and nothing more glamorous than that, is what, sadly, most of the time plays the most decisive part in our lives.

This blog was originally published on ELit Literature House Europe on 10 September 2015.