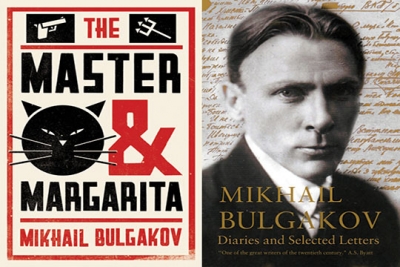 Wanderlust: Great Literature from Around the World is a new, monthly event series at Free Word. Join us on the second Monday of each month to celebrate the best fiction in translation. Please contact Sophie Wardell for information on how you can get involved and join us for this, the fourth event of the series, in partnership with Alma Books.

Mikhail Bulgakov’s The Master and Margarita is an essential work of twentieth-century Russian literature, and as such barely needs an introduction. Simultaneously a fable, a farce and a satire, it manages to create a wholly unique vision of a society in which conformity to political censorship has become second nature. Its surreal absurdity and satire have captivated readers for decades, and it remains profoundly relevant to this day. This contemporary relevance arises from both its content and its tortured publication history, which have made it a case study in writing amidst the strictures of censorship. Bulgakov struggled with Soviet censorship and persecution throughout his career, and did not see his masterpiece published in his lifetime. This persecution, along with Bulgakov’s personal and artistic struggles with the Soviet authorities, is documented in his Diaries and Letters, which offer a captivating portrayal of a prodigiously talented writer who feels his talent going to waste.

Join us for a discussion of Bulgakov’s life featuring two renowned translators of his work; Hugh Aplin, translator of The Master and Margarita, and Roger Cockrell, translator of Bulgakov’s Diaries and Selected Letters. They will discuss the publishing history of Bulgakov’s work, the challenges of translating his unique prose and issues of freedom of expression in the context of these texts, focusing particularly on how censorship impacted on Bulgakov’s life and tracing the evidence of this impact in The Master and Margarita and in his Diaries and Letters. Publisher Alessandro Gallenzi, who has published much of Bulgakov’s bibliography, will chair the discussion.

Hugh Aplin is Head of Russian at Westminster School, London and has translated a number of Russian classics including Chekhov‘s Three Years and Dostoyevsky‘s Double along with Bulgakov’s A Young Doctor’s Notebook and The Diaboliad and Other Stories.

Roger Cockrell has translated numerous works by Mikhail Bulgakov, including Diaries and Selected Letters and Notes on a Cuff and Other Stories, as well as many other Russian works. He is currently Honorary Fellow in Russian at University of Exeter and is the author of several books on Russian literature.

Alessandro Gallenzi is the founder of Hesperus Press, Alma Books and Alma Classics, and the successor of John Calder at the helm of Calder Publications. As well as being a literary publisher with twenty years of experience, he is also a translator, poet, playwright and novelist.