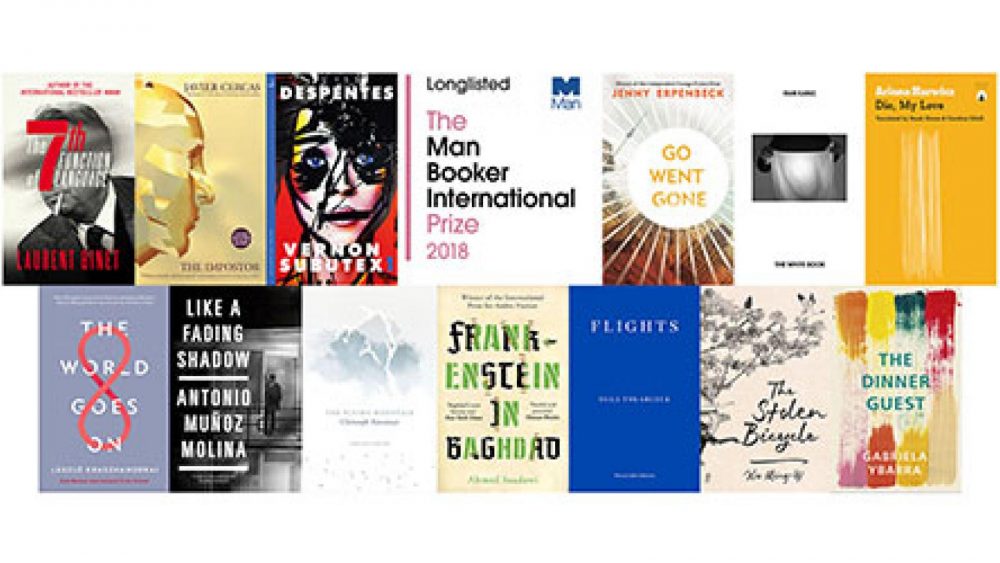 Mar 12, 2018 • No comments
The Man Booker International Prize has revealed the ‘Man Booker Dozen’ of 13 novels in contention for the 2018 prize, which celebrates the finest works of translated fiction from around the world.
The prize is awarded every year for a single book, which is translated into English and published in the UK. Both novels and short-story collections are eligible. The work of translators is equally rewarded, with the £50,000 prize divided between the author and the translator of the winning entry. In addition, each shortlisted author and translator will receive £1,000 each. The judges considered 108 books.
The full 2018 longlist is as follows:
• Laurent Binet (France), translated by Sam Taylor for The 7th Function of Language (Harvill Secker)
• Javier Cercas (Spain), translated by Frank Wynne for The Impostor (MacLehose Press)
• Virginie Despentes (France), translated by Frank Wynne for Vernon Subutex 1 (MacLehose Press)
• Jenny Erpenbeck (Germany), translated by Susan Bernofsky for Go, Went, Gone (Portobello Books)
• Han Kang (South Korea), translated by Deborah Smith for The White Book (Portobello Books)
• Ariana Harwicz (Argentina), translated by Sarah Moses & Carolina Orloff for Die, My Love (Charco Press)
• László Krasznahorkai (Hungary), translated by John Batki, Ottilie Mulzet & George Szirtes for The World Goes On (Tuskar Rock Press)
• Antonio Muñoz Molina (Spain), translated by Camilo A. Ramirez for Like a Fading Shadow (Tuskar Rock Press)
• Christoph Ransmayr (Austria), translated by Simon Pare for The Flying Mountain (Seagull Books)
• Ahmed Saadawi (Iraq), translated by Jonathan Wright for Frankenstein in Baghdad (Oneworld)
• Olga Tokarczuk (Poland), translated by Jennifer Croft for Flights (Fitzcarraldo Editions)
• Wu Ming-Yi (Taiwan), translated by Darryl Sterk for The Stolen Bicycle (Text Publishing)
• Gabriela Ybarra (Spain), translated by Natasha Wimmer, The Dinner Guest (Harvill Secker)
The longlist was selected by a panel of five judges, chaired by Lisa Appignanesi OBE, author and cultural commentator, with Michael Hofmann, poet, reviewer and translator from German; Hari Kunzru, author of five novels including The Impressionist and White Tears; Tim Martin, journalist and literary critic, and Helen Oyeyemi, author of novels, plays and short stories including The Icarus Girl.
Lisa Appignanesi, chair of the 2018 Man Booker International Prize judging panel, says:
Judging this Man Booker International Prize has been an exhilarating adventure. We have travelled across countries, cultures, imaginations, somehow to arrive at what could have been an even longer longlist. It’s one which introduces a wealth of talent, a variety of forms and some writers little known in English before. It has great writing and translating energy and we hope readers take as much pleasure in discovering the work as we did.
The shortlist of six books will be announced on 12 April at an event at Somerset House in London, and the winner of the 2018 prize will be announced on 22 May at a dinner at the Victoria & Albert Museum in London.
The Man Booker International Prize and the Man Booker Prize for Fiction together reward the finest in contemporary fiction from around the globe which is published in the UK and available in English.
The prize is sponsored by Man Group, an active investment management firm which also sponsors the Man Booker Prize for Fiction.
More information here.