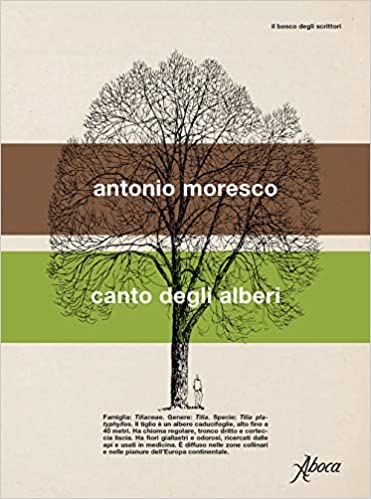 Antonio Moresco wrote Il Canto degli alberi during the first months of lockdown in 2020. Its narrator finds himself in the Italian city of Mantua, where he was born and spent his adolescence, a place he would prefer not to have returned to. On his lone walks around the empty city, he encounters trees growing in abandoned gardens, sprouting from walls, rooted into houses, as well as trees of a kind no one has seen before, multi-coloured trees, upside-down trees, musical trees, hybrid species he can talk to, that introduce him to new truths, in a series of transcendental dialogues about a world in which humanity has been toppled from its position of supremacy.

Ileft the house, walked past the end of Vicolo Deserto, turned the corner and felt a sudden thrill on seeing the stone flank of Leon Battista Alberti’s Basilica of Sant’Andrea, the same building that Dickens had seen from the window of the room where he was staying. ‘How strange, how strange … ’ I think. ‘The whole of human life is under siege, held in check by this invisible invader that is tearing down the empty certainties and frameworks on which it is founded, and yet this marvellous mineral barrier, shaped many centuries ago by a dreamer and by a thousand arms and by a thousand outstretched hands, on wooden scaffolds bound with ropes, is still there, immobile, imperturbable, silent, fearing no contagion. And it will survive like this for a long time, while the human flock will scatter. It fears no viruses, no global warming, has no concern about epidemics, about financial storms that sweep away foolish men and their horizontal economies. And when we have gone it will still be here, with its fossilised dream, over which a thousand minuscule seeds carried by the wind will take root among its stones and will bring life at first
to tiny shrubs and then to saplings clinging to that mineral thought, and no more hands will be there to pull them out. This whole temple cavity in the form of a church will gradually be enveloped by more and more walled trees that will cling to it and hug it and will transform it, too, into one walled tree, into a walled vegetal dream.’

Yesterday evening the whole of Italy became a red zone. So now we are sixty million walled trees.

During my long night wanderings across the phantom city, as I walk along the deserted alleys and past untended gardens and abandoned areas invaded by foliage, when I pass close to walled saplings that sprout from houses, putting my face and my mouth near to those mineral and vegetal gashes that know nothing, I try asking once more: ‘And you, rooted so deep in the walls of people’s homes, do you see anything, do you hear anything?’

And then, little by little, their roots start to relax, and they begin to reply.

Dialogue with the roots

‘Even when we would prefer not to see, not to hear!’ another voice interrupts on top of the first.

‘When we penetrate as far as the rooms where people live, their bedrooms, kitchens … ’

‘Little by little we split the plaster of their walls with our tender apical extremities that emit a damp lubricant and are continually reproducing in order to push onward through the hard mineral material.’

‘Why don’t you want to see or hear?’ I venture to ask.

‘Because sometimes what we see and what we hear is lovely, sometimes horrible … ’

‘Sometimes it fills us with wonder, sometimes it scares us, sickens us … ’

‘Because there are good houses and bad houses … ’

‘And then, because we are there inside the walls of those houses, we too become good roots and bad roots … ’

Their voices overlap each other more and more, continually finishing what the other says.

‘And you, for example, what root are you?’ I ask the root of a small tree embedded in the wall of a dark house with one, single unlit window on the first floor.

It remains silent for a while before answering.

Antonio Moresco was born in Mantua and lives in Milan. He published his first book aged 46 and today occupies a special place in Italian literature, likened to Don DeLillo and Thomas Pynchon, with his provocative and challenging ideas on experimentalism and postmodernism.

Richard Dixon lives in Italy and is a full-time translator from Italian to English. His translations include works by Roberto Calasso, Umberto Eco, Carlo Emilio Gadda, Giacomo Leopardi, and Antonio Moresco, as well as poetry by Franco Buffoni, Eugenio De Signoribus and others.