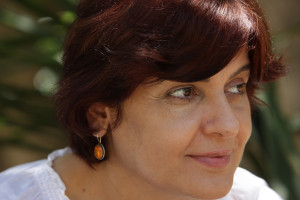 The End of the World by Iman Humaydan

A country, Abistan; a city, Qodsabad; a simplified language, Abilang; a prophet, Abi, the sacred tyrant who represents God on earth; a sacred book, Gkabul and Yolah an almighty god. In his recent novel,  2084: The End of the World, Algerian francophone writer, Boualem Sansal describes a hellish atmosphere in which a sacred tyrannical religion dominates and dehumanizes  a society and deletes its memory. People are amnesics – with no remembered pasts, questions or dreams, as they were made believe that paradise is waiting for them. All of their ideas are derived from the fabricated “truth” of Yolah and his representative, Abi. The dominant, exclusive national language in Abistan, Abilang, ensures the increasing submissiveness of people.  People use simplified words from the sacred book, Gkabul.  Everything they say and do shows obedience and faith to Yolah. The only two activities they can undertake without facing cruel punishment is a pilgrimage on roads monitored by security forces and pray seven times a day.

Inspired by George Orwell’s classic dystopian novel 1984, Sansal’s 2084 is somewhat more optimistic. The protagonist Ati is a man of knowledge, curiosity and thought who uses the past to question the present, especially the legitimacy of the sacred tyranny. He met first an archeologist, and through archeological discoveries, he realizes that people can live happily without domination or religion. With his friend Koa, he questions the rules of obedience and unveils the lies of the tyrannical power.

But Ati, who is the voice of the author, does not go deep in his questioning. In 2084 Sansal directly critiques the religious tyranny of Islam using western notions of democracy and freedom of thinking with no critique of its double standards, like the history of colonization, and present time politics. The work did not take to account of non religious regimes in the Arab world that oppressed their people under the name of   secularism and modernity, and who  used the pretexts of pan-Arabism and nationalism to suppress and manipulate people’s beliefs. These so-called secular regimes encouraged and nurtured fundamentalism and made use of it to control the people.

Though he witnessed how the Algerian authorities and their secret services terrified civilians through violence to prevent the Islamic party from gaining power through elections, these facts do not interest Sansal.  The imaginary Islamic country is presented here as if it comes from nowhere, has no reasons or roots, though Islamism today is forcing us to look back more seriously at global economics and politics.

2084’s monotonous narration merely uses repetition to demonstrate how ugly the “fundamentalism” is. The novel cares more for inciting the west’s fear and nurturing its islamophobia, than for the millions of victims of Islamist violence throughout the Arab world. Crucial questions about how ISIS was born, who was and is funding it and providing it with advanced weapons are rarely heard or written.

In all of Sansal’s seven French-language novels, his hatred of Islam of the Arab world is on display, 2084 is the most recent and most sophisticated . The reader can not avoid its ideological atmosphere. It shows a world divided into good people and bad people, all the way until its end when it loses its narrative thread and literary value. It is full of good ideas based on bad intentions and calls into question whether some of the prizes the novel got were not ideological too.

Sansal has many times expressed his rejection of Algerian Arabisation policies. He describes Abilang much as he has described Arabic as a dead language. This begs the question as to whether or not there is a place for an Arabic reader in Sansal’s creative imagination? What of the millions of Algerians who are adamantly opposed to Islamism, as Sansal is, but love and live the Arabic language? This leads to the further question of who his readership is? Though many French critics did not appreciate his novel, it seems that a French readership would be his target.

Literary works like 2084 reinforce problematic partial understandings of Islam, which are so often manipulated. They do not acknowledge “other” people’s experiences of rethinking and challenging elements of their societies, cultures and values, which they experience differently from each other and from mainstream Western stereotypes about them. This does not allow for ways of thinking about how people stand up to dictatorships – both religious and non-religious – and confront whatever tyranny they are faced with. Works like this underestimate genuine diversity and tolerance; they discourage us from questioning and re-questioning what is true and what is right. Indeed Sansal’s work is a different kind of tyranny in its judgment of the other.

This blog was originally published on ELit Literature House Europe website on 18 July 2016.