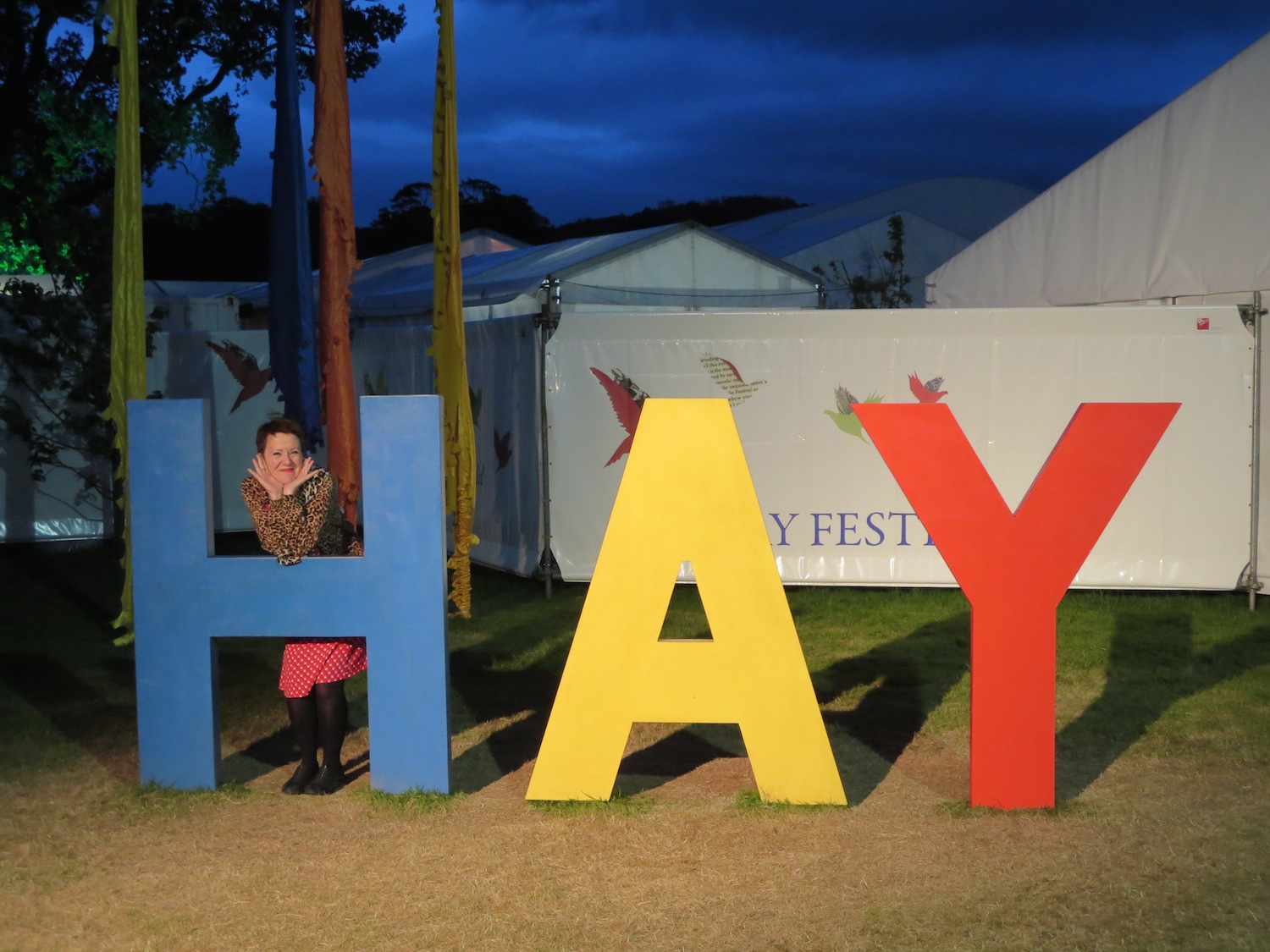 Rosie Goldsmith (All my own words so blame everything on me! If you want to see my Hay Festival photos click here.)

My annual Hay Party (Conference?) began and ended loudly. A frenzied clattering of wind and rain against the ‘walls’ of my first event in Tent-City-on-Wye with authors Vesna Goldsworthy and Kevin Maher declaiming gallantly against the elements. ‘Belgravia is the new Belgrade!’ Vesna proclaimed hoarsely about her superb creation the Russian oligarch ‘Gorsky’, and, ‘The Son of God does not live in London!’ Kevin exclaimed Irish-ly about his novel ‘Last Night on Earth’ (cf. Kate Atkinson on Speed!). Then, at Hay-close-of-play, on Sunday night 31st May, against a backdrop of dismantling tent poles, My-Name’s-Nigel-And-I’m-Ok Kennedy joyfully shivered the Tata Tent timbers by channelling Jimi Hendrix on electric violin: a resounding endorsement of the 2015 Hay Festival.

This was my Seventh Hay-Hosting Year. I was in Seventh Heaven. On arrival, a dazzling new ballroom-sized, green Green Room rose up to meet me, causing Miranda Richardson to magically disappear as she swished in wearing a matching green coat. (And before you accuse me of writing a luvvie-blog, I can assure you that all the ‘Slebs’ wanted to do was eat cake and gossip like the rest of us.) There was Richard E. Grant! Gosh, he’s tall. Jenny Agutter, though, was small and beautiful. Celia Imrie looked business-like on an iPhone. Alex Salmond, briefly deserting Scotland for Wales, was talking at someone; I went for lunch and returned – he was still talking. Clive Anderson greeted me with an excited ‘Aha!’- then realized that he didn’t know me. (Nonetheless I will treasure that Aha moment.) I had a Digested Chat with John Crace, who looked even more exhausted than last year now that he is digesting both Westminster and Books for The Guardian.

Hay: a Festival of Beards? Ed Vere’s was prettiest. Philip Ardagh, the Beard Man himself, was not there but I enjoyed my annual banter with David Crystal, The World’s Best Stand-up Linguist/The Man with The Old Testament Beard. Another year, another brilliant Crystal-Shakespeare book! Surely, I ask him, you were born with a beard? His actor-son Ben – who last time had a beard! – explains that he only ‘does beards’ when roles dictate. Neil Gaiman, on the other hand, has a superbly stroke-able (I resisted) baby beard, and Peter Florence, Hay’s visionary, self-effacing IPIVOD (Independent Party of Inspirational Values and Open Debates) Party Leader sports a modest sprouting, surprising us all the more by uncharacteristically bursting into the bright limelight one night with his outstanding reading of his dramatization of Wilfred Owen’s poems and letters, ‘The Pity of War’. (Peter will deflect all praise but this is my blog!)

More megawatt moments? Laughs with superlative Illustrator Sarah McIntyre, dressed distractingly as a giant green dinosaur. We try to ‘chat’ but it’s hard conversing with a dinosaur. Chris Riddell, her fellow-Illustrator-Par-Excellence (currently joined at hip with NeilHimselfGaiman) also made me laugh, laugh, laugh. What a clever, funny man. The professional funny, clever men Jack Dee, Steve Punt, and Marcus Brigstocke were also all there, as was Will Smith, aka ‘Shitehead Revisted’ (cf. Malcolm Tucker); actor and writer of ‘The Thick Of It’, who launched his first novel at one of my events. ‘Mainlander’ is a superbly readable Jersey-based thriller. But most thrilling was meeting Will Smith, and Chilean author Roberto Ampuero, who shared his event. Roberto has written 14 novels but ‘The Neruda Case’ is – I’m ashamed to say – his first to be translated into English. He’s a great man. Former Culture Minister, Ambassador, Professor, multilingual polyglot.

Every year Hay brings together the world’s greatest writers and thinkers to perform in it’s world-class Hay orchestra – this year, as well as chairing Roberto Ampuero, I was proud to direct performances with Serbian-English writer Vesna Goldsworthy (do read her 21st Century Gatsby novel ‘Gorsky’) and Palestinian-American novelist and activist Susan Abulhawa (the profoundly moving, exquisitely written ‘The Blue Between Sky And Water’). Jenny Erpenbeck, now officially crowned ‘Germany’s best living writer’, and her translator Susan Bernofsky, also ‘popped down’ (ok, it’s not possible to ‘pop down’ to Hay!) for a special event to celebrate their joint win of the 2015 ‘Independent Foreign Fiction Prize’ – a prize that both Hay Festival Americas Director Cristina Fuentes La Roche and I had a stake in, as part-time judges.

So, here I am, on the 7th Day of my 7 Hay events in my 7th Hay year beating that drum on behalf of the Lost Masterpieces of International Fiction (aka ‘shameful shortage of translations’). Such drum-beating is a full-time job for Daniel Hahn, Superstar-Translator, fellow-Hay host and Children’s-Book Specialist. And trapped in a tent together, with no escape, for the first time in Hay history, Danny was forced to eat lunch with me – a rare memory to share with my grandchildren.

Danny and I were among a happy Huddle of Hay Hosts – colleagues Georgina Godwin, Francine Stock, Clemency Burton-Hill and many more. Patrick, the young son of presenter, novelist and journalist Stephanie Merritt (yes, all in one person!) did a mean impersonation of our Great National Treasure, Alan Bennett. My heart missed a beat because there he was over there on the sofa! I phoned my Mum. (‘Mum, you’ll never guess, but Monty Don and Alan Bennett are sitting on the same sofa!) Ben Okri, on the other hand, had no sofa time. The Great Disappearing Poet was late and when I suggested fixing his beret with a tracker, the ever-charming, disarmingly-lovely Ben refused with ‘No one touches my beret!’ TheMostGlamourousWomanInPublishing, Caroline Michel, and I compared shoes and views – the two may officially coexist, thanks to Polly Vernon pronouncing in her event that there is such a thing as a ‘Hot Feminist’.

Talking of shoes (has it really taken me this long?), I brought my signature (elderly) red patent heels with me to Hay specifically to outshine Caroline Michel, who deliberately wore her silver stilettos knowing that we were both speaking on the same panel. She ‘won’ – ofcourse. That panel, a ‘National Conversation’ created by Writers Centre Norwich, entitled ‘The Invisible Woman’, was revolutionary; a rallying cry from prize-winning author and literary-activist Kamila Shamsie to make 2018 The Year Against Gender Bias and For Women in Publishing. Join the revolution at #NatConv.

But I still got to wear my red shoes! A cheap trick on my part to distract from the blazingly beautiful, mind-bending prose of David (Cloud Atlas) Mitchell and the gorgeously ghostly fiction of Tiffany Murray when I hosted an event featuring her so-good novel ‘Sugar Hall’ and his first ever-reading of ‘Slade House’ – Mr. Mitchell’s first short novel, dear readers, to be launched on 29th October, the date the story ‘Slade House’ ends. Clever. Yes, it is a Mitchell Masterpiece. (And, for all you fashion journalists out there, both Mitchell and Murray wore boring shoes not worth mentioning.)

Statistically, financially, culturally, this has been a record year for the Hay Festival. It’s also been – my own observation – a record year for women at Hay. Readers, audiences, writers, speakers, presenters. Outside in ‘the real world’, I am daily-depressed about the absence/subjugation of women in all areas of public life. Here at Hay, with Sandi Toksvig announcing the creation of The Women’s Equality Party, and all the other fighting females over all the other Hay Days, from Polly ‘Hot Feminist’ Vernon reminding us that fashion is both fun and economically and creatively important (the Creative Industries supply up to 10 % of the GDP) to Virginia Nicholson, the gifted social historian and Virginia Woolf lookalike (her Great Aunt!), lifting the lid on ‘Perfect Wives and Ideal Homes’ in her riveting page-turning examination of 1950s women. In the immediate post-war period, she told a packed Hay audience, our mothers had dreams of perfect lives and ideal homes; the reality was often depression, austerity, humiliation and struggle.

For Marian Keyes, and so many of us, reality is still a struggle. What a megawatt personality she has. She is brave, beautiful, talented and my personal ‘Hay Woman Of The Year’. Marian has re-emerged into public life after a serious breakdown and depression to write a Number One best-selling novel ‘The Woman Who Stole My Life’, and to regale a packed Hay tent with her wit, wisdom and heartfelt honesty. It was electric. It was moving. The applause was deafening. As I said, my Hay Festival began and ended loudly. A resounding ‘yes’ for IPIVOD!