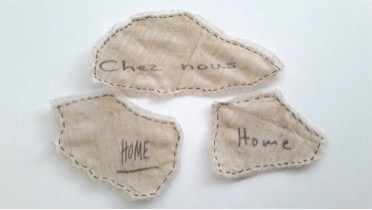 Talking Transformations. Home on the Move

A project of poetry, translation, sound and film art with a programme of associated of exhibitions and events. Devised and curated by Manuela Perteghella & Ricarda Vidal

Talking Transformations. Home on the Move explores what ‘home’ means to us at a time when notions of ‘home’ in Europe are becoming more fluid, changed and challenged by unprecedented migration. Ideas and constructions of home are intimately connected to language: the mother tongue, the foreign language and, between them, translation. Hence Talking Transformations employs poetry and art translation to examine notions of ‘home’ in relation to migration. On the one hand, EU citizens are taking advantage of freedom of movement choosing their place of study, work or retirement across the Union and on the other, economic migrants, refugees, exiles and other displaced communities from outside the EU are arriving in large numbers. This confluence of culturally and linguistically diverse communities in European societies reframes traditional ideas of organic ‘nationhood’, identity and culture, and naturally ideas of ‘home’.

The project was born in the aftermath of the UK Referendum to leave the EU in June 2016. Hence, for our first project we focused on Britain’s relationship with the EU. In spring 2017 we ran three community workshops in England (with poet Deryn Rees-Jones) and Poland (with poet Rafał Gawin) to explore the many facets of home with local people through group discussions and creative writing exercises. On the basis of these workshops and the creative material produced by participants we commissioned Deryn and Rafał to each write a poem about home. Deryn’s “Home” and Rafał’s “DOM. KONSTRUKCJA W PROCESIE SĄDOWYM” (“Home. Structure on Trial”) were then sent on a migratory journey around Europe. “Home” travelled through literary translation via France to Spain and back and “Dom…” was sent via Romania to Britain and back. In each country they visited the poems were also translated into film art. The artists, poets and translators who collaborated with us were Teodor Ajder (RO), Elise Aru (FR), Heather Connelly (UK) in collaboration with Belén Cerezo (SP), Noèlia Díaz Vicedo (SP), Marta Dziurosz (PL), Rafał Gawin (PL), ​Anna Hyde (PL), Zuzanna Janin (PL), Jozefina Komporaly (RO), Benoît Laffiché (FR), Domingo Martínez (SP), Timothy Mathews (UK), Kate McMillan (UK), Ghenadie Popescu (RO), Deryn Rees-Jones (UK), Silvia Terrón (SP), and Sally Waterman (UK).

The results of the poems’ journeys can be see at our travelling exhibition “Home on the Move”. After stops at the Whitstable Biennale (9-10 June), the Ledbury Poetry Festival (29 June to 8 July), the exhibition will open on 26th July at the Poetry Library, Southbank Centre, London, where it will remain on show until 23rd September.

Visitors to the exhibition are able to read the two poems in ten different versions (‘HOME’ is available in three English versions, French and Spanish, and ‘DOM…’ in two Polish versions, two English versions and in Romanian), to watch the artists’ visual interpretations in 7 film versions and to listen to the various language versions. While the exhibitions in Whitstable and Ledbury included an immersive sound collage, the London exhibition will open with a multilingual performance of the two poems by the poets and their translators. The London show will also contain one new work, a mixed-media work created by artist, translator and text-maker Elise Aru.

We also invite visitors to take away poem-objects, little folded posters printed with the poems and their journeys. These posters, designed by Ricarda Vidal, can be folded into a little box, a container of memories of ‘home’, or a structure, a shelter, a piece of luggage for our journeys – and they can also be the basis for visitors’ own translations.

Each exhibition was accompanied by a series of associated events including a community workshop exploring ‘home’ through poetry, film art and translation led by Ricarda Vidal (Whitstable Biennale), hands-on poetry translation workshops  with poet & translator Noèlia Díaz-Vicedo (Ledbury Poetry Festival), and an afternoon of poetry readings and discussion with audience with Deryn Rees-Jones, Rafał Gawin and Anna Hyde (Ledbury Poetry Festival). Besides the public events, Manuela and Ricarda have also delivered poetry and creative arts workshops to local secondary schools in Worcestershire & Herefordshire during the Ledbury Poetry Festival, and will be delivering similar workshops for primary schools in Lambeth and Southwark. Poetry created during the workshops will be on display at the Poetry Library in our growing Concertina Book of ‘Home’.

To listen to our poets and translators reading their texts click here.

We want Talking Transformations to become a platform for debate and define home for those who move and for those who stay put. And, at the same time, we aim to foster a cultural dialogue between native and migrant communities, hoping to introduce a more positive debate on the issue of migration and, naturally, to make people excited about languages – their native tongue as well as that of others.

We are employing both linguistic and artistic translation as the interpolation, overlapping, -fertilisation of different modes and senses allows us to investigate notions and perceptions of ‘home’ from different, yet complementing perspectives. The use of the ‘visual’ for example, in the filmic translations of the poems, underlines the creativity involved in translation and makes the original poetry accessible through additional senses. The act of translation, an unstable, interpretative and creative process, adds another layer and another dimension.

A free, one-day symposium “Home, Belonging ad Language” accompanying the main theme of ‘home’ will be held at King’s College London on the 27 July 2018, in collaboration with Maria-José Blanco. We will be exploring notions of home and belonging in relation to migration, identity and language, and discussing how the traditional idea of ‘home’ as a fixed, defined place that can easily be named, may, indeed, be crumbling. 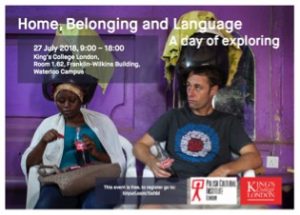 We will address the following questions: ‘How do we each configure our own understanding of what home means, of what belonging means? How are ‘home’ and ‘belonging’ constructed in politics or in public discourse? How are ‘home’ or ‘belonging’ articulated through language? What is lost or gained in translation?’

Further information about the Symposium and how to book a place please click here.

Above all, Talking Transformations invites the public to contribute to and participate in the ongoing project, by making and sending us their own translations of ‘home’, inspired by the artwork, the films, the poems exhibited or by their own, individual, special ideas of what home is.

Dr Manuela Perteghella is a curator, creative producer and translation scholar. She has published research in the field of literary and theatre translation, promoting the theory of translation as creative practice (Translation and Creativity, Continuum 2006; One Poem in Search of a Translator, Peter Lang 2008; Staging and Performing Translation, Palgrave 2011). She has taught translation at UK universities, and worked for theatre companies. Manuela blogs on The Creative Literary Studio, on the art of ‘text-making’ and has co-curated TransARTation! (http://transartation.co.uk/) an exhibition of inter-art translation. Talking Transformations. Home on the Move, a multilingual, artistic exploration of ‘home’ in Europe is her first project with Ricarda Vidal.

Ricarda Vidal is a researcher, translator and curator, teaching in the Department of Culture, Media & Creative Industries at King’s College London. She is the founder of Translation Games, a collaborative research and exhibitions project into translation across languages and the fine arts (www.translationgames.net). Together with Manuela Perteghella she leads Talking Transformations: Home on the Move (www.talkingtransformations.eu) and with artist Sam Treadaway she runs the bookwork project Revolve:R (www.revolve-r.com). Ricarda is the author of Death and Desire in Car Crash Culture: A Century of Romantic Futurisms (2013) and co-editor (with Maria-José Blanco) of The Power of Death: Contemporary Reflections on Death in Western Society (2014/2017) and (with Ingo Cornils) of Alternative Worlds: Blue-Sky Thinking since 1900 (2014). Her most recent book, Translating across Sensory and Linguistic Borders: Intersemiotic Journeys across Media (co-edited with Madeleine Campbell) will be published with Palgrave in autumn 2018.