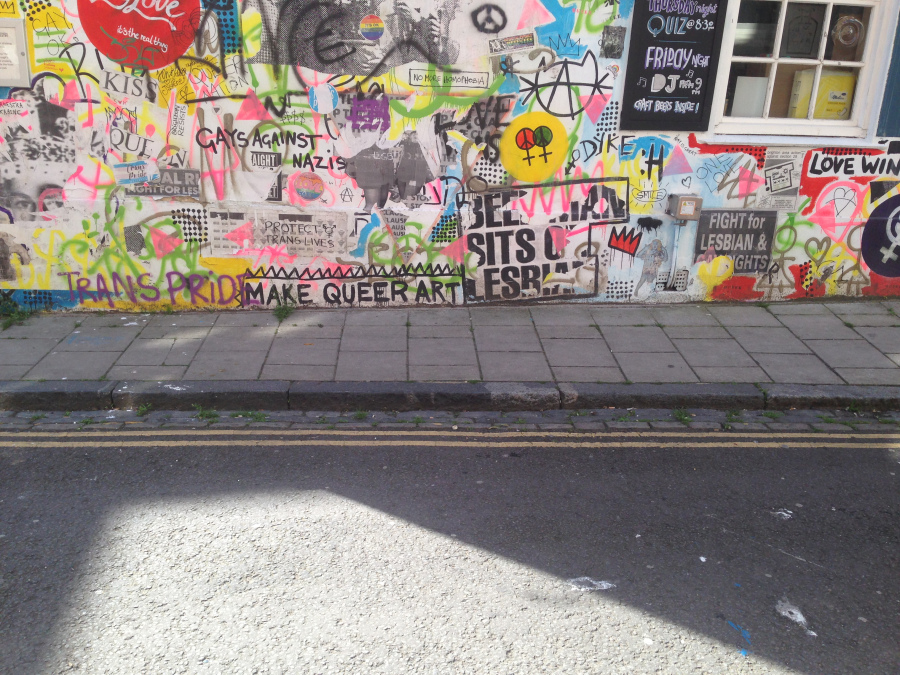 If you’ve been following our posts you know by now what a powerful source – Hans Christian Andersen’s Snow Queen story – we chose for our collaborative project. We are Snow Q. What does the Q stand for? Questions? Queer? Quest? Queen? All of the above and more. Unusually, most of the protagonists in the story were women.  Maria wanted to build on that, while she also knew that she wanted the two young protagonists – a little older than Andersen’s children in her portrayal – not to represent girl and boy in a conventional way.  However she saw them as still caught up in a world which discriminates on a range of counts including gender, a world which destroys the planet, which forces people to flee from their homes or to live in poverty.

Growing up I looked like a boy, got mistaken for a boy (to my delight) and had no desire to become a woman (or an adult possibly.) Grown women wore pinchy shoes and they didn’t climb trees, did they? Hard to tell now how much of that came from inside or outside. Boys had so many freedoms denied to me as a girl. My frantic mother carted me off to see a psychologist. As I grew older it got worse, since I was attracted to other girls as well as boys. Later I found women (and men) who were detonating the notion of what being a woman means in this society. Ever since, I have embraced identifying as a woman. I still get mistaken for a man from time to time.

Back in those 1960’s/70’s, Ursula le Guin, Marge Piercy, June Arnold all wrote books with characters who either switched genders or defied categorisation. They used pronouns such as per or na, instead of he and she. I also read writers like Sheila Rowbotham* on the dominance of the male point of view, Don Milligan* on gender and sexuality. There were countless books, papers, meetings and discussions on how inextricably the rigid male-female dichotomy was linked to racism, class, all the ways of dividing people. I realised I was part of something bigger. I joined campaigns and protests, became a feminist.

Perhaps because it was so hard for me to communicate with the generation before mine when I was growing up and also since I’m passionate about language,  I’m interested in the different ways older and younger people talk about the world. Younger people are also challenging preconceptions about gender. They’re using words like ‘non-binary’ which reminds me of my experience but I wanted to hear how they see it so I asked some friends:

Tate and Jude Fletcher wrote to me saying:

“A non binary person is neither male nor female. They would place themselves on the spectrum somewhere between or outside of those two genders. In Western culture this can be little understood, however there are many cultures around the world that recognise more than two genders and have done for many generations. Non binary people have always existed in our society but it is only fairly recently that they have been able to have a voice and be more visible. Often non binary people use different pronouns to the more widely recognised he/him, she/her. One alternative is the use of they/them pronouns. This is often argued to be grammatically incorrect which is in fact false. It is usual to use ‘they’ when speaking about a single person whose gender is unknown to you. For example: “Someone has left their phone here. I wonder if they’ve realised?” There is no correct way to present as non binary. You can present in a feminine, masculine or androgynous way. So a person’s gender should never be assumed based on their appearance.

It would be a big step forwards in making non binary and trans people feel more at ease if it became the norm when meeting someone for the first time to ask what pronouns they use as well as their name. A non binary gender is just as valid as male or female and hopefully this will be recognised legally in the not too distant future.”

Tate and Jude also pointed out that being non binary can mean different things to different people and and that non binary people can present in many ways. You can’t lump any people all together. I asked writer Elly J Morris what non-binary meant to her specifically:

“I’m a nonbinary person, specifically a genderfluid femme. It’s taken me a long time to decide on the words that best describe how I feel about my gender, and for me they work perfectly. Nonbinary in the rejection of the gender binary, genderfluid in my presentation and the way I feel on different days, and femme in my embracing of feminine energy separate to being born AFAB (assigned female at birth).

Engaging with gender in a deliberate way gives me power and agency in a way that being a cis women never did. As well as being a political statement, my gender is a feeling I have within me. I do experience dysphoria, but not as severely as others. It’s more of a frustration with not being able to present how I’d like to all of the time.”

This blog was originally published on Snow Q Project‘s website on 21 September 2018.