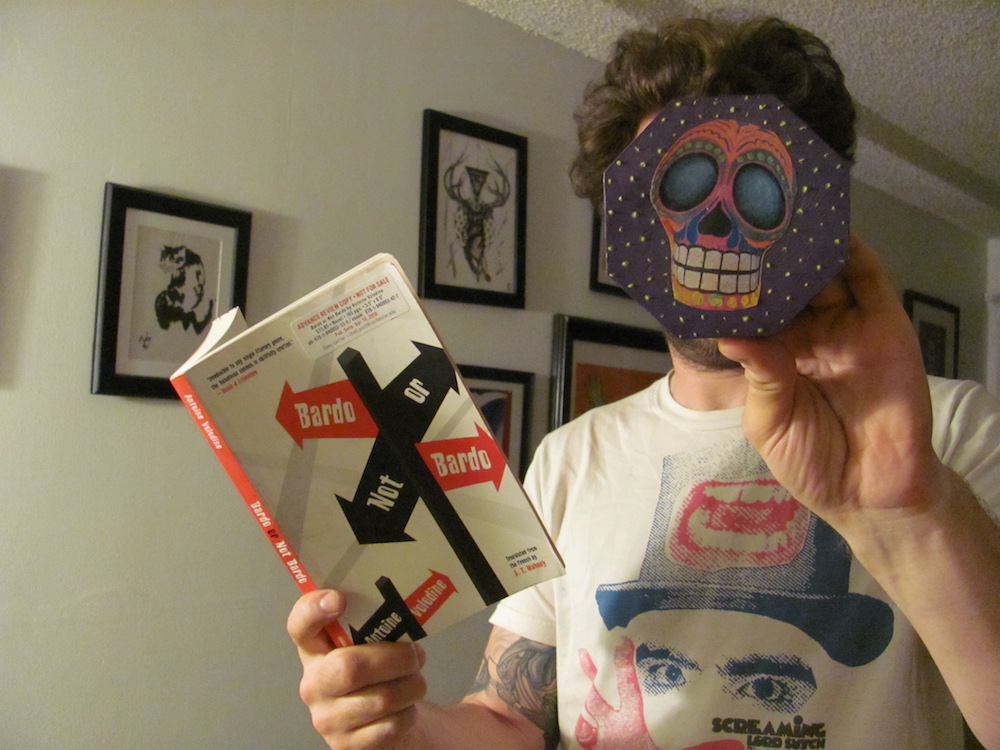 Life is full of choices, death not quite as much. Even if you believe the soul travels on after the body is left behind, its destination has been determined by choices you made while still breathing. That, at least, has been the Western view since before even Hamlet’s speculative musings on the matter. Elsewhere in the world, however, beyond the things dreamt of in his philosophy, other beliefs present a broader range of choices.

Antoine Volodine’s latest novel, Bardo or not Bardo, sets itself in and around the afterlife of Buddhist belief. In this system, souls wander in a temporary interzone – the Bardo – for forty-nine days, guided by passages from the Book of the Dead read over their corpses back in the temporal world. If they follow the tome’s advice, they’ll take themselves ultimately to Nirvana; should they choose a path less wise, reincarnation awaits them, as man or, more likely, beast.

Volodine’s exploration of this murky otherworld consists of seven vignettes in which characters possessed of more or less wisdom navigate the Bardo, with more or less success. It is a realm of unsure form: time passes differently, space is strangely malleable, and the protagonists’ disorientation serves only to disrupt their efforts to heed the guidance offered by their vigilant lamas. For their part, the attendants in the real world credit their wards with far greater rational judgement than they actually possess, and, without knowing whether or not the readings reach these dead souls, the attendants can only hope they make the journey to Nirvana.

This all sounds portentous; but just as the title parodies Shakespeare’s most famous line and is further undercut by “Bardo” also being the name of the UK’s 1982 entrants to the Eurovision Song Contest, so the sacred rituals of the Book and the lost souls’ wanderings are continually knocked askew by misunderstandings and interruptions. In the first episode the wrong books are fetched from a monastery library, so rather than being given directions to the bright light of Nirvana, the deceased is read to from a cookbook and from an anthology of surrealist aphorisms. Elsewhere, as a monk gears up to read another chapter (from the correct book this time), a moment of strangely Zen-like chaos intrudes from the adjacent marketplace: “Suddenly a quarrel breaks out around a medium-ripe durian, which the vendor is refusing to slice for free. It is a harsh and uncouth discussion.” One feels that Volodine did not waste time choosing whether to ironise or not to ironise.

The effect is so off-key and misdirecting that even the most single-minded of characters (let alone readers) would struggle to save themselves. But single-minded is exactly what most of Volodine’s characters are not. While some are merely schizophrenic, others are seemingly fully bifurcated souls, stalking themselves through their Bardo and accusing their other whole of their own murder. In several of the episodes the protagonists narrate their own actions in the third person, alongside the action they describe. In all these cases, the personalities are unwittingly split, though you feel they would be no better off if they were selves-aware – the choices they make seem to be the only ones they are really capable of. One poor chap sleeps his way through most of his forty-nine days, waking up occasionally to trip over things in the dark and deny that he’s even dead. He is powerless in the end to avoid being reborn as a spider. Elsewhere an ex-con and a former mental patient eschew both Nirvana and re-incarnation and decide to stay put in Bardo; embittered by a life of denied choices, they deny themselves the ones they have left.

Which brings us back to this life of choices and what we are to do with it. One feels this is the real object of Volodine’s meditation. In one striking instance, he throws a choice at the reader: to read the next few pages or move on to the next chapter. Obviously you can’t – it’s a crucial juncture in the book. But then I would say that – I never skip sections. Likewise, I’ll tell you that reading Bardo or not Bardo is a very good choice, but really you’ll have to decide for yourself.

Simon Easterman is a school teacher who lives in Vancouver, BC with his partner and two cats. He likes crosswords, craft beer and cycle touring, and plenty of other things that don’t really qualify him to review books.

Bardo or not Bardo