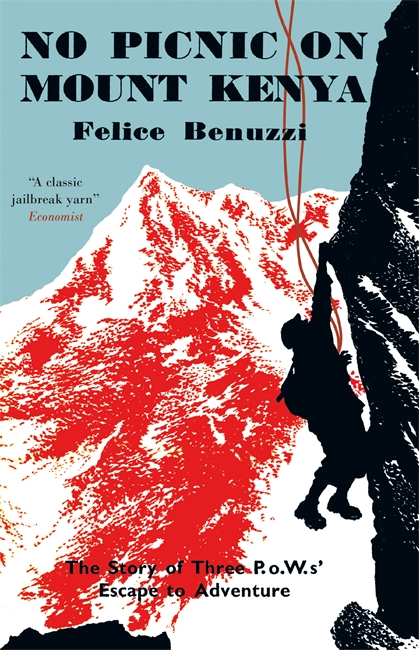 No Picnic on Mount Kenya is neither a war memoir nor the travel log of an exotic mountaineering expedition; neither history pure and unimpeachable, nor a novel where the imagination is given free rein; it is neither biography nor documentary. It is, and explosively, all of the above – a grippingly beguiling tale as well as an unsettling testimony of the troubled, almost sinister relationship that post-Fascist Italy entertained towards the memory of its past. No Picnic on Mount Kenya is as much a startling, gorgeously written story, as it is an act of total erasure, a gesture of absolute control over words and their absence.

Felice Benuzzi’s book begins with a nightmarish ‘mirage’: a description that conjures up the most horrifying ghosts and blood-curdling images: PoWs arriving at a concentration camp in a long cattle-truck ‘coach’. This is the first shock that sends premonitions and adrenaline soaring, the first cold plunge into the enchantment and the darkness behind the blinding East African sun. In 1948, when the book was first published in Milan by the Eroica Press (which during the war had aligned itself with the Futurists and Mussolini), such a beginning could not fail to evoke battered Jewish prisoners in cattle-cars arriving at Dachau, Auschwitz or Treblinka from every patch of earth under Nazi (and Fascist) rule. Within sentences however, we have an anti-climax that causes double-vision: these PoWs have clout and whimsy, a sense of dignified resistance even in their abandonment to fate: how long, they wonder, do they have to stay there?

The camp is a dehumanising prison, a place where life, individual and collective, loses coherence, meaning, direction, a before and after. Yet the suspension of existence, the assault against personal presence, suggests a superhuman challenge against an invincible element (an expedition to the South Pole à la Shackleton) rather than a martyric struggle against human evil. Ascetic constraints, military discipline and privations provide a Nietzschean cliché: a ready, gutsy, witty response to a superhuman dare.

This is a rambunctious, beautifully written yarn, with old-fashioned lyricism and eloquence, a reverence for the right word and the lilt and elegance of phrases, the undulations of plot and the palette of characters. It is as flippant, delightful and endearing, a true curio of the noblest vintage, as it is eerily unsettling in its total blinkering from any historical reality.

There are exquisitely expressive surrealist descriptions, an irresistible seductiveness once one becomes absorbed in the allure of the mountain, wilderness, a spirit beyond the grasp of mere man. It is the ultimate escapist novel.

If we read No Picnic on Mount Kenya with one eye closed, the eye of conscience, we are transported to worlds of mystery and wisdom that no longer exist. We can no longer write like this (and I say this with genuine regret), our stories are too concentric, too absorbed in a certain narcissistic jouissance. Benuzzi writes unselfconsciously, seduced by voices that speak of other realities and human potential. He possesses a linguistic sensitivity and richness that are intoxicating, soothing, reassuring. Mount Kenya inevitably becomes a symbol of obstacles surmounted, of eternity, of stability in a world that is collapsing, of a spiritual and mental ascent in the midst of a spiritual vacuum and intellectual mire.

No Picnic on Mount Kenya

Re-published in a new edition in 2016 by MacLehose Press

*Note from our reviewer: Benuzzi also wrote in English. He cites R.M. Graham as being instrumental in “converting his English into a more readable language”. The section “The Unknown” at the end of the book is translated, together with a poem, by Howard Curtis.