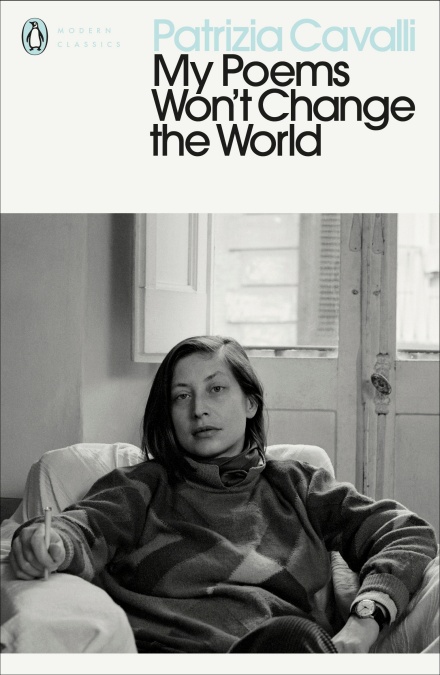 Patrizia Cavalli is a poet, translator and playwright, whose work commands rapturous attention in her native Italy. Limited translation of her poetry to date has meant Cavalli is not as well known to an international readership as she should be, but it is hoped that the publication of this slim but important volume will go some way to remedying this injustice. Edited by Egyptian-Italian author Gini Alhadeff and including translations from notable names from the world of contemporary poetry, including David Shapiro, Jorie Graham, and Susan Stewart, My Poems Won’t Change the World is a selection of work from five of Cavalli’s six collections of poetry published over the last forty years.

Opening with work from her first collection of poems, published in 1972, we find Cavalli tackling subjects as varied as loss, desire, mutability and the limitations of knowledge. Delivered in her already characteristically nonchalant voice, these short, epigrammatic poems, often with structures that mirror syllogisms, aphorisms and other philosophical forms, come across as much the work of a budding metaphysician as that of a poet:

Indeed, referring to her direct, analytical voice and unsentimental approach to life’s big questions, Italian philosopher Giorgio Agamben said of Cavalli that she had written ‘the most intensely ethical poetry in Italian literature of the twentieth century’. But it is Cavalli’s talent as a poet and her ability to ground the cerebral within the domestic that means no matter how grand her subject matter her poems always succeed in speaking humorously and intimately to the reader. More than many other poets, to read Cavalli is to feel very keenly that one is being confided in.

Poems from later collections – The Forever Open Theatre (‘Sempre aperto teatro’) and Lazy Gods, Lazy Fate (‘Pigre divinità e pigra sorte’) originally published from the early eighties to the early noughties – go on to draw out possibly Cavalli’s most pressing personal and poetic preoccupation: romantic love. Often decorated with the title of ‘love poet’, Cavalli might be considered closer to John Donne than Pablo Neruda when it comes to expressing matters of the heart. Although undeniably optimistic at times, her poetry embraces the contradictory delights and disappointments of being in love, offering a pragmatic and honest view of the imperfect, messy variant that most of us must suffer and enjoy during our short lives. For Cavalli, love is both a salve and a wound:

Alhadeff has done a very commendable job editing this volume, providing many of the translations herself in addition to assembling an impressive line-up of co-translators. Alhadeff’s end note touching on her friendship with Cavalli adds a nice bit of biographical colour, and the translators’ commentaries provide some interesting insights into the process of bringing this significant body of work into the orbit of the anglophone poetry world. We can only hope Cavalli’s complete collected works is just around the corner.

MY POEMS WON’T CHANGE THE WORLD

Joseph Dance is an archivist, writer and poet. He previously worked as Head Archivist at the Marx Memorial Library and Workers’ School and has a BA and MA from the University of Cambridge in English Literature. He is currently working on his first collection of poetry.