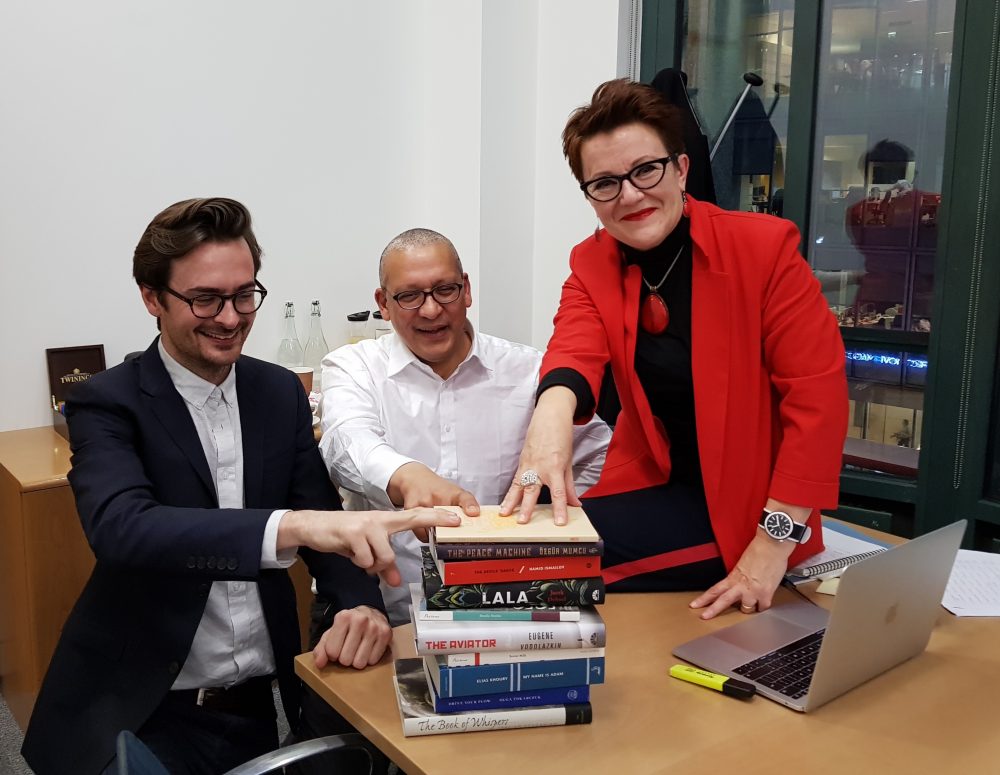 In extreme, snow-bound isolation, an elderly woman reads the runes of human and animal death, guided by the stars and visionary poetry.

Philip Roth-type feel to the mise-en-scène: extreme, snowed-in isolation; the peculiarity of distinct individuals. The central narrator figure, an elderly woman, gives the discursive digressions coherence in her unfolding character. Vulnerable, frail and pro-active, she is an enquiring agent into nature – human and animal – death, society and the stars; a sleuth by horoscope and translator of visionary poet William Blake.

A sceptical, ironic, burdened and yet life-affirming engagement with the past as a living legacy in the lives of young Poles.

Approaching dementia, Lala recalls her life and times to her grandson, the writer. He frames his book of her life as something frameless, blurred – vignettes and snippets of well-worn stories – using the discursive, digressive freedom that affords him to fold past into present social life, a seamless melding of ancestors and contemporary Poles. As such, the young and the living share the life of the long departed, the continuity of Polish history, culture and society.

A dual narrative of mother and daughter in Soviet Latvia, burdened by the mother’s depression and spiritual ennui which is unable to adjust to a Soviet reality of bitterness.

Born into the violence of WWII, and growing up with the reality of Soviet repression, a woman becomes a doctor but is unable to heal herself of the wounds left by the fracture of her family and society. Unable to fully nurture her own daughter or respond to those who try to help, she dies as the communist system collapses, unable to see it.

The Book of Whispers is a self-consciously intellectual take on how to capture a people who have disappeared, who have been placed ‘outside the mirror’ and yet persist through echoes of their stories, presences and ghostly life.

Born into a milieu of Armenians in Romania, the writer grows up to recognise the imprint in those around him of an obliquely held culture of experience, thought and communication. We meet the Armenians – in their wanderings, their poverty, persecution, murder, displacement and exile. Theirs is a culture in which whispers are stifled tears, which sees through this mirror in a whisper. This book is a silent reading of their collective and individual memories.

A moving portrayal of people on whom disaster has fallen, shadows of their former selves, who survive through acts of love, solidarity and care.

A novella constructed from the interlocking stories of several writers, it tells of life in the Shatila refugee camp – the betrayals, deaths, addictions, inequalities and exploitations, yet also the gentleness of spirit, solidarity and care. They are a people who survive together.

A novel which summons the beauty and death of medieval Uzbek court poetry to counter the darkness and cruelty of the Stalinist purges.

Caught up in the Soviet purges of the 1930s, an Uzbek writer, Abdalla, still writes his recently planned novel in his mind. He thinks and feels through Uzbek history and culture, superimposing 12th century court intrigues – the jealousy of Queens and paranoia of Emirs – in part to make sense of the random meaninglessness of Stalinist terror.

A tremendous, exuberant read in which magical realism collides with rational explanation and fable.

The complexity of Israeli experience and the Palestinian mirroring of suffering and exile is rescued from its intended ashes.

A complicated read for the complex, still unresolved story of the Palestinian Nakba, or disaster. The novel purports to be the manuscript of a New York based Israeli Palestinian, rescued from his death by fire and published against his will. Poetry, film, politics, history, culture and personal story blend and interact in the writer’s conflicted autobiography.

A slim, delicately beautiful series of meditations on Islamic culture and European modernity in the Moroccan mind and imagination.

A moving, beautifully written rendering of literature as a form of calligraphy that creates new images of the world in the life of a young reader. Subtle, open-ended vignettes of the education, reading, family and street life of a young Moroccan boy conjure a changing world of losses and gains.

This high concept novel is a great and understandably popular achievement.

A guy wakes up with a slowly returning memory of events a century ago. For him, and for the reader, the past is experienced as present, we are there with him in a unique alteration of narrative time. Like Robinson Crusoe before him, we have to make sense of then and now, there and here. The truth slowly dawns.

Gabriel Gbadamosi is a poet, playwright, and novelist. His London novel Vauxhall (2013) won the Tibor Jones Pageturner Prize and Best International Novel at the Sharjah Book Fair. He was AHRC Creative and Performing Arts Fellow at the Pinter Centre, Goldsmiths, a Judith E. Wilson Fellow for Creative Writing at Cambridge University and Royal Literary Fund Fellow at City & Guilds of London Art School. He was a presenter of the arts and ideas programme Night Waves on BBC Radio3, a director of Wasafiri magazine for international contemporary writing and is a trustee of Arcola Theatre, London. Visit his website.