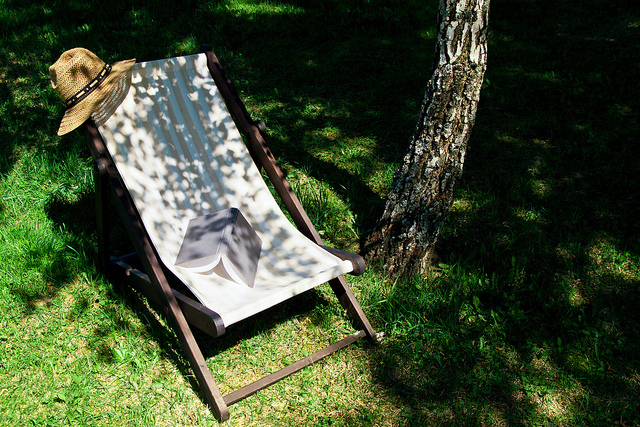 Musings under the Sun by Meike Ziervogel

A couple of weeks ago the UK publishing world was hit by a little storm. Kamila Shamsie, a well-known British novelist, has called on publishers in a Guardian article to bring out only female authors in 2018. She wishes to redress an apparent imbalance in male and female published writers. A couple of publishing colleagues have responded and taken up the challenge.

When I tell the Nymph, she shrugs her shoulders: ‘Been there, done that.’ In 2012 our entire annual programme consisted of female authors. And overall we have a beautiful gender balance: 21 authors in total, 10 women, 11 men.

‘And may I be frank,’ she continues, ‘they are looking for a solution in the wrong place.’

We are having this conversation in the pocket-size garden of Peirene HQ. A beautiful afternoon with blue sky, sunshine and a lovely breeze. Peirene, in shorts and belly top, is lying on a deckchair under the cherry tree. On her kindle she is reading a Serbian novella in French translation to see if it might be a book for us in 2017 or 2018. I’m sitting at the table in front of my laptop, line editing our first 2016 title, The Man I Became by Flemish Peter Verhelst.

Peirene moves her sunglasses to the tip of her nose and directs the gaze over the brim straight at me.

‘As you very well know, the problem lies with the women writers and women readers.’ She sighs, adjust her shades and reaches with her free hand for the glass of lemonade that is standing on a little table next to her.

At the London Bookfair in April we met a number of national and international publishers who are desperate for more submissions by female literary fiction writers. The critical mass is missing. And as for readers, although the majority in the UK are women, most of them lack courage to step out of their comfort zone of thrillers and romance. And if they do, they often need to be guided by major prize winners. At the Roaming Store we spend most of our time trying to persuade (mainly) female readers to take a risk with something different. Men seem to be far quicker to be willing to make a bet on a new reading experience.

Peirene walks into the house and returns a few minutes later in her bikini. She hands me the sun cream. While I rub her back, I ask: ‘What about the Serbian novella, any good?’ The Nymph shakes her head. ‘No. And initially I was so excited by the prospect of publishing a Balkan story. But I’m on page 50. So far nothing has happened and I’m utterly bored.’ She rolls her eyes, adjusts her bikini and spreads her towel onto the grass. She lies down on her front and covers her head with a T-Shirt.

‘Is the author male or female?’ I wonder.

‘Don’t get me started,’ she mumbles, ready to drop off for a nap in the sun. ‘The story doesn’t feel alive. And that’s what matters. And to be honest, I can’t judge by the author’s name. Obviously not Greek,’ she chuckles. And in the next moment breathing comes and goes with the calm rhythm of a summer siesta.

This blog was originally published as part of Peirene Press‘ series Things Syntactical. The Pain and Passion of a Small Publisher on 23 June 2015.