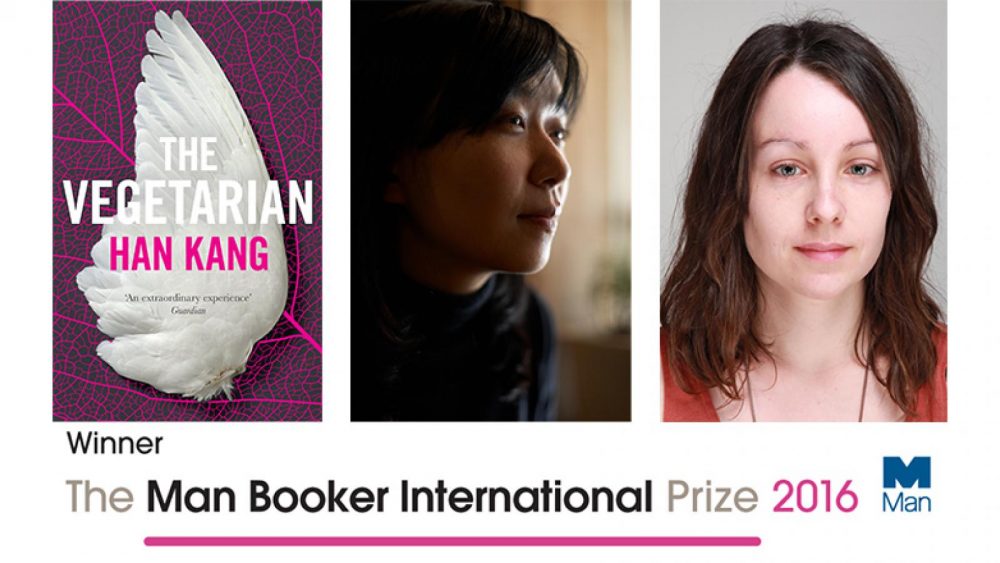 The Vegetarian by Han Kang was announced as the winner of the 2016 Man Booker International Prize. The novel was translated by Deborah Smith and is published by Portobello Books. Celebrating the finest global fiction in translation, the Man Booker International Prize awards both author and translator £25,000, along with a newly designed trophy. They have also received a further £1,000 each for being shortlisted.

Han is a South Korean author who currently teaches creative writing at the Seoul Institute of the Arts. Already very successful in South Korea, she has been awarded the Yi Sang Literary Prize, the Today’s Young Artist Award, and the Korean Literature Novel Award. The Vegetarian is her first novel to be translated into English.

The novel was translated by 28-year-old Smith, who only started learning Korean at the age of 21. Having learned no foreign languages until this age, Smith decided to become an English-Korean translator upon completing her undergraduate degree and moved to Korea to achieve this. She has since founded her own non-profit publishing house, Tilted Axis Press, which specialises in translating literature from Asia and Africa. In addition to The Vegetarian and works by Bae Suah, Smith has also translated Han’s novel Human Acts.

The Vegetarian is a three-part novel that follows the story of Yeong-hye, a dutiful Korean wife who, spurred on by a dream, decides one day to become a vegetarian. This subversive act fractures her familial life and, as Yeong-hye’s rebellion manifests in increasingly bizarre and frightening forms, turns seemingly ordinary relationships into those driven by violence, shame and desire.

Of the book, The Guardian said: “Across the three parts, we are pressed up against a society’s most inflexible structures – expectations of behaviour, the workings of institutions – and we watch them fail one by one…it’s a bracing, visceral, system-shocking addition to the Anglophone reader’s diet. It is sensual, provocative and violent, ripe with potent images, startling colours and disturbing questions.”

The novel was announced as the 2016 winner by critic and editor Boyd Tonkin at an exclusive dinner ceremony at the V & A. It was selected from 155 books by a panel of five judges, chaired by Boyd Tonkin and consisting of: anthropologist and novelist Tahmima Anam; academic David Bellos, Professor of French and Comparative Literature and Director of the Program in Translation and Intercultural Communication at Princeton University; editor and academic Daniel Medin, who holds a comparative literature professorship at the American University of Paris (AUP); and prize-winning British poet and author Ruth Padel.

“The Vegetarian by Han Kang, translated from the Korean by Deborah Smith, is an unforgettably powerful and original novel that richly deserves to win the Man Booker International Prize 2016. After our selection of a diverse and distinguished longlist, and a shortlist of six truly outstanding novels in first-rate translations, the judges unanimously chose The Vegetarian as our winner. Told in three voices, from three different perspectives, this concise, unsettling and beautifully composed story traces an ordinary woman’s rejection of all the conventions and assumptions that bind her to her home, family and society. In a style both lyrical and lacerating, it reveals the impact of this great refusal both on the heroine herself and on those around her. This compact, exquisite and disturbing book will linger long in the minds, and maybe the dreams, of its readers. Deborah Smith’s perfectly judged translation matches its uncanny blend of beauty and horror at every turn.”

This is the first year that the Man Booker International Prize has been awarded on the basis of a single book, after having joined forces with the Independent Foreign Fiction Prize last year. The £50,000 prize will be divided equally between the author and the translator. In its prior form honouring a whole body of work published either originally in English or available in translation in the English language, the prize was awarded to Ismail Kadaré in 2005, Chinua Achebe in 2007, Alice Munro in 2009, Philip Roth in 2011, Lydia Davis in 2013, and László Krasznahorkai in 2015.

The announcement follows the extraordinary research results conducted by Nielsen Book and commissioned by the Prize which demonstrate the rising popularity of translated fiction. The volume sales of translated fiction books have grown by 96% from 1.3 million copies in 2001 to 2.5 million in 2015 against a market which is falling overall (from 51.6 million to 49.7 million). Furthermore the value of sales of translated fiction have more than doubled from £8.9 million to £18.6 million between 2001 and 2015. Although translated literary fiction makes up currently only 3.5% of the literary fiction titles published in the UK, the volume of sales is at 7%.