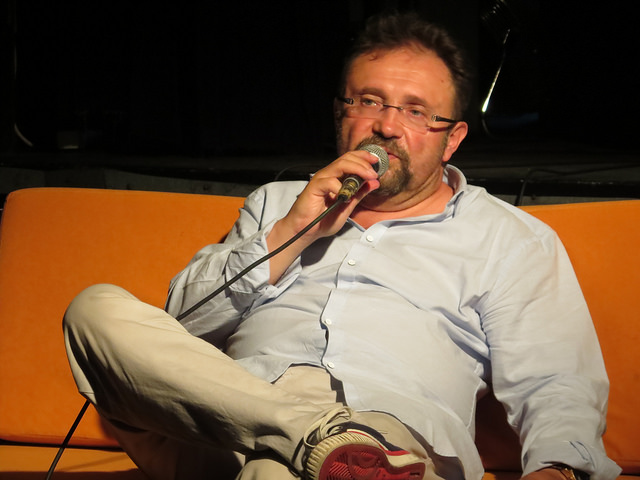 Old age came in one day, on May 23, 2010, at 11 a.m. I’d just made myself comfortable in a bamboo chair in front of a small café underneath the Observatory, just below a device used to bring closer the stars that school children watch when they visit the capital on excursion. The signs of summer were getting more obvious by the day. The legs went numb less often, the sinuses did not ache, and the digestion was improving too. Until only a couple of years ago the warmest season came with open cars, buzzing of scooters, short skirts, colors and movement, things that you could no longer have, but could still watch what comes inside from the outside, into a man. Today it arrived with what came out. For example, a rather large mucus from the nose, which, when it after a heroic struggle finally ended up in a handkerchief, brought relief to the area of a left sinus. But all of it would’ve been okay, both the observatory and the walnuts and the warmth, and even that decaffeinated watery thing I sipped because of my high blood pressure, smelling in the air the whiffs of the real Minas Coffee, if all of a sudden, somewhere in the corner of my field of vision, like a mote or unwashed gum in your eye, an elegant lady had not appeared with her light hair and a démodé but still beautiful jacket made of black cow skin. She came out through the door of the ballet school and went down Radićeva Street. But then she was still nothing, a person, a shadow on a photograph that had been accidentally captured by two long-range lenses. Only then did it begin to sharpen. In the eyes as well as in the mind. The light hair carefully cut into a bowl, a gait characteristic of a ballerina and a well-known dress. But, just as I was about to get a closer look, she fished out huge sunglasses from her purse and put them on so I could not see her eyes. Neither her eyes, nor half of her face. Was it really her? She, it seemed, was taller. And I was already springing to my feet, pushing away the marble topped table, the cup and the plate that let on a little twang, and hurrying down, along the path that led to those three or four steps to Radićeva Street. She was just in front of me, but her pace was fast. I saw her back in the black jacket and a bag thrown over her shoulder. And the hair that swayed as she walked. Casual, but compact, as if her hairs were members of a well-tuned dance ensemble. You see such hair in Taft or L’Oreal commercials. I plodded behind her down Radićeva Street, but I nevertheless felt it would be stupid to just approach her and ask: “Are you Senka? Is that the jacket I bought for you in Corfu some thirty years ago?”

My enthusiasm slowly waned. Still, I did follow her all the way to Kamenita Gates where the street descended steeply towards the Main Square, when two things occurred to me: I didn’t pay for my coffee, and I would, if I went all the way down, have to trudge all the way back up the hill. And so I stopped by the bronze St. George slaying the dragon and watched as she grew smaller and smaller, stopped by a store’s window here and there, as if postponing the inevitable, and then continued to grow smaller. I stood there until the crowds at the bottom of the street swallowed her and then I tiredly went back. This was my first defeat that morning.

The waiter met me at the street and pierced me rudely with his eyes. He didn’t say anything, he just glanced at me and went back to the terrace. Obviously, he thought I was going to run away without paying for that gunk of decaffeinated Nescafe. Did I really look like that? Like those who run away without paying? I calmly went over his insult and made myself comfortable in my rattan chair once again. People at the terrace, an older couple and two or three girls, probably from the ballet school, watched me with interest. It was obvious that the catering worker had freaked out when he saw me running after a woman who looked so much like Senka. I took the newspapers from the next table, took a sip of coffee, and leaned back in my chair enjoying the sun that was making its way through the treetops of a hundred years old walnuts that would soon outgrow the Observatory’s tower. It was still pleasant, not too hot, and the unreal faces of those whose names stood in the In memoriam column watched me from the photos because that was where the person from the next table had stopped reading.

At one point I noticed that the waiter was still glancing at me under his eye. I had already finished that decaffeinated blend and now I was just sitting and reading the café’s newspapers. I was taking up space. So, although there were plenty of free tables, the waiter probably hated me on two accounts. First, because he thought I’d wanted to run away without paying and, second, he hated me in general, by the code of his trade, because I sat in front of an empty cup. As he passed between the tables and took orders, he fixed his eyes on my table. First he looked at my face, rudely, and then at the newspapers, as if he could recognize whether they belonged to the café or whether they were mine, private, and then his eyes accusingly fell on the empty cup. However, he did not come to take it away yet. It probably wasn’t polite, yet, but it would be soon. It was clear to me, namely, that as a fresh retiree I’d get in the way at home, when the wife vacuumed the house, when the grandson arranged his toy cars in a line all over the rooms I was still paying mortgage for, when the daughter studied for those exams she had not yet passed with her hands over her ears, but that I was getting in the way in a café, that was on this sunny morning, when I was thinking about Senka, something completely new.

And there he was, he ran up to my table, picked the cup and the plates with loud clings, swiped the table a couple of times with a small rag, as if I had spilled something, and I hadn’t, and said: “Twelve kunas.”

At that he aggressively examined the table, as if to see whether I somehow nevertheless managed to soil the smooth surface of the fake reddish marble, and then he circled the terrace with his eyes like those security cameras in stores that watch who stole and who would be stolen from as they spend they hard earned money on whatever it is they want to buy. He clearly made his guests know that they were suspicious, and he didn’t even look at me as I took fifteen kunas out my wallet and put them in his hand. And only after he put away the money it became clear that he was not checking who else could run away, he knew well who was sitting where, but that he was avoiding eye contact so that he wouldn’t have to give me the change of those three kunas back. This way he could say he got lost in thought for a second. He mumbled something like “Thank you” and turned his ass on me. Well, Senka definitely did not deserve such a jackass on this sunny morning of a day that would belong only to her. Partly because of that long gone emotion that had who knows why woken up on this morning, and partly because it no longer had anyone else to belong to. Those at home were too much there to dedicate a day to them, even if in my thoughts. This left only Senka and the way she walked down the street. And so this spring morning and those few swift steps of hers and her youthfully cut hair that revealed her neck somehow neutralized the fact that she, well, shrunk. We were all shrinking, without a doubt, all of us from the 4C Class of the former XVI High School, all of us born in one war and for the good part retired in the next one because our firms had bought off the rest of our working years. Just to get rid of us. So in my mind I told to this jackass: “No way!”

Zoran Ferić was born in 1961 in Zagreb. He is among the most widely read contemporary Croatian writers. His books have been awarded in Croatia and translated into English, German, Polish, Slovenian, Spanish and Hungarian. The novel Kalendar Maja (“Maya Calendar”) has received three awards in 2012 – the Jutarnji List Award for the best work of prose fiction, the Vladimir Nazor Award and the Zagreb City Award. The German translation of the novel (Folio Verlag, Vienna) got a great reception among literary critics in Austria and Germany.