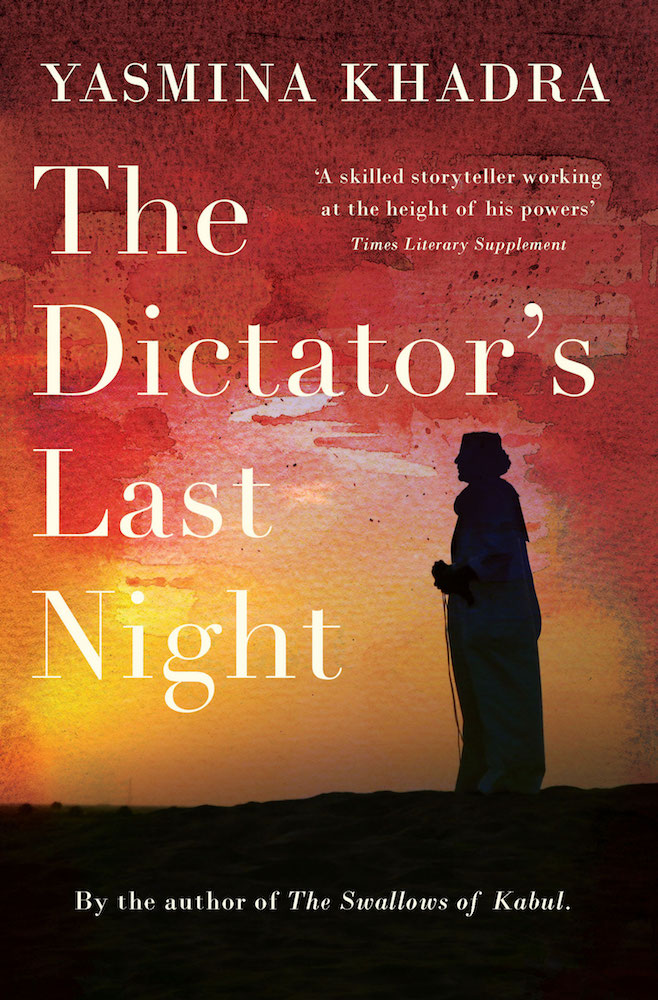 Yasmina Khadra’s imagining of the final hours of Colonel Gaddafi, The Dictator’s Last Night, was released globally last month by Gallic Books. Khadra offers a unique panorama of a man whose life and death continue to have repercussions in Libya and the surrounding region today. This is a very intimate portrait of what could have gone through Gaddafi’s mind as his 42-year rule collapsed before his very eyes.

In an interview with his French publisher, Editions Robert Laffont, Yasmina Khadra talks about the man, the character and what inspired him to write this novel.

ERL: You write in the voice of Muammar Gaddafi. Why did you choose him?

YK: Everyone knows Gaddafi’s excesses, but what do we know of the man himself? I wanted to delve more deeply into his personality. To me, Gaddafi is like a character from a book – Homerian or perhaps Rabelaisian. He’s phenomenally complex and inscrutable. As generous as he is cruel, he’s a pathologically anxious figure in whom doubts and convictions exist side-by-side.

Gaddafi lived by his own frightening belief system. Born of anger, he died amid the anger of others. His story is unnerving and filled with contradictions. It teaches us how fickle public favour can be, reveals the sham of nationalist sentiment and discourse, and exposes the fatal naivety of Messianism. Gaddafi has become emblematic of so many harsh truths, and in the end he fell into a trap of his own making, by believing himself invested with a divine mission.

Throughout the writing of this novel, I was in a kind of trance. At times, I was no longer myself, but Gaddafi in person, wracked with fear and uncertainty. I felt I was living through the last hours of the ‘Brotherly Leader’, body and soul. I could distinctly smell the stench of his sweat and of Sirte burning; hear his screams and the sound of bombs dropping, and I felt myself shaken with his blasts of fury and terror. I have never experienced anything as intense while working on any other novel. Gaddafi is like a Shakespearean character to me, like Verdi’s Aida. Tackling his story was a monumental undertaking, and I hope I’ve pulled it off. But that’s for the reader to decide.

ERL: What research did you do for this book?

YK: Gaddafi has long been a feature of the Pan-Arab debate. His name was coming up in conversation all the time. He ruled for long enough to have had an effect on several generations.

I found myself struck by him. His approach seemed muddled: sometimes revolutionary, sometimes suicidal. I wondered how he would meet his end, which I suspected was bound to be as spectacular as his military parades.

I had heard a few stories about his personal life from a senior Libyan official I met on a course in Moscow in the 1980s. I knew about his romantic disappointments, the difficulties he faced growing up in poverty, the wounds that made him defiant and caused him to seek revenge, sometimes through the courts.

Gaddafi is unlike Saddam Hussein, Ferdinand Marcos, Idi Amin or any other dictator. He’s a different kind of tyrant: occasionally visionary, but most often blind to the truth, telling himself he’s doing the right thing while committing one wrong after another. He had a tribal idea of sovereignty in which birth right, held sacred by the Bedouin people, excused all manner of mistakes and misuse of power.

gaddafiThe way in which he exercised his authority reveals the absurdity of the relationship Arab peoples have with their leaders. In a sense, Gaddafi was the expiatory victim of his own trust in the engagement of the masses, which was phoney, since they had no choice in the matter, a deceptive façade, whose shortcomings were revealed for all to see when Gaddafi was publicly, appallingly, lynched. Gaddafi stands above all as proof that Arab nations prefer reliance to emancipation, flag-waving to reason, a good rant to democracy.

There are many questions to answer before a sufficient level of maturity is reached to allow our peoples to become modern and inventive nations.

ERL: Did you ever meet Gaddafi?

YK: I met him only once, on one of his state visits to Algeria. It goes without saying this was in a purely official capacity. I was part of the welcoming committee sent to greet him at Oran airport.

He had a firm handshake. He barely glanced at me. The encounter lasted no more than four or five seconds. Long enough in any case to know for certain that the character who tells his story in my novel really and truly existed.

The Dictator’s Last Night was published on 19 October 2015.

We publish this interview by courtesy of Gallic Books.