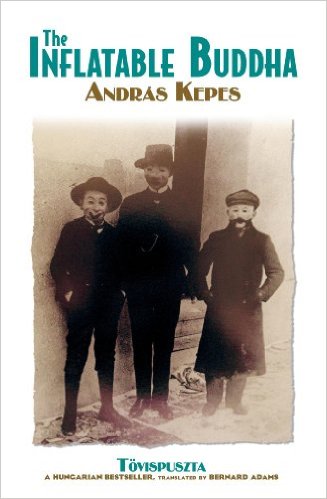 With the fall of the Berlin Wall writers and journalists from Eastern Europe were finally given the chance to explore their historical past in detail. A past that had either been a foreign land or forbidden territory to most of them. A past that had been perceived opaquely through a dominant ideology that many disagreed with. In Hungary the past is especially complicated and treacherous. Imperial poor relation, an early transformation as short-lived communist state under Bela Kun, the stagnant years under the crushing, if stable, regency of the still controversial Admiral Miklos Horthy, to the complete barbarism of the Arrow Cross Party (the Hungarian National Socialists) followed by the establishment of a communist republic in 1948 and the tragedy of 1956, through to the steady, if turgid, ‘goulash communism’ of Janos Kadar. It is a diverse past that the Hungarians endlessly worry about.

Enter Andras Kepes – the Melvyn Bragg or Andrew Marr of Hungarian Television – and his novel The Inflatable Buddha. Published as ‘Tovispuszta’ in Hungarian, it means ‘hamlet of thorns’ and refers to the village where the three main characters grow up. It also refers to the first scene in the book when the father of one of the boys places a crown of thorns on the head of the statue of Christ at the entry to the village. The English title is a reference to a gift from a grateful patient to the local dentist – a bright orange inflatable buddha. The dentist is the brother of one of the main characters and explains that, This is particularly practical … it´s faith, wisdom and foreigners all in one. True the inside is empty, like life, and it´s easily portable.

In an introductory paragraph to the novel, Kepes writes that he has written this account from a series of old documents and with the smell of old objects: a silver spoon with a family crest, a Hanukkah candlestick, a chest painted with tulips, a picture of Christ and the inflatable Buddha. Each object heads a chapter in his novel. Through everyday objects he tells the story of Hungary. Objects that can be brought in any flea market or small antique shop but which together form a narrative whole.

The dentist unwittingly sums up Kepes´s novel. It is indeed full of wisdom and history, faiths and foreigners, but ultimately it feels empty, as though he is too set on going through the motions of writing the great book about Hungary in the 20th century. At times it feels too portentous and staged. It reminds me of many other ‘great’ books written about Hungary with an obvious cast of characters – the aristocrat, the peasant and the Jew. The British book cover is a wonderfully amusing photograph of three small boys in their Sunday best wearing masks and hats from the 1920s. Sadly the actual characters never live up to that promise.

‘Pal’ is the son of Baron Pal Szentagostony and very much the aristocrat trying to move away from the stifling life that his parents have led. Istvan Veres is the son of a peasant a formidable football player and a concert standard violinist. David Goldstein is Jewish and comes from a close-knit religious family. Smart, he cannot go to university due to the anti-semitic laws passed by Horthy that eventually closed all roads to higher education for the Jews. He ends up working in his uncle’s garage. The book follows all three men from their adolescence to post-1989 Hungary through all the various detours and crises that the country underwent.

In the stultifying atmosphere of his chateau full of chandeliers, monogrammed family silver and fine porcelain, the Baron already feels that the world in the late 1920s has changed for the worse. He cannot believe that his son is the friend of the sons of peasants and Jews. After Oxford, Pal goes to Paris and lives la vie boheme. He hangs around with artists and falls in love with a Hungarian ballet dancer, much to the consternation of his parents. Istvan is taken up by a prominent lawyer and moves up socially when he marries the lawyer´s daughter. The lawyer and his family are anti-semitic as well as early members of the Hungarian fascist Arrow Cross party.  David is also fighting the restrictions of his birth. First by tasting salami and asking if he is still actually Jewish. He mixes with young communists in Budapest and eventually changes his surname to ‘Pusztai’ – in homage to his native village of Tovispuszta and to hide his Jewish origins.

All three men survive the war and then in many ways the story really begins. The romance of the earlier period fades into the harsh reality of the Soviet times – a time much closer to the author’s own experiences. David spent the war years in hiding and, unlike most of his family, survived. He finally goes to university and is so shocked by the violence unleashed by the events of 1956 that he escapes the country with his young family. He becomes an American success story. After having been crippled by the Arrow Cross, Istvan ends up working for the AVH, the Hungarian political police. With a failed marriage behind him he can only look on in wonder at the change in Hungarian society; he is badly beaten up again in Bem Square in 1956. He becomes lost in the political morass that is Hungary. Pal has ‘a good war’ fighting for a free Hungary from London. He goes back to Budapest having married David’s adopted sister and spends the rest of his life in and out of prison as a political reactionary or prophet. His integrity is intact but his life is a complicated mess.

What emerges is that all three men from the Hamlet of Thorns are lost and unable to hold on to the certainties of their early life. Like the crown of thorns on Christ’s head they are scattered to the four winds. The defined roles they played in their tiny hamlet have been exploded and now they are left rudderless to cope with the confusion. The aristocrat’s family die on a peasant small holding alongside the peasants they so looked down on and the Jews were murdered in the Holocaust or by the Arrow Cross. Their lives are as fractured and useless as Istvan’s broken limbs – no longer able to play the violin or kick a football. Empty like the inflatable Buddha.

It is an engaging read, and well translated by Bernard Adams, yet it is almost impossible to work out where this book stands in Hungarian literature. It lacks the poetry and immediacy of Gyorgy Konrad‘s marvellously evocative memoir A Guest In My Own Country, or the high camp of Michael Korda. It is a strange literary hybrid. It relies on a very definite set of characters that we have witnessed before in films like ‘Music Box’ or novels like The Invisible Bridge by Julie Orringer that also has Hungarians in Paris in the 1930s falling in love with ballet dancers and then returning to an occupied country. Both novels end with the children of the 1956 exiled Hungarians returning to a mythic country that they only know through their parents’ stories. It feels familiar to them and they end up falling in love with it. Possibly because for them it is indeed like a list of objects bought in an antique shop as opposed to a reality lived and suffered.