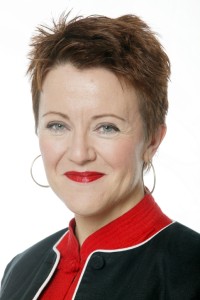 German Humour: Are you joking? by Rosie Goldsmith

German humour – are you joking?! We definitely need some humour at this unhappy time in the UK’s European revolution, but surely not German humour?

When I was asked by the German Department at Oxford University to hold the keynote address at the awards ceremony for the ‘Oxford German Network’ I felt honoured. The prize-winning ‘German Olympiad’ students had been asked to write essays on ‘Deutscher Humor: Nichts zum lachen?’ – so I agreed to tackle the same topic. I’m a journalist, I speak German, I love Germany, but this was my toughest assignment yet.

Germany is officially the least funny country in the world. 30,000 people in fifteen countries were asked to rank nations with the worst sense of humour and Germany came out on top.

I lived in Germany in the 1980s as a student and then as a journalist. I decided that the only way to survive as a fun-loving Briton was to immerse myself in German humour and seek it out wherever it might be hiding. My conclusion after a decade was this: ofcourse Germans have a sense of humour – but it’s not always very funny. I eventually had to leave Germany because my laughter muscles were wasting away and my frown lines deepening. Everyday life was just too serious.

It had all started so well. The 1980s in Germany was a golden era of wit and satire. I began by watching the late night satirical talk shows on German TV – like the brilliant Harald Schmidt – and the political Kabarett programmes such as Scheibenwischer – Windscreenwiper.

Each time I visited a German city I went to one of the famous Live Kabarett shows. They had names like ‘The Thistle’ and ‘The Pepper Mill’ and ‘The Laugh and Shoot Society’ – shooting down political and social taboos. They were so funny, astute and daring.

I lived for that whole decade in the city of Cologne, home of Kölner Karneval. Every day, every Kölner kept telling me that Cologne was the funniest city in Germany. I got myself a boyfriend from Cologne: surely there was no stopping me now? I tried so hard! My German got better and better and I thought ‘HOORAY, now I’m fluent! Now I will automatically start to LOVE German humour’.

The problem was that Cologne was only funny once a year – during Karneval. However many times I took part in the annual Karneval – dressing up in clown costumes and making sure I drank enough Apfelkorn and Asbach Uralt to appreciate it – I still didn’t get the humour.

So what is German humour? Even Google and Wikipedia struggle for a good definition.

Here is the utterly humourless, incomprehensible Wikipedia definition – obviously written by a German:
German humour refers collectively to the conventions of comedy and its cultural meaning within the country of Germany. Comedy is a staple of German culture, with many Germans making light of situations in social conversation, and with a large amount of time allotted to comedy in German television.

Pardon me?! Ich bitte Sie! Here’s MY definition: German humour differs from region to region; Germany has a longstanding satirical tradition starting with Goethe, Schiller, Ludwig Tieck and their mates; it has some clever but serious satirical magazines; there’s a lot of slapstick; they love puns and ambiguity.

Take this East German joke:
“The train announcer at the main station has been imprisoned!”
“Why?”
“Because he shouted out ‘ Zurücktreten, bitte!’ when Erich Honecker’s train arrived!”
It’s not very funny but in German zurücktreten, bitte! means both please step back! and please resign! It’s all about political and cultural context.

Like the rest of us, Germans also make painful, embarrassing jokes about stereotypes, dialect, regional and ethnic differences, such as the ‘lederhosen-ed Bavarians’, ‘blonde buxom beer-maids’ and ‘stupid East Frisians’:
How many Frisians does it take to screw in a light bulb? Five! One to hold the bulb and four to turn the table he’s standing on.

Germans do have some ‘stand-up’ comedians (a British speciality), but not many. Most of them are actually sitting down behind desks on talk shows, where they rely heavily on sarcasm and deadweight punchlines. German humour is often painfully literal – as are they – which does not help. But there were some outstanding comedy archetypes, such as Loriot, Heinz Erhardt, Karl Valentin and Otto Waalkes.

I fell in love with ‘Loriot’ when I arrived in Germany, aka Bernhard-Victor Christoph-Carl von Bülow, born 1923, died 2011. Loriot was Germany’s most famous comedian; an intellectual, a cartoonist, a master of observation comedy, comic timing and the TV sketch. A number of his catch-phrases are today part of the German language, like “yodel diploma”, “stone louse”(‘Petrophaga lorioti’), and “There used to be more tinsel”, “Look, a piano! A piano, a piano!” and the untranslatable “Ach!” In fact none of Loriot’s humour is really translatable. But watch him on YouTube. My favourite sketch involves a piece of spaghetti. No words necessary.

Refined wordplay and high-brow observation – definitely more British than German. Is this actually the point? Germans I discovered loved British humour too – on TV especially, often in the original, sometimes even dubbing it.

I started sharing a flat in Cologne with a German friend and became subjected to the annual ritual of Dinner for One, or The 90th Birthday. This is a very boring British TV comedy sketch starring Freddie Frinton and May Warden. It was recorded in English for German TV in 1963. It is – believe it or not – the most frequently repeated German TV programme, ever. My flatmate split her sides every single time. We also watched The Dave Allen show – another of Germany’s most popular TV shows. The Whisky-drinking Irishman sits on a stool smoking and talking and telling stories. And we watched Fawlty Towers. In English.

I was discovering the best of British humour – in Germany!

The British Sitcom ‘Allo ‘Allo – my Dad’s favourite – also popped up on German TV dubbed into German. Set in France under the Nazi occupation, it poked fun at the Gestapo, French Resistance and the British. Lieutenant Gruber and the Nazis were portrayed as bumbling buffoons; their attempt to find a lost painting called ‘The Fallen Madonna With The Big Boobies’ was a running joke. This was daring, radical stuff for Germany. After many dark decades the Germans were finally making fun of themselves.

You can only make fun of the Third Reich and Adolf Hitler in Germany – or anywhere – if you parody them. One German TV sketch show also does it well – Obersalzberg, portraying Hitler and the Nazis as incompetent, lazy and confused bureaucrats.  Then there is the recent bestselling book and film Er Ist Wieder Da – Look Who’s Back. It is a very funny, very clever, transgressive satire about a 21st century Adolf Hitler by the writer Timur Vermes.

And who can fail to laugh at the thousands of satirical remixes and re-subtitled bunker scenes from the film Downfall – Untergang – in which a ranting Hitler, played by Bruno Ganz, rages against everything from being barred from his Xbox account to the relegation of Sheffield United Football.

At the end of the 1980s, just as I was running out of things to laugh at in West Germany the Berlin Wall fell – and we were given ‘the gift’ of East German humour. It was desperately bad but it kept me hooked for a while. It was essential ‘escape-valve humour’ for the Ossis and a novelty for us Wessis, based on harmless criticism of the East German regime, and targeting political figures like Erich Honecker, or the Stasi secret police, economic scarcity  and the Trabant car. Here are three of my favourites:

A citizen orders a Trabant car. The salesman tells him to come back to pick it up in nine years. The customer asks: “Shall I come back in the morning or in the evening then?” / “You’re joking, aren’t you?” / “No, not at all. It’s just that I need to know whether the plumber can come at 3pm or not.”

Why do the Stasi work together in groups of three?/ You need one who can read, one who can write, and a third to keep an eye on the two intellectuals.

Finally, after nearly a decade of tireless personal and professional investigation, I gave up. Exhausted in the pursuit of German humour I returned to the UK. I hadn’t cracked it. I could speak fluent German, I could even make jokes in German and understand German satire BUT it wasn’t a funny enough country and culture for me to feel comfortable. Easing myself back into English humour was like being cuddled in a cloud – but often what makes me and many of us in the UK laugh, ironically, is humour about Germany.

Last month I met one of my favourite comedians of all time at the Hay-on-Wye Festival of arts and literature in Wales. The glorious Michael Palin told us the story of how he and his fellow Pythons made two episodes of Monty Python’s Fliegender Zirkus in German in 1972. They created several new sketches, like the ‘Silly Olympics’, ‘Anita Ekberg Sings Albrecht Dürer’ and ‘The Merchant of Venice’ performed by a herd of cows. They were shot mostly on location in Bavaria. The first episode was recorded in German and the second in English and dubbed into German. Since none of the Pythons spoke German, they were given phonetic transcripts of the sketches, which they learned by heart. As a result, forty-five years later Michael Palin is still able to sing ‘The Lumberjack Song’ in German. We roared with laughter.

So thanks to meeting Michael Palin and thanks to being given my toughest job assignment ever by Oxford University I have made my peace with German humour. I have just watched The Funniest Joke in the World on YouTube. This is the title of a Monty Python sketch set in Germany about a ‘killer joke’.  The joke is so funny that if you hear it you will die laughing.  It is, ofcourse, absolute nonsense:
“Wenn ist das Nunstück git und Slotermeyer?
Ja! Beiherhund das Oder die Flipperwaldt gersput!”
Or translated into Pythonesque English:
“My dog has no nose.”
“How does he smell?”
“Terrible.”

This blog was originally published on ELit Literature House Europe website on 15 July 2016.