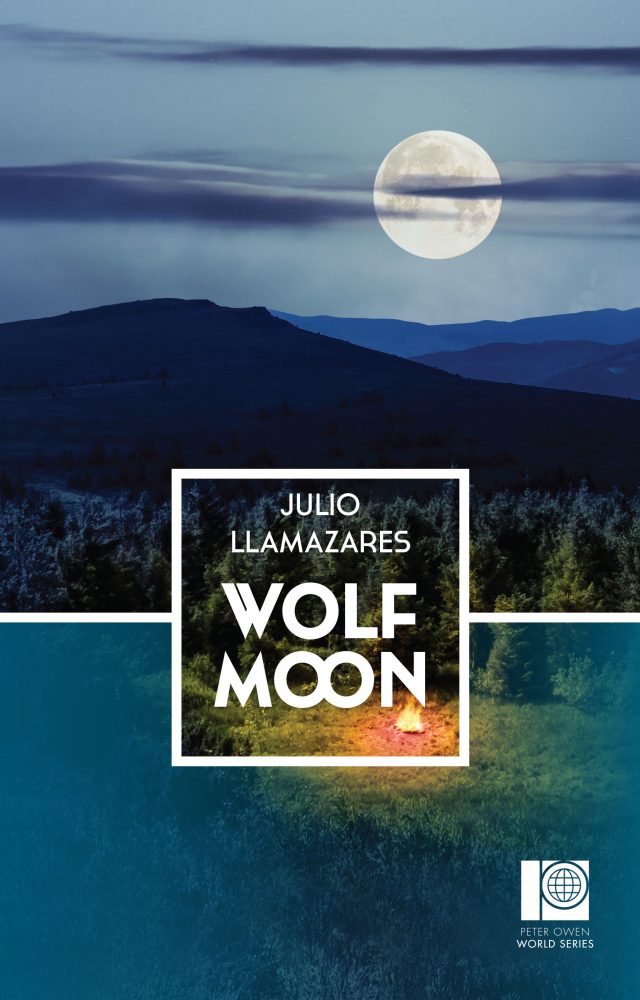 From WOLF MOON by Julio Llamazares, translated by Kathryn Phillips-Miles and Simon Deefholts

We walk across the mountains for two long nights without stopping to rest, in search of the home we left a year ago.

We sleep by day, hidden in the undergrowth, and when night falls, when the shadows begin to stretch out across the sky, we start off again, hungry and tired.

Behind us, asleep in the depths of the moonlit valleys, we leave behind villages and hamlets, sheepfolds and farmhouses, barely discernible lights, fainting away in the night, on old river courses or under the desolate, vertical shelter of the mountains.

Until, little by little, the sky and the paths and the forests become familiar. Until, at last, having finally crossed the black peaks of Mount Morana, the distant rooftops of La Llánava appear before us, beneath the October night studded with stars and blueberry bushes, at the start of the wide valley streaked with poplar groves, carved out by the River Susarón at the foot of Mount Illarga.

‘Look over there, Ángel. Beside the mill.’ Ramiro crawls through the heather to hand me the binoculars. My eyes are instantly flecked with greens and yellows: water meadows next to the river, rows of elms, smoke rising lazily from the chimneys on the old rooftops of La Llánava. In a flood of bundled images – cows and winding paths, bridges, towers, backyards and alleyways, figures already stooping over in their vegetable plots – the familiar sights that I have never forgotten come flooding back to me from afar through the binoculars.

‘On the path,’ says Ramiro, pointing impatiently. ‘By the dam. Can’t you see her?’

Between the hedgerows that border the road to the mill, against the languid early-morning mist, I finally spot a patch of yellow. A scarf.

‘Yes, it’s Juana. She must be taking the cows out to the pasture at Las Llamas.’

Now I can see her, clear as crystal. She is walking slowly alongside the mill race carrying a cattle-goad, with her yellow scarf snatching at the morning light. I remember that scarf. I bought it for her myself, out of my first pay packet, so she could wear it when she came back from the threshing floor on the cart loaded with straw and lazy sunshine.

Ramiro scans the whole valley again through the binoculars. ‘It’s too risky,’ he says. ‘Someone might see you from down below.’

‘Not if I’m careful and stay in the undergrowth. I’ll speak to Juana so they can get ready, and tonight all four of us will go down.’

I take off my cape, and Gildo hides it in the heather.

‘Leave the submachine-gun here,’ says Ramiro, passing me his handgun. ‘It’ll be easier with this.’

The three of them watch me leave in silence, anxious that someone might spot me. The area is occupied, full of soldiers, and our lives are now totally dependent upon how successful we are at not being seen.

Juana has turned around, startled, on the other side of the hedgerow where she had been sitting.

She jumps up and, without turning around again, begins to retrace her steps very slowly towards the middle of the field where the cows are grazing, bored and indifferent.

‘Juana, Juana! Don’t be scared, Juana. It’s me, Ángel.’ My voice is nothing more than a whisper among the brambles, but Juana hears me and stops suddenly, as if struck by a bullet.

Her blue eyes are wide open like two round coins, startled, incredulous, staring into mine.

‘Sit down. Sit down where you were. With your back to me, like you were before. And look over at the cows.’

She does as I say and sits down again on the other side of the hedge­row, barely half a metre from where I’m lying flat on the ground, waiting for her. If I wanted to, I could almost reach out and touch her.

‘We’re fine,’ she replies in a low voice. ‘We thought we’d never see you again.’

‘Did you come on your own?’

‘No. I’m with Ramiro and his brother and Gildo from Candamo. You know who I mean; he got married to Lina. They are waiting up on the hillside.’ My sister listens without turning her head, anxiously scratching at the ground with her goad. ‘Listen, Juana. Tell Father that we’ll come down into La Llánava tonight. Tell him to meet us in the hayloft. Make us something to eat. And if you can, go and see Ramiro’s mother. We need to find somewhere to hide for a few days.’

In the distance, along the path by the river, some cows begin to low.

As I leave her, crawling through the heather like a mangy dog, her words still echo in my ears.

Julio Llamazares (b. 1955) is a Spanish author poet, novelist, essayist and journalist. His work often deals with the collective memory of Spanish society and, in particular, the progressive decline of rural cultural heritage. He has published six novels together with several books of poems, essays and travel writing.