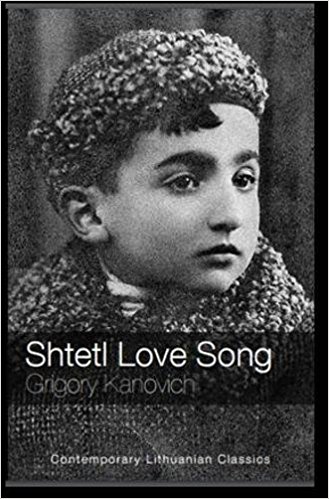 A shtetl is an Eastern European Jewish township, one of which – Jonava – Grigory Kanovich grew up in during the interwar years. Written in 2012, and now available in English, Shtetl Love Song is his affectionate, gentle and absorbing chronicle of the traditions, relationships, workplaces and landscapes of the Litvaks – the Jews of the Lithuania – whose culture was annihilated by the Nazis and their local collaborators during the Holocaust.

‘The Attack on the Ferry’

At the end of the second day of our retreat we saw the sparkling of a river. From a distance Pinkhas caught sight of a rope extended over the water and a small pine-board ferryboat with a signal bell. The boat was protected by a small iron canopy resembling a boletus mushroom.

From the crumbling slope of the bank, a deserted forest path, covered with wind-fallen branches which protected it from rain, led to the ferry landing.

There was no ferryman in sight.

Our cart descended the slope.

‘Hey, is anybody here?’ our driver shouted.

The sound echoed in the silence. ‘Hey!’

Out of the bushes crawled a sleepy beanpole of a man with rumpled red hair.

‘What are you hollering for?’ he asked, yawning broadly.

‘Are you the ferryman?’ Pinkhas asked, while the peasant yawned.

‘Will you take us over to the other bank?’

‘I will if you pay,’ the ferryman said, thick with drowsiness. ‘Just hand over the gold.’

‘Where are we supposed to get that from?’

‘Jews without gold are not Jews.’ The beanpole covered his mouth with his hand and, pulling up his trousers, headed back to the bushes.

‘Wait!’ shouted Velvl the cobbler, taking the ring off his finger.

‘On one condition; you give me the ring before we go over!’

The cart rolled onto the ferry. The beanpole put the ring into the pocket of his creased trousers, pulled the signal bell and, with some creaking, the ferry moved off.

As the ferryman was navigating the rapids, a German fighter plane appeared overhead.

Before he had time to look away, the air was filled with bullets.

The plane descended, then ascended.

It seemed as if the pilot was playing a diabolical game with us, aiming not at the people or the horse, but at the rope extended across the river, trying to break it, as if to take pleasure in how the ferry, caught by the current, would be carried away down river. Even as his bullets struck the wooden bottom and the sides of the ferry and the water around it, the German did not stop.

Huddling against the warm bodies of our parents, Mendel and I were afraid to move. Peasants, who were loading their fragrant, dry hay into carts on the other bank, threw down their pitchforks and stared helplessly at the cloudless sky that rained down death.

Finally the pilot succeeded; the loose ferry was carried swiftly by the current and crashed against the opposite bank. The barefoot ferryman lay unmoving in his rolled-up trousers beneath the now-silent bell. A thin stream of blood trickled down his unshaven chin. Pinkhas was squatting before his dead horse, caressing the hair of its mane, which fluttered like the broken strings of a musical instrument.

Recovering from their fright, the peasants ran down the slope to the water, crossing themselves at the sight of the dead man and, without uttering a single word, rushed off to the village. They returned some time later with shovels to bury Pinkhas’s mare in the warm earth. They removed her collar and traces. They would have removed the bridle too, but Pinkhas had tossed it over his own neck before they returned.

‘Perhaps we should take care of him first?’ said my mother, pointing at the ferryman lying nearby while trying to avoid looking at his body.

‘We’ll bury Jonas; he won’t be going anywhere,’ a frail peasant with a bandaged cheek muttered. ‘We’ll bury him when the straw’s gathered. It’s easier to bury a horse than a man; you don’t need to read a burial service for a horse or mourn it. You just take a shovel, dig a pit, cover it over and that’s that.’

With the bridle around his neck, Pinkhas stood at the edge of the large grave and began almost inaudibly, to the sound of falling clay, to recite the kaddish, the memorial prayer.

‘What is he doing?’ asked the pious Esther, wife of the cobbler Selkiner, appalled. ‘God doesn’t allow us to recite kaddish for animals.’

‘Who said I’m reciting kaddish for a horse, Esther? Who said that? Aren’t we all animals? Animals, animals… Domestic, wild, all kinds?’ Pinkhas exclaimed and then said nothing more.

Grigory Kanovich was born into a traditional Jewish family in the Lithuanian town of Jonava and is one of the most prominent modern Lithuanian Jewish writers. He has written more than ten novels  dealing with the vicissitudes of the history of Eastern European Jewry from the nineteenth century to the present day. He is a winner of the Lithuanian National Prize for Culture and Arts.

Yisrael Elliot Cohen taught Russian literature and humanities at the University of Illinois before settling in Israel and working as a translator from Russian into English and as an English-language editor. Currently at Yad Vashem, he is working on The Untold Stories: Holocaust Murder Sites in the Soviet Union.