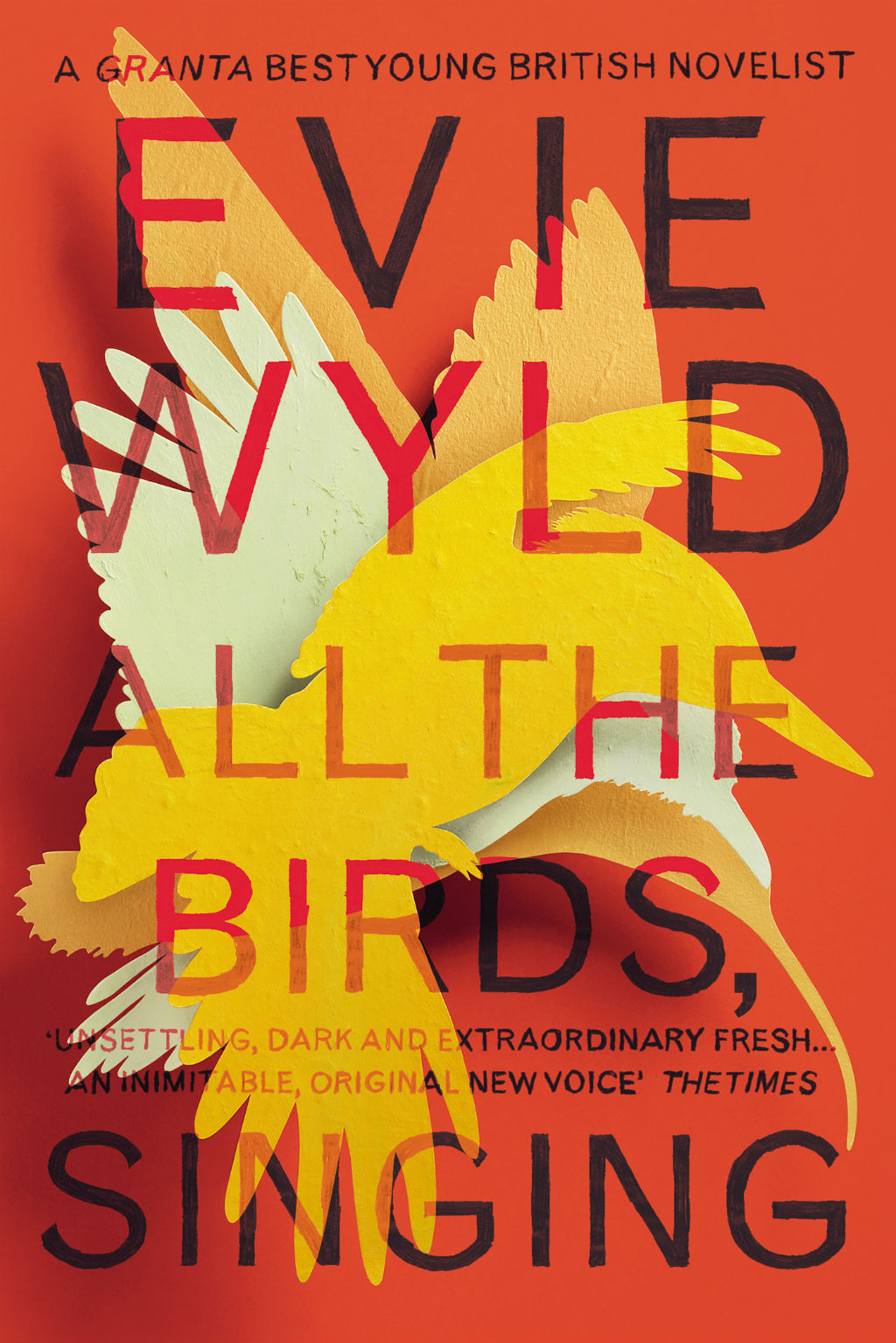 From ‘All the Birds, Singing’
by Evie Wyld

Another sheep, mangled and bled out, her innards not yet crusting and the vapours rising from her like a steamed pudding. Crows, their beaks shining, strutting and rasping, and when I waved my stick they flew to the trees and watched, flaring out their wings, singing, if you could call it that. I shoved my boot in Dog’s face to stop him from taking a string of her away with him as a souvenir, and he kept close by my side as I wheeled the carcass out of the field and down into the woolshed.

I’d been up that morning, before the light came through, out there, talking to myself, telling the dog about the things that needed doing as the blackbirds in the hawthorn started up. Like a mad woman, listening to her own voice, the wind shoving it back down my throat and hooting over my open mouth like it had done every morning since I moved to the island. With the trees rattling in the copse and the sheep blaring out behind me, the same trees, the same wind and sheep.

That made two deaths in a month. The rain started to come down, and a sudden gust of wind flung sheep shit at the back of my neck so it stung. I pulled up my collar and shielded my eyes with my hand.

‘What are you laughing at?’ I shouted at the crows and lobbed a stone at them. I wiped my eyes with the back of my hand and breathed in and out heavily to get rid of the blood smell. The crows were silent. When I turned to look, five of them sat in a row on the same branch, eyeing me but not speaking. The wind blew my hair in my eyes.

The farm shop at Marling had a warped and faded sign at the foot of its gate that read Free Baby Guinea Pigs. There was never any trace of the free guinea pigs and I had passed the point of being able to ask. The pale daughter of the owner was there, doing a crossword. She looked up at me, then looked back down like she was embarrassed.

‘Hi,’ I said. She blushed but gave me the smallest of acknowledgements. She wore a thick green tracksuit and her hair was in a ponytail. Around her eyes was the faint redness that came after a night of crying or drinking.

Normally the potatoes from that place were good, but they all gave a little bit when I picked them up. I put them back down and moved over to tomatoes, but they weren’t any good either. I looked up out the window to where the farm’s greenhouse stood and saw the glass was all broken.

‘Hey,’ I said to the girl, who when I turned around was already looking at me, sucking the end of her pencil. ‘What happened to your greenhouse?’

‘The wind,’ she said, taking her pencil to the side of her mouth just for a moment. ‘Dad said to say the wind blew it in.’

I could see the glass scattered outside where normally they kept pots of ugly pink cyclamen with a sign that said, The Jewel for your Winter Garden. Just black earth and glass now.

‘Things always get mad on New Year’s Eve,’ said the girl in an older voice that surprised both of us. She blushed deeper and turned her eyes back to her crossword. In the greenhouse, the man who normally ran the shop sat with his head in his hands.

I took some oranges and leeks and lemons to the counter. I didn’t need anything, the trip was more about the drive than the supplies. The girl dropped her pencil out of her mouth and started to count oranges, but wasn’t sure of herself and started again a few times over. There was a smell of alcohol about her, masked by too much perfume. A hangover then. I imagined an argument with her father. I looked up at the greenhouse again, the man in it still with his head in his hands, the wind blowing through.

‘Are there nine there?’ she asked, and even though I hadn’t counted as I put them in the basket I said yes. She tapped things into the till.

‘Must be hard to lose the greenhouse,’ I said, noticing a small blue bruise at the girl’s temple. She didn’t look up.

‘It’s not so bad. We should have had an order over from the mainland, but the ferry’s not going today.’

‘The ferry’s not going?’

‘Weather’s too bad,’ she said, again in that old voice that embarrassed us both.

‘I’ve never known that to happen.’

‘It happens,’ she said, putting my oranges in one bag and the rest in another. ‘They built the new boats too big so they aren’t safe in bad weather.’

‘Do you know what the forecast is?’

The girl glanced up at me quickly and lowered her eyes again.

‘No. Four pounds twenty please.’ She slowly counted out my money. It took two goes to get the change right. I wondered what new thing she’d heard about me. It was time to leave, but I didn’t move.

‘So what’s with the free guinea pigs?’

Evie Wyld was one of 4 EUPL winners who were guests of the first Euro Stars event on 17 April 2015 in Europe House in London.

Evie Wyld’s ‘All the Birds, Singing’ has been published by Vintage Books.

Thank you to the European Union Prize for Literature and Vintage Books for allowing us to republish this excerpt.