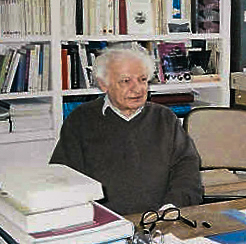 Yves Bonnefoy (1923-2016), regarded as France’s greatest poet of the last fifty years, was the author of many volumes of poetry and poetic prose, and numerous books of essays on literature and art, including studies of Baudelaire, Rimbaud, Goya and Giacometti. Between 1981 and 2016 he was Professor (and then Emeritus Professor) of Comparative Poetics at the Collège de France, a position he inherited from Roland Barthes. His work has been translated into scores of languages and he himself was a master translator of Shakespeare, Yeats, Keats, Leopardi, Seferis and others. He received a wide variety of literary prizes.