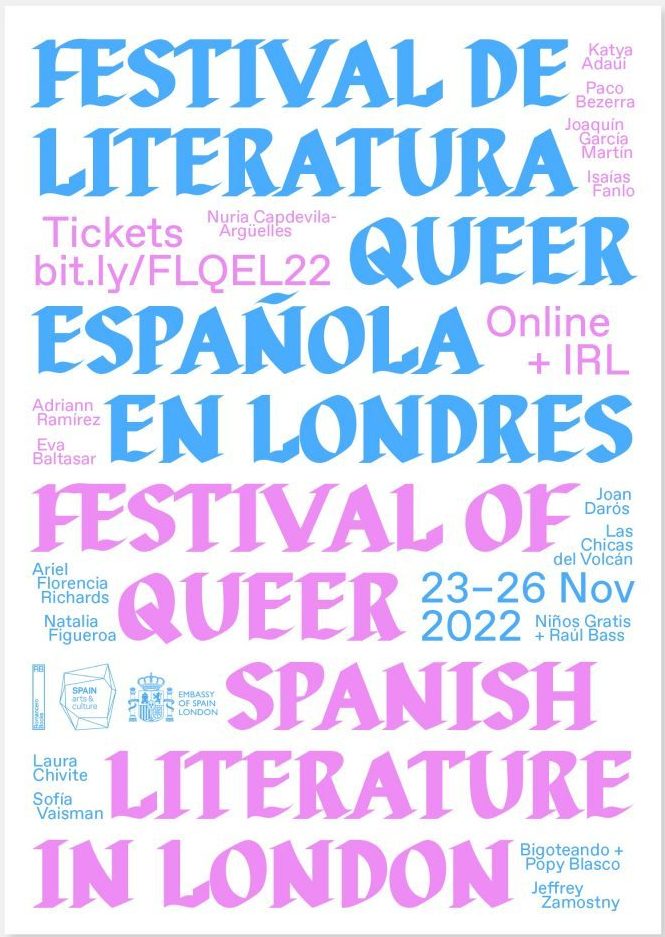 Festival organised by Romancero Books’ bookshop with the support of the Office for Cultural and Scientific Affairs of the Spanish Embassy in London.

The second edition of the Festival of Spanish Queer Literature in London, a project that was born from the London-based online bookstore Romancero Books, will take place between Wednesday 23 and Saturday 26 November. In this edition the festival will be a hybrid of online and face-to-face events in different venues of the city; from the Spanish embassy ​​to the Cervantes Institute in London or the October Gallery located in Bloomsbury.

The London Festival of Spanish Queer Literature – FLQEL is a point of reflection among readers, writers, critics and people interested in LGTBIQ+ culture.

For this second edition of the FLQEL we are going to welcome some of the most outstanding names of queer literature and LGTBIQ+ activism from Spain and Latin America, such as Paco Bezerra, Katya Adaui, Ariel Florencia Richards, Eva Baltasar and Joaquín García Martín to among others.

The programme consists of 4 live events, 3 podcast episodes and 3 pre-recorded online talks. Tickets can be purchased through this link.

The festival’s objectives are:

Romancero Books is an online bookshop of Spanish and Latin American literature based in London. Our catalogue covers themes such as Lorca, female writers from Generación del 27, writers in exile and diaspora and new LGBTQI+ voices as well a large programme of cultural events called Romancero Talks.