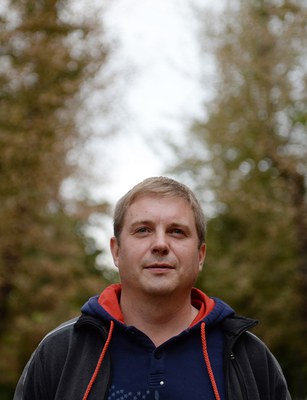 I was born in a country where fearlessness was an unwavering ideological dogma, running like a red thread through every book, film, and newspaper article. The Red Army soldiers knew no fear in combat. Nor did underground agents under torture. Cosmonauts and polar explorers. Modest engineers faced with problems in production. Pioneers and combine drivers, border guards and kolkhoz workers. The exalted vocabulary of fearlessness, the synonyms of epithets for glorifying exploits, was extremely rich. The language of fear was dull, repetitive, caricatured: pale face, trembling hands…

Yet the temptation of fear and cowardice was a cornerstone of Soviet culture; overcoming fear and with it everything that was petty, personal, quotidian, was considered a rebirth, the acquisition of true communist consciousness.

Even the body of the ideal Soviet man, described by writers with metaphors that replaced human flesh with steel, stone, or concrete, overcame and rejected physiological fear.

In the northern city of Inta, in the regions of the camps, I saw aging “Stalin” houses, with the plaster and cement peeling off. Instead of rebar—there probably wasn’t enough—the walls and balconies were reinforced with rods made of twisted barbed wire.

Fear, barbed fear, was the “rebar” of the Soviet regime. All the stronger because later Soviet generations, who no longer had the threat of being shot hanging over them, did not perceive it as fear. The way silence becomes taciturnity, a phenomenon becomes a characteristic, so fear mutated, crept and permeated habits, character traits, life strategies, choices, consciousness and language.

Twentieth-century Russian history has two moments, two months, illuminated by the special light of memory. They are February 1917 and August 1991. Memoirists describe those two historic instants, separated by 74 years, in the same emotional range: as if the shackles had fallen, and people felt the spirit of brotherhood, goodness, and hope for the future.

They were two moments, two historical epiphanies, when fear vanished and it seemed that Russia had found freedom.

But after February 1917 came October and Bolshevik takeover, and after August 1991 came October 1993 when during a confrontation between President Yeltsin and the Supreme Soviet, tanks fired on the parliament.

Twice in a single century October in the Russian political calendar marked a turn from freedom to authoritarian rule, from joy back to fear.

Today my country is sick with fear. Like a contagious patient, it is trying to sow fear among its neighbors. A fractured and weakened Europe, devoid of political and human solidarity, immersed in its own phobias is very useful for the Putin regime.

Vladimir Putin is a political figure created by fear. In the late Soviet period, fear of the state was rationalized and predictable. Post-Soviet Russia, which faced economic collapse, an irrational fear of terrorist acts, new for former citizens of the USSR, and a totally unpredictable future, gladly embraced the new president promising protection, order, and stability.

But Putin, formerly of the KGB, the repressive Soviet institution, probably knows no method of management but fear. Many analysts consider him a complex figure and seek a double or triple meaning in his actions and look to signs and signals for explanations. In fact, Putin is master in only one genre—the genre of fear. Like any person who does not know the value of trust and lacks positive, constructive emotions, he himself is susceptible to fear.

When the authoritarian regime of Russian protégé Yanukovich was overthrown in Ukraine, political hysteria broke out in Russia. Soviet propaganda clichés were pulled out of the dustbin of history, and the rebellious Ukrainians were called fascists, the greatest evil of the past century.

I think the Russian leadership was frightened. Frightened of the Ukrainians who could come out onto the square, Maidan, stand under bullets and not step back. It was scared that the Ukrainians were capable of overcoming their fear and thereby depriving Russia and its president of the only method of influencing them.

Today, Ukrainian political prisoners, for example film director Oleg Sentsov and activist Alexander Kolchenko, illegally detained in Russia, are getting sentences comparable to those in the Stalin period: 10, 20 years. The state media gloat over every failure in Ukraine. Crimea, which belongs to Ukraine, is occupied by Russian troops. A war is raging in eastern Ukraine, a war started by Russia and fought de facto by the Russian army, Russian mercenaries, and secret services.

Russian society is unable to resist. The fear of calling aggression aggression, war war, and turpitude turpitude, to be in the minority, is making even many opposition figures choose intermediate, devious positions, avoiding answers, refusing the moral responsibility born by citizens for the crimes of their state.

But those who support Vladimir Putin’s policies are not free from fear, either. Russian soldiers who died in eastern Ukraine are buried in unmarked graves and their families are not allow to publicly acknowledge their deaths.

Morality is collapsing, and the concepts of good and evil, decent and indecent, are vanishing. As signs of this dissolution, signs of the cultural catastrophe, Soviet symbols and myths, once thought dead and gone, are coming back, the evil mustachioed corpse, Stalin, is coming back: his bust at the Kremlin Wall is now swamped with red flowers of the unfortunate day of birth. The loss of historical 5 memory does not occur on its own, it is the symptom of moral collapse and corruption; we see not only the desire to justify the past, make it comfortable and nostalgic, but also to justify, by using the past, the crimes of the present, to portray these crimes as historically reasoned and righteous actions and even exploits.

Russia has embarked on the shameful Soviet path, the path of foreign and domestic aggression, when there are enemies abroad and in the next alley. Russia is investing in fear, by supporting rightist parties in Europe, whose agenda exploits nationalist phobias, by inciting conflicts, creating a poison atmosphere of hostility, forcing opponents to stoop to the language of hatred.

Russia is approaching the centenary of the October revolution of 1917 without mourning the victims of Communism, without accepting the heavy responsibility for everything that was done in their own country and others in the course of the long twentieth century. Without confessing to the fears of generations and without admitting guilt.

This is truly frightening because the evil of the past is becoming the evil of today. Twice as dangerous, because it has remained unpunished.

This blog was originally published on ELit Literature House Europe website on 23 November 2017.