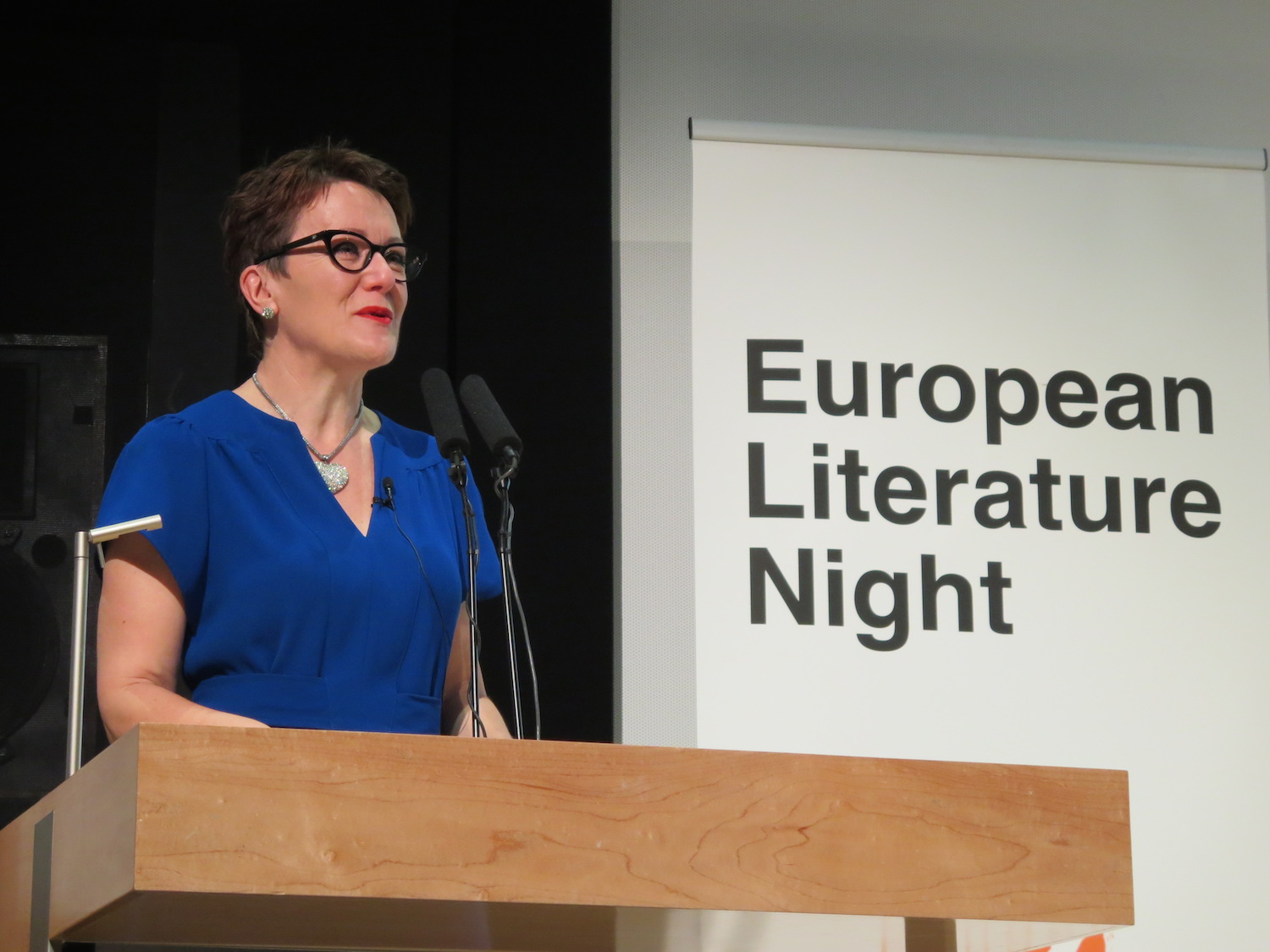 European Literature Night: a vote for Europe?
by Rosie Goldsmith

It will hardly have escaped your notice that we are in the midst of an election campaign in the UK and that one of the key platforms is European literature: do we allow it in to the UK or do we keep it out? Is it taking over our home-grown English literature? Should there be a referendum on it? What are the business advantages to the UK of supporting it? And so on.

On May 13th there’ll be some key post-election analysis at our annual ‘European Literature Night’ at the British Library. However, as your host I feel obliged to warn you that I have already come out in favour of European Literature. Sorry, but The Lady’s Not For Turning.

We’ve enjoyed an impressive pre-election build-up. Our ELN manifesto was published in early autumn 2014; nominations closed in December; the jury met in January 2015; early results were published in March 2015. In the interests of transparency and full disclosure I reprint some sections of the official ‘ELN Call For Participation’, sent out to all ‘Cultural Institutes or Embassies, literary organisations, educational institutions, publishers, booksellers and professional literature practitioners’ stating that nominated writers,

* Must be reasonably established in their home country…
* Must have had a book published in English after January 2012 or… by May 2015;
should preferably speak English sufficiently well to be able to participate in readings and discussions.
* Must supply an extract of work (up to 15 pages of a novel or a small selection of poems).

As ELN party leader for the seventh year running (although my re-election seems to be based purely on my shoe choice), I take my responsibilities seriously. My New Year’s Eve was spent reading through 44 literary extracts from all over Europe, including a high representation of what is officially termed lesser-known languages and minority cultures in UK-Eurolit politics: Croatia, Cyprus, Latvia, Macedonia, Slovakia and Slovenia. And if you are a keen pollster and trend-spotter you’ll be pleased to know there was a good spread between ‘East’ and ‘West’ (are we permitted to distinguish these days?), of publishers, of well-known and lesser-known writers; a broader spread of genres than other years – including our first e-book and Young Adult novel. But one trend remains constant: the presence of the big fat Spanish novel. (Discuss: do the Spanish write longer novels than other nationalities?).

The quality of translations was also excellent (an upward trend). And a first: nearly half of all submissions were written by women. Sadly though, by the time we judges convened, and I was forced to relinquish total control over the party, our final selection of 6 authors comprised 4 men and only 2 women (although one author masquerades as a woman – the French novelist Yasmina Khadra is a man).

However, reflecting the UK’s general election landscape, ELN boasts a high representation of women in leading positions, both running the campaign and the final show: Sarah Sanders and Sharmilla Beezmohun of ‘Speaking Volumes Live Literature Productions’; Janet Zmroczek, Head of European Studies at the British Library and the deputy Director of the Czech Centre Renata Clark. (And I hesitate to point this out, but I am also a woman.) Increasingly though ELN men are forging ahead and making up for decades of oppression. See the full list of events and participating male members here.

So what are we to make of our final list of candidates? Our Six Authors in Search of Fame and Fortune in the UK are supremely multi-cultural, a testament to the broadmindedness of the British voting public, a guaranteed boost to the publishing and bookselling economy (book sales at ELN in 2014 were, to quote one voter’ ‘bonkers’) – and quite frankly all six books are a joy to read.

Naja Marie Aidt brings her crisp and clear short story collection Baboon from Denmark, although rather excitingly she is originally from Greenland (another ELN first); Yasmina Khadra, author of ‘The African Equation’ is that superb male novelist from France, writing under his wife’s name (how times have changed, dear Reader); Andrea Bajani is a novelist, playwright and journalist from Italy and for once the book blurb is correct – ‘Every Promise’ is ‘remarkable’; Wioletta Greg from Poland is this year’s perfect ELN poet, taking us on a moving literary journey through her family history with her collection ‘Finite Formulae and Theories of Chance’; Evald Flisar is from Slovenia and his novel ‘My Father’s Dreams’ is, as promised, ‘controversial’, ‘shocking’ and ‘sensual’ (an erotic first for ELN!), whereas Jesús Carrasco from Spain has written the heart-breaking, visceral novel ‘Out In The Open’ – compared with Cormac McCarthy’s ‘The Road’ and, bucking all Spanish trends, it is only 184 pages long.

So, there you have it: my vote in May is for European Literature. And as party leader I encourage you to vote ELN too. See you at the polling booths on May 13th.

This blog was originally published on British Library European Studies page on 1 May 2015.