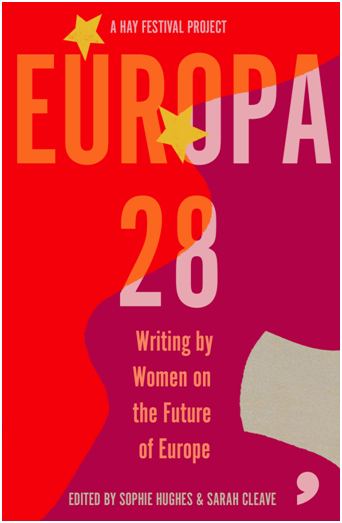 Europa28. Writing by Women on the Future of Europe, edited by Sophie Hughes & Sarah Cleave

28 women each represent one of 28 EU countries, and share their vision for the future of Europe from across disciplines such as literature, business, science and the arts

‘To be European,’ writes Leïla Slimani, ‘is to believe that we are, at once, diverse and united, that the Other is different but equal.’

Despite these high ideals, however, there is a growing sense that Europe needs to be fixed, or at the least seriously rethought. The clamour of rising nationalism – alongside widespread feelings of disenfranchisement – needs to be addressed if the dreams of social cohesion, European integration, perhaps even democracy are to be preserved.

This anthology brings together 28 acclaimed women writers, artists, scientists and entrepreneurs from across the continent to offer new perspectives on the future of Europe, and how it might be rebuilt. Featuring essays, fictions and short plays, Europa28 asks what it means to be European today and demonstrates – with clarity and often humour – how women really do see things differently.’

Sarah Cleave is the publishing manager at Comma Press and is the editor of Banthology: Stories from Unwanted Nations (2017).

Sophie Hughes has translated novels by several contemporary Latin American and Spanish authors, including Best Translated Book Award 2017 finalist Laia Jufresa (Umami). Her translations, reviews and essays have been published in The Guardian, The White Review, the Times Literary Supplement and elsewhere. She has been the recipient of a British Centre for Literary Translation mentorship and residency, a PEN Heim Literary Translation grant, and in 2018 she was shortlisted for an Arts Foundation 25th Anniversary Fellowship.