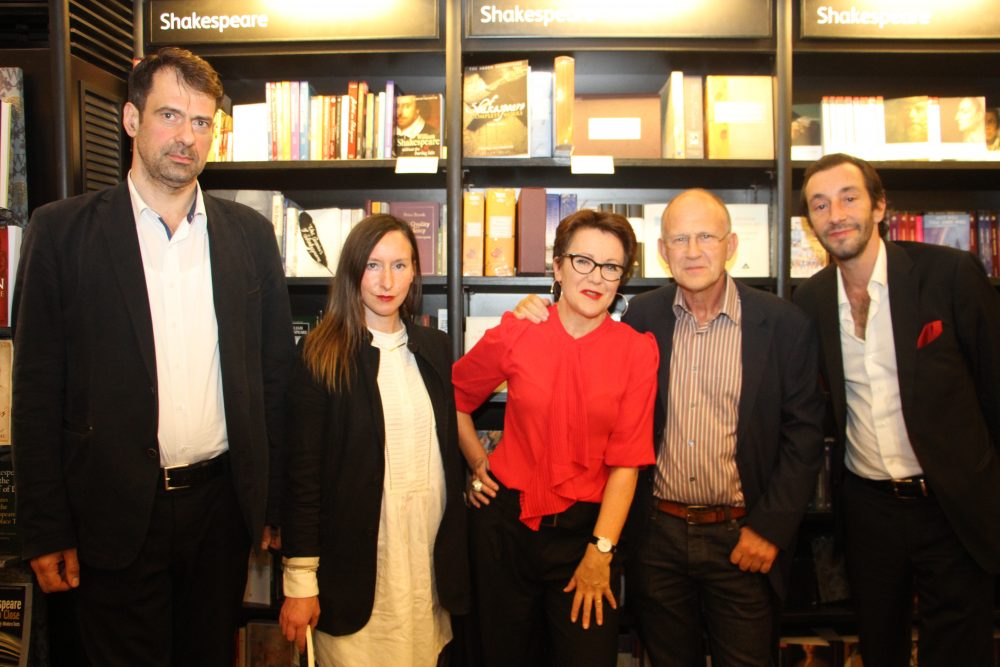 Euro Stars Salon – European fiction in the UK: In or Out?

‘EUROPEAN FICTION IN THE UK: IN OR OUT?’

Curated and chaired by Rosie Goldsmith, Director of the European Literature Network

An evening of readings and lively debate about their own work and the literature of wider Europe with our EURO STARS: British author, essayist, translator and Italophile TIM PARKS; French novelist ANTOINE LAURAIN; British writer and illustrator JOANNA WALSH, and the Romanian diplomat and prize-winning *EUPL author CLAUDIU FLORIAN.

EURO STARS is a new way of presenting European literature in English in public in the context of the culture and continent it comes from. And because @eurolitnet we believe so fervently in sharing our love of literature, and in working across all media and art forms, we also like to create an online record of all our big events. And it’s free!

We held our last EURO STARS at the end of April 2016. We called it CULTURE MATTERS. It was a panel debate featuring major writers and thinkers discussing the culture of Europe on the eve of the UK’s EU referendum. We believe that the cultural voice was largely ignored in our country during the referendum and that culture matters even more as we gear ourselves up to leave the EU.

We’re proud of our debates and events and believe that we can make a difference in promoting international arts, literature and translation. Do support us, do check out our ‘media package’ and remember we are doing this for you.

And BIG LOVE goes to all those who funded and supported EURO STARS especially:

ON WITH THE SHOW!

Judith Vonberg reports from the event:

So it was that British writer Joanna Walsh invited her twitter followers to the second Euro Stars debate of 2016. Solve Brexit? It was of course a joke, but the discussion that evening on the future relationship between Britain and European literature was an earnest one.

We gathered on the third floor of Waterstones in London’s Piccadilly Circus, Europe’s largest bookshop and a booklover’s paradise. In front of the rows of seats was a table displaying a selection of books as eclectic as the writers to whom they belonged. The shelves to our left and right were filled with beautiful volumes on classical music, opera and dance, the perfect complement to an evening spent discussing European culture.

Rosie Goldsmith, founder of the European Literature Network and tireless champion of European literature in the UK, introduced the four panelists. Tim Parks is a prolific British writer who has lived in Italy since 1981. His most recent novel, Thomas and Mary: A Love Story, was published earlier this year by Harvill Secker. Next to him was Joanna Walsh. Her writing has appeared in Granta Magazine and was anthologized in 2015 in Dalkey’s Best European Fiction. Vertigo, a collection of Walsh’s short stories, was published earlier this year. To her left was Antoine Laurain, a Parisian journalist, antiques collector and prize-winning novelist. He was a guest author at European Literature Night 2014 in London and his most recent novel, French Rhapsody, is published in English this month by Gallic Books. Claudiu Florian, prize-winning EUPL author, was the fourth panelist. He works at the Romanian embassy in Berlin and wrote his first novel – in German, his second language – over many months, while on the metro commuting to and from the embassy. He has since translated it into Romanian and an English excerpt is published in this year’s EUPL volume of winning authors.

Each of the writers had very different views on the future of Britain’s literary relationship with the European continent. Walsh, who likes to collaborate with friends and writers across Europe, opened the discussion by expressing her deep concern about the impacts on visa-free and low cost travel for Britons wanting to spend time on the continent. She spoke of more intangible changes too, fearful that cultural connections could be damaged. ‘It is frightening to think what might happen if this closeness disappears,’ she said.

Tim Parks had the opposite view. ‘I’m not the least bit concerned about the situation,’ he said, and he spoke of Brexit as ‘a fascinating development.’ He argued that cultural connections are created or destroyed organically, not by large institutions like the EU. ‘It is not at all clear that the EU has been a motor for cultural change,’ Parks said.

Laurain and Florian offered more moderate ‘outsider’ perspectives. ‘The EU will continue to be influenced by the English and by English culture,’ said Florian. ‘The EU cannot and will not do without Britain.’

Laurain stressed the importance of the intangible ties between Europeans. ‘We are all connected,’ he said simply. And this was coming from a man who was born and still lives in the same district of Paris where six previous generations of his family lived and worked. ‘My own story is not so much a European story,’ he admitted. Yet for him, being proud of his French, specifically Parisian, heritage does not preclude a sense of kinship with other Europeans. With this contribution, Laurain offered hope that a growth of national sentiment in Britain need not necessarily mean a wholesale rejection of European identity.

Florian, on the other hand, is an embodiment of European cultural, linguistic and ethnic confluences. He described how Saxon, Germanic, Romanian and Transylvanian influences informed both his own life and his writing. We were treated to an aural display of Florian’s trans-national identity as he read extracts from his novel in German, Romanian and English, each his own translation.

Indeed, each of the readings by these European wordsmiths was a feast for the ears and the linguistic taste buds of the international audience. We heard extracts from Laurain’s newest novel in both French and English, while Parks read a comical but poignant chapter from Thomas and Mary, and Walsh the opening story from Vertigo, ‘Fin de Collection’.

These were four very different writers with very different ways of writing and thinking. Yet they had come together to talk about Europe and the result was a stimulating evening of words and ideas. It was only after reading literature from other cultures, European and not, that she was inspired to try writing herself, Walsh told us. It was the diversity of models and styles that excited her, she said. This and the presence of these four diverse Europeans reminded us that the value of Europeanness is in the diversity of people and ideas that it encompasses. This diversity will not disappear with Brexit and nor will the intangible cultural connections forged between individuals, communities and nations. EU or no EU, Brexit or no Brexit, we are, and will remain, connected.

Photos from the event by Max Easterman 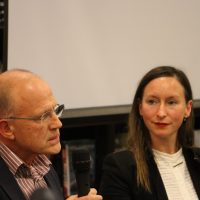 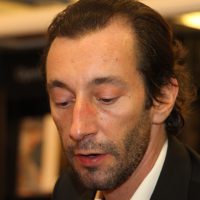 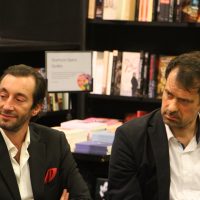 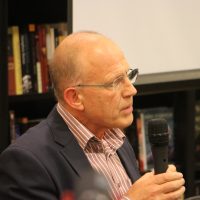 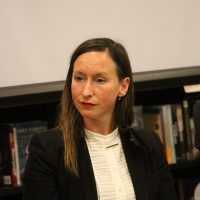 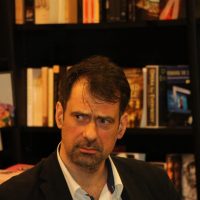 Photos from the event by Alex Coman Photography 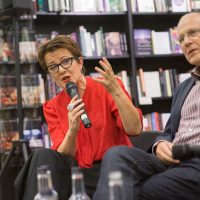 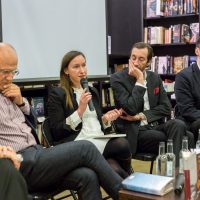 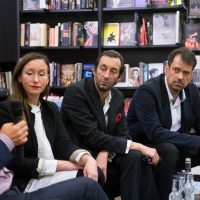 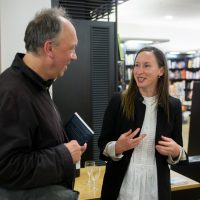 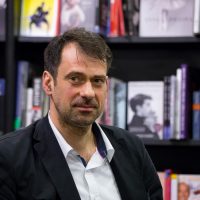 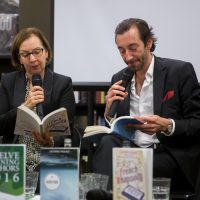 Video of the event by London Video Stories.

Drawings from the event by Ian Long. 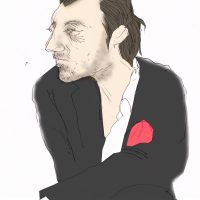 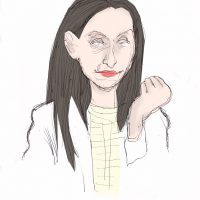 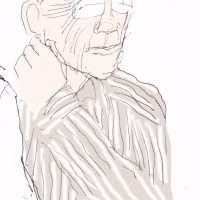 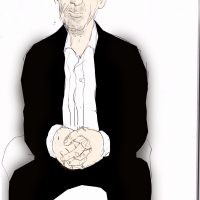