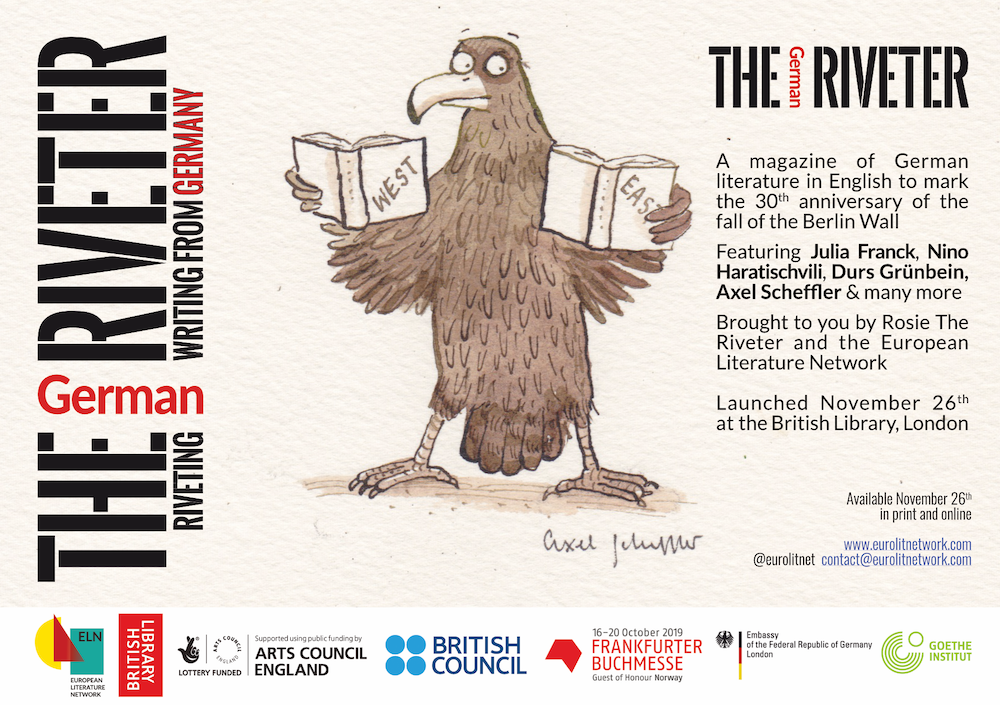 Ten years ago we did not exist. Can you imagine? No European Literature Network, no website, films nor podcasts; no events, festivals, reviews (let alone RIVETING reviews); no Riveter magazines and no network which today spans thousands of people across the world. As our country shrinks, the European Literature Network has become a whole continent – peopled by all of you. I like living here. Ten years ago I left the BBC to go solo, thinking I might take up salsa dancing or chocolate-wrapper-collecting but thankfully my love of literature and Europe were stronger. Then I met Anna Blasiak. Then West Camel. Then Alyson Coombes. Now we are four. Four and poor – but happy! To celebrate the talented folk I work with I thought I’d let them take over the newsletter this month. Starting with Anna Blasiak. I may be Riveter-in-Chief in name but Anna – poet, translator, ELNet manager and website producer (etc etc etc) – is the true power behind the throne.

My September has been a whirr. For most of it I’ve been ping-ponging between the UK, Poland, Italy and Romania. But what a month it was! I was invited to come to Venice for a workshop/residency/fellowship (we had some discussions over what it actually was) organised by the Jewish Book Week and Beit Venezia. Wonderful people from those two organisations brought together young Jewish writers from several European countries and their English translators. We worked, but also explored and experienced the Jewish face of Venice. On top of that, a lot of coffee, prosecco and pizza was had. It was a full immersion, it was the greatest of adventures. I had the honour and the great pleasure of meeting and working on a translation of a short story by Ewa Cieplińska-Libner from Warsaw.

After Venice I went to Timisoara for the amazing LitVest festival organised by the poet Tudor Cretu. Now, imagine poetry readings on a boat on the Bega river, in the intervals during a concert of a blues-jazz-folk band (with a violin player so good it gave you goose bumps), poetry accompanied by boxing, karate and gymnastics, poetry read in the lights of motorcycles parked on two sides of a square. Can you in fact imagine it all? Because that is exactly what happened in Timisoara! There was also a lot of late-night, international poet-bonding, a lot of walking around this beautiful city, popping into museums and galleries and some delicious kurtos kalacs from a Hungarian festival happening that very weekend. Ah, September 2019, I will miss you…

West Camel (editor, author, named after a village in the South West of England – hoping his name will suffice to secure us an ACE grant for ELNet in SW England)

This summer I have been performing my usual juggling act – commissioning and editing content for ELNet’s #RivetingReviews and for The Riveter magazine, editing fiction for Orenda Books (much of it European work, in translation) and writing fiction of my own – my second novel is scheduled for December 2020, so I have my work cut out. A couple of weeks ago I took my debut novel, Attend to Brighton’s The Coast Is Queer literary festival. I took a box of Queer Riveters along with me, too, and they were snaffled up in a trice. The appetite for European literature seems fierce on the south coast.

October holds more treats. Attend has been shortlisted for the Polari First Book Prize, and the winner will be announced on the 22nd, at an event on the South Bank. Before that I’m off to the Frankfurt Book Fair, where the guest of honour this year is Norway. With Orenda Books’ five Norwegian authors all appearing, as well as lots of networking to do, discussing ELNet and future Riveters, it will be a busy few days.

Work on The German Riveter is intensifying, and I can promise you all one of our best editions, with fascinating features and articles from German authors, translators, poets and journalists, ruminating on the thirty years since the fall of the Berlin Wall. But before that, in October, we have our Czech and Slovak special #RivetingReviews, with guest editors for each language, and we have just published a superb collection of ‘general’ reviews for September – twelve this month, from our panel of astute critics. Enjoy these and spread the European literary love by sharing them far and wide.

For me, the last few weeks have been taken up with co-editing the latest issue of New Books in German. Filled with reviews of twenty new German-language books spanning fiction, non-fiction and children’s & YA, as well as articles, poetry and interviews all touching on the theme of European identity and the importance of cross-border collaboration, this really has been a fascinating and poignant project to work on. I was also fortunate enough to attend the International Translation Day event on 30 September at the Free Word Centre. There was a very interesting panel discussion on poetry and translation, exploring issues relating to fidelity, intimacy, activism and language, and three translators pitched exciting books by Austrian, Lithuanian and Bulgarian writers to a panel of editors. Coming up, I’m very much looking forward to the launch of The German Riveter in November, and to the New Dutch Writing event at the British Library on 12 October!

Thank you Alyson, Anna and West. All that remains for me to do is to remind you that the deadline for the EBRD Literature Prize submissions is 15th October 2019. Our big ELNet autumn event is The German Riveter launch on 26th November at the British Library. It will feature as many riveting Germans and their translators as we can fit between the covers – designed, by the way, by none other than Axel (Gruffalo) Scheffler, who also illustrated our flyer. Book your tickets here. On the 28th November there is a second event at the Goethe-Institut London. Also, don’t miss our unmissable (!) monthly online Riveting Reviews: September’s reviews are now live, and this month we are running reviews of Slovak and Czech literature (deadline for submissions: 25th and publication: 31st October). Do get in touch with West Camel, if you’d like to review: west@westcamel.net.

November and December will be dedicated to German literature and The German Riveter.

Finally keep the evenings of 9th and 10th December free – it will be our 10th anniversary European Literature Network meeting. Whatever happens to Britain in Europe, ELNet will always be proudly European.