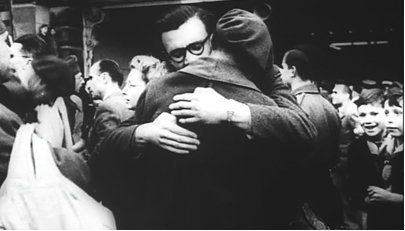 Documenting Nazi Atrocities – Early Films on the Liberation of the Camps

To commemorate 70 years since the end of the Second World War, the Goethe-Institut London is showing a series of films documenting the liberation of the Nazi camps.

Straight after the war, the Allied programme of ‘re-education’ aimed to confront the German population with its responsibility for the rise of National Socialism and its extermination policies. Moving images played an important role in this process.

The Goethe-Institut is running four film programmes with contributions from the four Allied Powers. The films were made between 1944 and 1946. Rarely seen and some translated into English for the first time, they bear witness to the atrocities committed against Jews, Roma and Sinti and other groups declared as ‘undesirable’ by the Nazis.

Two additional programmes include later works by filmmakers such as Chris Marker, Alain Resnais, Harun Farocki and Emil Weiss, who take a more personal view and stand out for their new approaches to representing the camps.

The series is accompanied by discussions with historians and film experts on those early productions and how they were reworked as archive footage, also bringing this history up to date by reflecting on how we depict violence and atrocities today.

In collaboration with IWM London (Imperial War Museums), the University of Essex, Queen Mary, University of London, and the Institut français du Royaume-Uni.