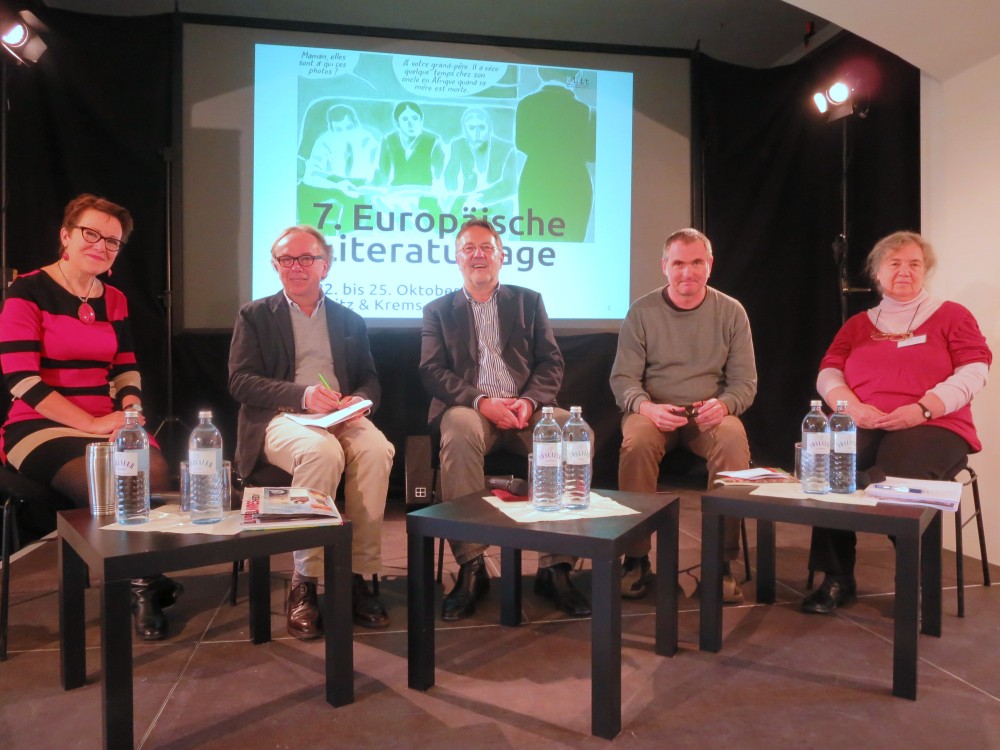 Here is a summary and brief overview (in note form) of our discussion at the ELit symposium in October 2015.
Please credit/name-check ROSIE GOLDSMITH/ELit if you quote any references.

ROSIE GOLDSMITH: INTRODUCTION
Outside it’s a golden autumn day. We can see vineyards and sunshine from the windows and here inside we try to grapple with one of the most difficult tasks of the whole 3 ELit days: to sum up the main literary trends in Europe of past year – and also which language we should discuss them in! The ELit participants and my panel come from France, Germany Switzerland, Hungary and UK. Our overview will be by no means definitive or even cover the whole of Europe. But the fact is that even online, googling etc, it is hard to find an overview of ELit trends In fact ELit itself (us!) comes up as one of first postings online, so that’s proof indeed that we are attempting something new and pioneering; the result also of a collection of blogs and discussions conducted over the past year. My panel are:
Christian Gasser lives in Lucerne, Switzerland, author (also of GN), co-editor of the comics magazine, Strapazin. He is among the most visible, knowledgeable promoters of the graphic novel in German-speaking countries.
Eva Karadi innovative and tireless Hungarian university lecturer and literary events organizer. She publishes the Hungarian version of Lettre Internationale and runs the European Cultural Foundation in Hungary.
Rainer Moritz, German literary scholar and academic, writer, publisher and translator. He is Director of the Literaturhaus Hamburg.
Jürgen Ritte, French-German literary scholar and academic, translator and writer. He is Professor at the Université Sorbonne Nouvelle in Paris.

JÜRGEN RITTE (France)
To judge from the main indicator, the Grande Rentree in the autumn, when he has to summarize trends in French publishing, when 400 novels are published: about 17% in translation – from English (7000 titles this year), second place – from Japanese 1400 titles, a lot of Manga; 3rd place – translations from German.

In Germany according to Rainer Moritz: 30 % translated – most from US and UK, then the usual Scandi crime novels – unbroken interest; Umberto Eco too. RM has also noticed great interest in East European literature in translation. In Germany it does depend on the Frankfurt Book Fair focus – this year Indonesia, less interest though than there will be next year when Flanders and Netherlands are the Country Focus. He predicts a big boom in translation from the Dutch – such an accessible country.

Mass of crime writing festivals in France – 70 at last count (according to Jamal Mahjoub). He says now he is writing crime novels he gets invited everywhere, especially in France. Crime novels – all agreed – were becoming more literary, acceptable, yardsticks, as literary trends.

TREND: Fiction and History. Laurent Binet, Yasmina Khadra, authors who put themselves in the heads of others, started perhaps with HHhH by Binet. Khadra this year as Dictator Gaddafi (also in English, from Gallic Press)

„Charlie Hebdo Jan 7th overshadowed everything, coincided with Michel Houellebecq’s SOUMISSION – judged more for its alleged anti-Islamic stance than for literary quality because of the political context.“

France most important Graphic Novel country – 5000 published in 1 year in France: Germany and UK emerging still but stabilizing. Comics still trying to find their place in the cultural world. Lack of ideas or real trends and innovations.
Independent publishers of GN declining.

2-300 GN adaptations of literary works every year – to get kids to read them? And that creates more commercial sales

The Media are opening minds to GN but tendency to jump on shortlived „trends“ such as ‚cooking and comics‘..after only few books published.

Digital and online developments of the GN – still only 1% of what’s read is online.

Very different format. Difficult for format to deal with comics; comic strips are easiest but whole books not yet successful. The single panel is key and can’t yet view it properly online. One of the special things about comics is that they are usually visually attractive – beautiful objects in design and layout – can’t reproduce that yet in ebook form.

The ebook is a non-trend in comic world. No model yet but will probably come.

HOWEVER there has been a renaissance of the comic strip – in online form. Perfectly suited.

And various other ideas being tried out online: Motion Comics, interactive…

It is nearing the end of the comic as we have known it for 180 years but not sure how. Existential crisis.

TRANSLATION AND COMIC BOOKS? In france 50% of comics/GNs are in translation! Of the 5000 published. In Germany according to Rainer Moritz 80% of comics published are translated.

It is the nature of the comic – global phenomenon and best are not necessarily home grown.

BEAT MAZENAUR (Switzerland)
TREND: autofiction, fiction is going back to the roots, back to the self. AND publishing in dialect in Switzerland.

EVA KARADI (Hungary)
TRANSLATION: under communism there were translators for all languages. Then in the new era the first books to be translated were crime novels and romance. Today people are ready to read more serious literature as well and translation GRANTS have become very important. So Eva (and many colleagues) actively pursue grants, also from the EU: she has close contact with EUPL Prize in Brussels

TREND: Hungary, Eastern Europe – across the region translation is essential for global contact, more and more people learning English as the main language of communication, especially as so much is online.

Even though Hungary is currently makes headlines for political reasons and refugees and ultra conservative PM Orban, it is still the political situation under Communism has left lasting legacy on publishing and books – still being shaken off. But the trend Eva notices is that this is finally happening and new kind of literature not directly linked to Communism is emerging, telling the stories before that time.

TREND: Holocaust stories, not published before, liberated from political constraints of previous decades.

Cuts in arts, media in Hungary; importance of new internet platforms being developed.

So many young people leaving Hungary – 500,000 – that there is new form of literature being written coined called EXPAT literature – written outside HY

RAINER: there is a crisis in lit crit. STYLE over substance, books rarely judged on lit value alone..

TREND: flooded with lit crit online – all over Europe. So important to get to know the ones you can trust after a while. But with print less, online more. Inevitable – must accept, promote and support quality reviews and move on, make it work for us. The problem is also the lack of paid professional reviewers online.

Rosie Goldsmith/UK adds: I‘ve gone online out of frustration and because I need an outlet to review. There is not enough translated fiction reviewed so I started my own review section called #RivetingReivews on our website

The FEUILLETON is clinging on in German and French newspapers.

TREND: Dominance of the novel, the novel as the yardstick in society of literary quality
– The Autumn Novel flood/ the German Book Prize = indicators
– Crime novels have gone regional, city…
– family sagas over several generations

Big, long novels; non-fiction Fiction, as if there is a mistrust of fiction, people longing for the real and authenticeg. KARL OVE KNAUSGAARD now on the 5th volume in translation in Germany
German writers like Henschel: 12 volumes; Andreas Maier: 11 volumes

TREND: books about SELF

TREND: Return of the POLITICAL NOVEL or novels which respond to current events
Grass died this year but still have Walser and Enzensberger very active

NOVELS which look at the great ideologies of the 21st century

NOVELS DEALING WITH TOPICAL THEMES are popular. Then the author becomes the public figure asked to talk about the topic e.g. Jenny Erpenbeck wrote one novel featuring a refugee then she become The Expert.

Do novels have to tell us about our times? Often they do – depends on writers but David Eggers, Jonathan Franzen; Ian McEwan; Houellebecq – all do.

Uptake of ebooks in Germany? Slow…

Is there such a thing as the immigrant novel? Would we dare even call it that?

If we take as yardsticks: festivals, bestsellers, prizes in the UK we can say:
– greater range and variety
– arts cuts, cuts in libraries, making everything more ‘relevant’, pay its way
TREND: ELECTION/ TURMOIL in UK
Jeremy Corbyn, a LABOUR leader who reads books, speaks a foreign language. Not typical of politicians in UK where culture is pilloried as elitist.

In times of political insecurity the arts produce remarkable passion and creativity.

UK market commercially hand-in-hand with US market increasingly (and translation into English – constant being told that costs are too high for translation; one reason not enough translations).

TREND: FESTIVALS – the biggest lit trend, growing still, 100s all over UK, people gathering together to share ideas, the community, not just to talk about books but politics, society, the environment… Even in Cornwall where I come from there are now 2 festivals.

TREND: TRANSLATIOM: We are maybe more aware of translations and might seem that more is being translated but minimal. New up to date figures via Literature Across Frontiers (Alexandra Buchler’s website)

The big translation successes this year:
ELENA FERRANTE (strangely not yet translated into German or French!)
ORHAN PAMUK
KARL OVE KNAUSGAARD (Volume 4 of 6 into English; one a year)

IS MIGRANT LITERATURE, POST COLONIAL LITERATURE EVEN A TREND IN UK?

TREND: OUR ONLINE LITERARY LIVES. Most of our lives are spent online in UK (much more than in the rest of Europe) and strange that no one had mentioned it before now on the panel! Sign that we accept ebooks as inevitable and parallel to print (which will not disappear). Ebooks primarily commercial fiction at the moment. The beautiful book is still valued!