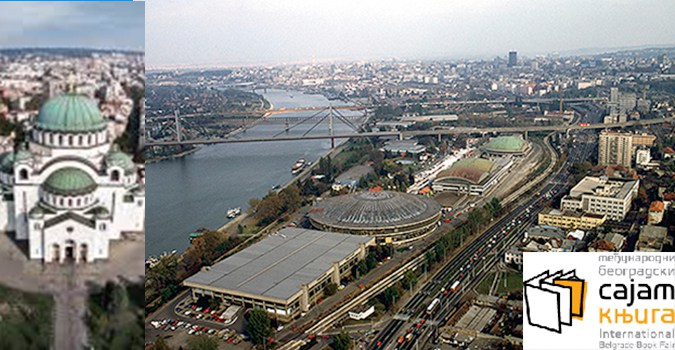 The opening ceremony of Belgrade Book Fair took place on Sunday 21 October, officially commencing one of the biggest publishing events of the region. There is no doubt that Serbia takes pride in this annual gathering of publishers and public, now in its 63rd year, with the writer and Academician Matija Bećković comparing readers’ attendance of the fair to worshippers in a church. Between his opening speech and that of the representative of the Guest of Honour – this year Morocco, the first Arab nation to have this accolade – the public was treated to performances from the opera singer Jasmina Trumbetaš Petrović, accompanied on piano.

Belgrade Book Fair attracts close to 200,000 visitors over eight days, including endless groups of primary school children and readers keen to purchase books at a discount or listen to their favorite writers in one of the many conference rooms offering a rich programmer of complimentary events.

There are 1,033 exhibitors and an international flavour provided by the twenty-one countries represented. The spectacular purpose-built venue that has been the home of the Belgrade Book fair since 1957 offers of 15,076 square meters of display space and a main hall canopied under a huge central dome perforated with rows of round windows – indeed more reminiscent of a modern cathedral than a trade exhibition center.

Once upon a time, the Nobel Laureate Ivo Andrić signed his novels for queues of expectant fans, while nowadays there are several large banners announcing that Serbian politician and convicted war criminal Vojislav Šešelj would be signing copies of his “academic works”. History is never far away in the Balkans: the previous fairground, on a site across the River Sava, was used as a Nazi concentration camp in World War II, a fact which haunts the recent work of Serbian Jewish writer, Filip David, The House of Remembering & Forgetting, (Peter Owen World Series, 2017).

Along with the preponderance of bearded Orthodox priests in their long, black robes, the local idiosyncrasies include a number of stalls in Hall 4 selling icons and candles along with religious texts. Serbia has always marked the frontier between the Western and Eastern ecclesiastical traditions, and the Cyrillic script stands alongside the Latin, adding to the thrill of the exotic “other” for any British visitor, although a lot of amusement could be had on realizing that even when using the same script, it is the Serbian habit to adapt international names to the phonetic rules of their language, thereby rendering the former poet laureate as Ted Hujz and the author of Ulysses as Džejms Džojs.

Local author Vladimir Arsenijević – whose debut novel In the Hold won Serbia’s most prestigious literary award – the Nin Prize – and had the unusual honour of being almost immediately translated and published in English by Harvill in 1996 and the following year in the US by Knopf – explains that the Serbian publishing scene is dominated by two highly successful players: Laguna and Vulkan. “It’s funny,” he jokes “because every lagoon has its own volcano. It’s like they planned it!” He goes on to explain that while in Croatia publishers relied on government subsidies to survive, leading to the recent financial collapse of the two main players Profil and Algoritam In the wake of the financial crash and the consequent withdrawal of state financing, in Serbia, publishing has always relied on commercial sales and library orders

It is remarkable that a market of seven million people can produce such an array of small independent presses, with smaller yet highly respected publishers Archipelag and Geopetika, (the latter won the 2018 London Book Fair Excellence Awards for Translation Initiative for their Serbian Prose in Translation series), each publishing around 30 titles a year including established local authors such as Vida Ognjenović and Vladislav Bajac as well as the expected international stars such as Murakami and Auster.

Belgrade Book Fair is held annually in the last week of October.

This blog was originally posted on The BookBlast® Diary on 27 October 2018.

Istros Books is raising funds to translate and publish UnderPressure by the war veteran and poet, Faruk Šehić. He combines beauty and horror to seduce and surprise the reader in his short stories.

Under Pressure was first published in 2004 in Bosnian and was awarded the Zoro Verlag Prize. Along with this collection of brutal and heart-wrenching stories, Faruk Šehić’s works have gained him a special place in the literature of the region and won him a number of awards.

Back this project HERE