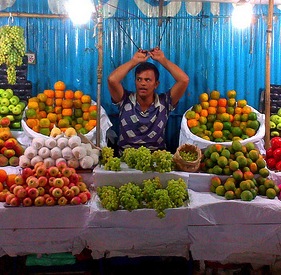 Back to Dhaka by Meike Ziervogel

In Spring I visited Bangladesh for a literary conclave. A few weeks afterwards I received an email inviting me to the Dhaka Lit Fest this month. I accepted the invitation in June.

Since then a lot has happened in that troubled country.

Islamic extremists have killed bloggers and murdered a leading publisher. Foreigners have been stabbed in the streets. The country has been placed on high alert of terrorist attacks. The British Foreign Office is advising citizens not to travel.

In October, the festival organisers began sending out updated security measures for our visit and international authors started to withdraw.

‘Am I being foolish in going?’ I ask the Nymph.

‘What does your instinct tell you?’ she replied.

My instinct was telling me that I could trust the organizers and if they became too concerned about the safety of their foreign participants they would cancel.

I’m so pleased you say that,’ Peirene admitted. ‘Because if people like us – professionals of the word: publishers and writers and thinkers – stay away from opportunities of dialogue, then how can we encourage others to use words not weapons to communicate.’ For that I loved my Nymph even a bit more.

So, last Tuesday Peirene accompanied me to the airport, gave me a hug and waved good-by as I lifted off into the air.

I was nervous in Dhaka, I can’t deny it. My fight-or-flight sensors were wide awake and every now and again brief scenarios of bombings and shootings flickered through my mind.

But. But. But. I’m thrilled I went. And let me not overdramatize. Yes, we were escorted by armed police wherever we went and 19 participants cancelled at short notice. Others, however, came, including Channel 4’s Jon Snow, South Bank Artistic Director Jude Kelly and British writer Marcel Theroux. And many more from India, Palestine, Kenya, US and Cuba.

But the real heroes of the show were the Bengali writers K. Anis Ahmed, Ahsan Akbar and Sadaf Saaz, the three directors of the festival. Of course they contemplated cancelling or postponing the event and their concern for our safety was evident. Yet, they also understand that perhaps now more than ever their country – and the world at large – needs places where people from different cultures exchange and explore new ways of imagining the future.

‘There is actually a fourth hero.’ Peirene is suddenly looking over my shoulder. ‘The audience. They defied public curfew and political strikes that were happening elsewhere in the city to attend the festival.’

What can I say? The Nymph is absolutely right.

This blog was originally published as part of Peirene Press‘s series Things Syntactical. The Pain and Passion of a Small Publisher on 23 November 2015.