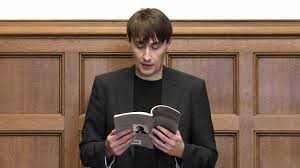 A way out that is non-extant by Aleš Šteger

This blog was originally published on ELit Literature House Europe‘s website on 7 March 2016.