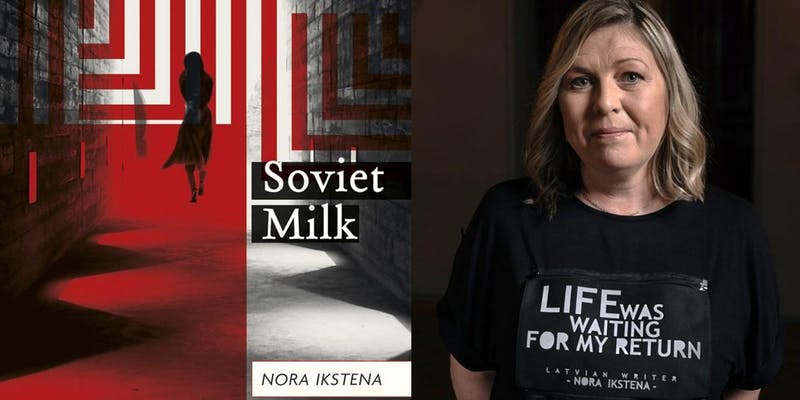 Join the Latvian writer Nora Ikstena in conversation with writer and book blogger Eric Karl Anderson on her best-selling novel Soviet Milk published in the United Kingdom by Peirene Press.

Nora Ikstena’s Soviet Milk has become popular amongst Baltic, UK readers and beyond. Within 3 years it has been published and book rights sold to 10 languages. As one of the most successful Latvian authors of her generation and the Author of the Day at the London Book Fair 2018, Nora has won several state awards: Order of the Three Stars for services to literature, the Baltic Assembly Prize and the The Culture of Excellence Award 2018, and numerous literature awards.

In the UK her book has been longlisted for the Republic of Consciousness prize 2019 and for the European Bank of Reconstruction and development (EBRD) Literature prize 2019.

Peirene Press: This novel considers the effects of Soviet rule on a single individual. The central character is deprived first of her professional future, then of her identity and finally of her relationship with her daughter. Banished to a village in the Latvian countryside, her sense of isolation increases. Will she and her daughter be able to return to Riga when political change begins to stir?

A blistering Latvian bestseller…Ikstena captures an era that seems almost unimaginable now, but which could all too easily return… – Claire Armitstead, The Guardian books editor.

What a perfect title: the strongest smell and taste of all – mother’s milk, the source of life, but in the life of this troubled mother and her occupied country, it is toxic – Rosie Goldsmith, European Literature network, EBRD Literature prize jury

Soviet Milk is a superbly crafted, deeply moving tale about what the author calls, “the bloody polka of history,” bringing into vivid focus the despair of life under despotic rule. – Samantha Shnee, Editor at Words Without Borders, EBRD Literature prize jury

Free tickets are available here. Please note there is no wheelchair, lift or ramp access to this building