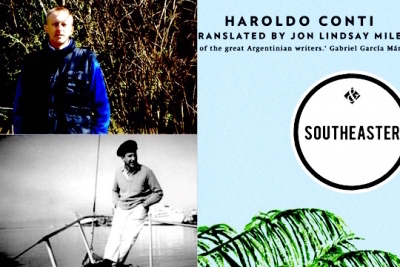 Wanderlust: Great Literature from Around the World

Wanderlust: Great Literature from Around the World is a new, monthly event series at Free Word. Join us on the second Monday of each month to celebrate the best of fiction in translation. Please contact Sophie Wardell for information on how you can get involved and come and join us for our first event on 7 September in partnership with And Other Stories:

Jon Lindsay Miles is the translator and re-discoverer of Haroldo Conti’s classic Argentinian novel Southeaster. To celebrate this first publication of Conti’s work in the UK, Jon will join us at Free Word to read from Southeaster and talk about his role as translator and discoverer of one of South America’s fascinating and oft-overlooked literary figures.

Haroldo Conti is one of Argentina’s best-loved 20th century writers. Hailed by Gabriel Garcia Márquez and Eduardo Galeano, contemporary writers love him just as much, with John Burnside and Tim Winton singing his praises. Conti’s life story has come to be dominated by his political views and his disappearance in the 1970s, but his writing stands as a testament to his talent and vision.

The story of how Jon discovered a dusty old Spanish edition of Southeaster in his local library in southern Spain, and decided to translate and self-publish the first edition of the book in English is unique and fascinating. Southeaster itself is a mesmerising tale of a man’s battle with himself and with nature, in which the wind and the river become characters in the story.

The event will be chaired by Sophie Lewis, translator and senior editor at And Other Stories. And Other Stories books, including Southeaster will be available to buy after the event.
Jon Lindsay Miles lives and works in southern Spain, where he publishes as Immigrant Press and teaches English conversation at an outpost of the University of Jaén. His translation of Southeaster is published by And Other Stories in paperback and eBook.

Sophie Lewis heads up editorial processes and develops new initiatives at And Other Stories. Sophie has translated French literature for publishers including Pushkin Press, Saqi Books and Hesperus Press. In 2007, she established the European office of independent publisher Dalkey Archive Press and remained sole manager there until the end of 2010. She has also worked as an editor at various literary magazines and as a literary agent.