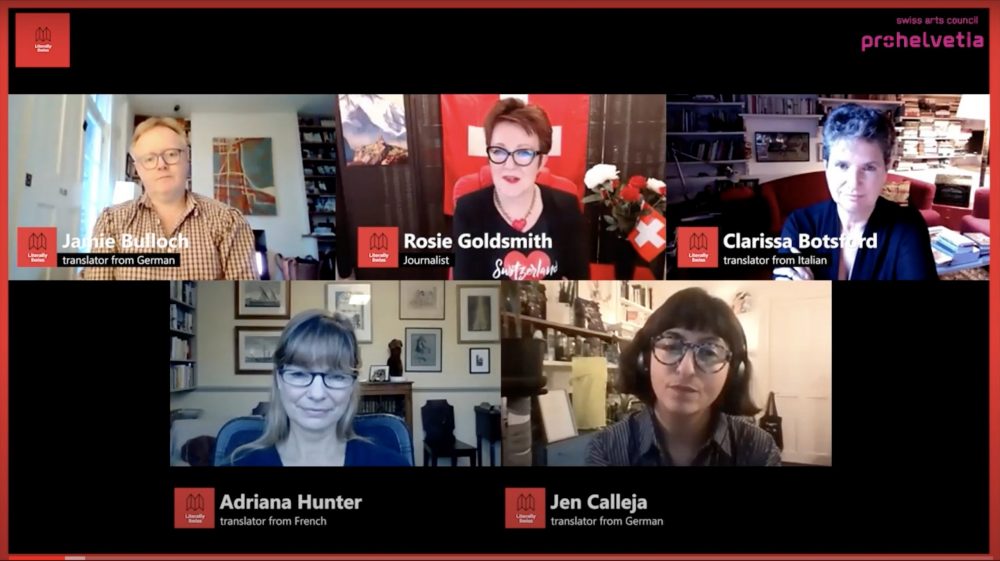 Round table discussion: how translators see their role in the relationship with publishers

The benefits of working with independent v large publishers

The impact of the pandemic on building relationships with publishers

How can we help translators to negotiate relationships with publishers?

How to gain the confidence of publishers

Why do some books simply not make it in the UK?

Round of translator pitches of Swiss books

Final tips for how to move forward

Clarissa Botsford is a literary translator from Italian with a particular interest in contemporary literature, crime, women’s literature and new Italian voices. Since the 2014 publication of her debut full-length literary translation, Elvira Dones’ Sworn Virgin, she has worked prolifically with publishers in both the UK and the US – including And Other Stories, McSweeney’s, Europa Editions, and Harper Collins. She also works as a musician, singer and Humanist celebrant and trainer, as well as teaching Language and Translation at Roma Tre University in her adopted home city of Rome.

Jamie Bulloch is a British historian and has been a professional translator from German since 2001. One of the most prolific literary translators working in the UK today, he has translated more than 30 books over the past decade for a range of publishers, including numerous titles for Maclehose Press and Peirene. In 2014 he was awarded the Schlegel-Tieck Prize for Best German Translation for Birgit Vanderbeke’s The Mussel Feast, and was also shortlisted for the 2020 Oxford-Weidenfeld Prize for his translation of her latest novel You Would Have Missed Me.

Jen Calleja is a writer and literary translator from German. Last year she was shortlisted for the Man Booker International Prize and the Schlegel-Tieck Prize for her translations of novels by Marion Poschmann and Kerstin Hensel. She has worked in an editorial capacity for New Books in German and 12 Swiss Books magazines, and was Translator in Residence at the Austrian Cultural Forum London and the British Library. She translated the Swiss author Michelle Steinbeck’s My Father was a Man on Landand a Whale in the Water, and next year she will translate Swiss artist Reto Pulfer’s experimental novel Gina.

Adriana Hunter is a literary translator from French, who has translated over 80 books since ‘discovering’ the first book she was to translate in 1998. Alongside her primary interest in literary fiction, she has experience of working on biographies, memoirs, popular fiction and graphic novels, as well as non-fiction areas including the arts, childbirth and family, dogs and horses. The winner of the 2011 Scott-Moncrieff Prize for her translation of Véronique Olmi’s Bord de Mer (Beside the Sea) and the 2013 French-American Foundation and Florence Gould Foundation Translation Prize for her translation of Hervé Le Tellier’s Electrico W, she was also shortlisted on two occasions for the Independent Foreign Fiction Prize (now the Man Booker International Prize).