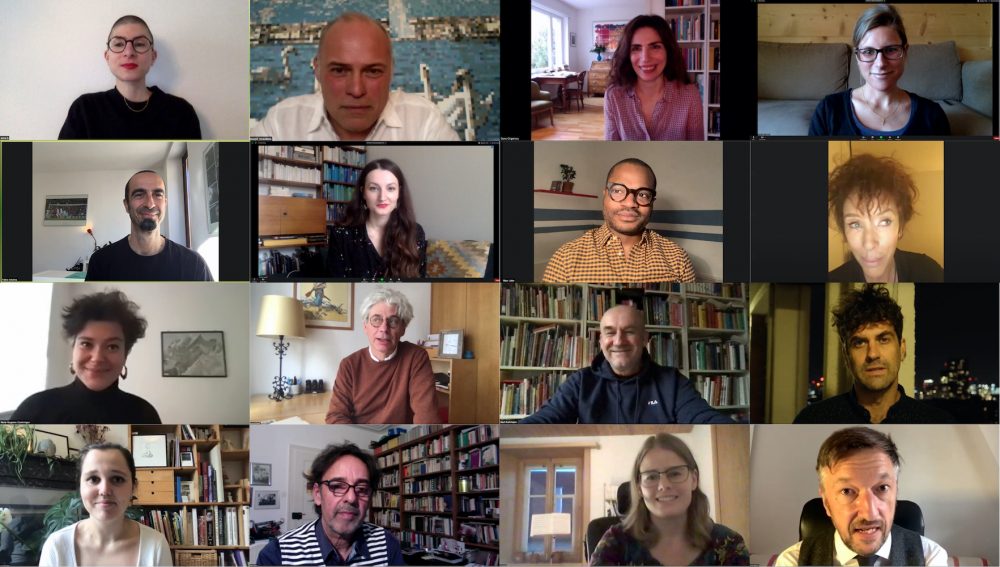 Winner of the 2020 Swiss Book Prize, Anna Stern is an exciting young Swiss-German author with five published works to date. Her prize-winning novel, which deals with coming to terms with the death of a close friend, was praised by judges for its “fully new form and unprecedented tone”. Originally from Rorschach, she is currently studying for a PhD in antibiotic resistance at the ETH Zurich federal technology institute.

Born to a Swiss mother and Italian father, Joseph Incardona is a multi-award-winning French-language novelist, scriptwriter, director and producer, whose work spans genres ranging from noir to graphic to autobiography. The author of twelve novels, two collections of short stories and three plays, his works have been translated into some ten languages, as well as being adapted into film. He lives in Geneva.

Based in Zurich, Dana Grigorcea is an award-winning Bucharest-born novelist, essayist and children’s book author who studied in Belgium, Germany and Austria before moving to Switzerland. She is the author of two German-language novels which have been translated into several languages, including English with her second novel An Instinctive Feeling of Innocence, published by Seagull Books in 2019. She is currently working on her third novel, which will be published in German in March 2021.

Anne-Sophia Subilia is an award-winning young Swiss-French author with degrees in literature from the universities of Geneva, Bern and Montreal. The author of three novels in French, her writing has been praised as subtle, economical and sensitive. She is also a member of the AJAR literary collective and has contributed to several collaborative works, as well as writing for blogs, journals and radio.

Watch the presentations from Part One here:

Born in Lugano and now based in Ticino, Fabio Andina is the award-winning author of two novels, a poetry collection and several poems and short stories for anthologies, as well as a new collection of short stories published in September 2020. This year also saw the release of the German translation of his bestselling second novel, La Pozza del Felice, with the French translation set for publication next year.

Simone Lappert is an award-winning contemporary Swiss-German poet and novelist, born in Aurau and now based in Basel and Zurich. The author of two highly-acclaimed novels, she is also President of the International Poetry Festival Basel and co-curator for the poetry project Babelsprech International, and is currently working on a book of poems to be published 2021.

Born in Douala, Cameroon, Max Lobe has lived in Switzerland since 2004 and is the author of four critically acclaimed novels and numerous short stories. His vibrant, award-winning novels are inspired by the traditions of black African literature and postcolonial concerns, tackling issues including terrorism, violence, poverty, homophobia and the plight of undocumented migrants. The English translation of his latest novel (entitled A Long Way From Douala) will be published in early 2021.

Born in East Germany and based in Zürich since the mid-1990s, Sybille Berg is the author of 24 plays, 14 novels and numerous radio plays and essays. Her novels, journalistic writing and plays have been translated into 34 languages, and in 2020 she was awarded the Swiss Grand Prix Literature 2020 for her body of work.

9. Nora Gomringer
GERMAN/ various books of poetry (the majority of Nora’s books have been published by the Berlin publisher Voland & Quist: English translations of her work have published by Burning Eye)

With dual German and Swiss heritage, Nora Gomringer is one of the best-known poets of her generation in either country, acclaimed for her alternatively playful and piercing poetry as well as her lively performances. She is the author of several poetry collections in German and in English and has been awarded several prizes for her work, including the 2015 Ingeborg-Bachman-Prize. She is also Director of the International House of Artists in Bamberg.

Born in Lausanne, Roland Buti is a highly acclaimed Swiss-French novelist and short story writer. The author of some three novels as well as a short story collection, his works have received several awards – these include the Prix Suisse de la littérature for The Year of The Drought, his first novel to be translated into English, which has also been made into a film.

Born in Yugoslavia, Karl Ruehmann is an award-winning German-language author whose books for adults and children have been translated into multiple languages. One of five shortlisted authors for the 2020 Swiss Book Prize, he also works as a literary translator and teaches creative writing at the SAL Story Academy in his home city of Zurich.

12. Vanni Bianconi
ITALIAN/ “The Loveless House” (featured in the anthology Lucifer Over London, published by Humboldt Books in Italy / Influx Press in London)

Born in Locarno, Vanni Bianconi is a London-based poet, writer and translator who has published four prize-winning poetry collections in Italian, as well as a prose essay and short story in English. His poems have been translated into various languages and published in book form, magazines and anthologies. He is also the founder and artistic director of Babel, festival of literature and translation and co-creator of the multilingual web-magazine Specimen. The Babel Review of Translations.

A lifelong resident of Geneva with an international background, Linn Molineaux is a Swiss-French artist, writer and poet. She released her first novel in 2018 and earlier this year had a selection of her poems published in the Anthology of Young Swiss French Poets, as part of the European poetry project launched by Vakxikon Publications. Currently working on her second novel, she also participated in the recent digital European Poetry Festival 2020.

Born in Menziken to a Swiss mother and Trinidadian father, Martin R. Dean is the award-winning author of over a dozen books, novels, essays, memoirs and textbooks. He has written extensively about Swiss identity in a global and post-colonial context, exploring questions such as intercultural issues, racism, identity and forms of love in his work. He currently lives and works in Basel.

Born in La Chaux-de-Fonds, the Swiss-French novelist Julie Guinand is the author of two short novels and a collection of short stories, as well as being a founding member of the AJAR literary collective and co-author of several collaborative works. The winner of multiple young writers’ awards, she has been praised for her fresh approach and eye for detail, with her work described as original, elegant and refreshingly honest.

Born in Thun, Lukas Bärfuss is a prolific German-language playwright, novelist and essayist. The author of numerous plays, several novels and multiple essays and short stories, in 2019 he received the Georg Büchner Prize in recognition of his contribution to German literature. His plays have been performed throughout the world and his novels translated into almost twenty languages, including English for his award-winning debut novel One Hundred Days. His second novel, Koala, which won the 2011 Swiss Book Prize, will be published in English in 2021.