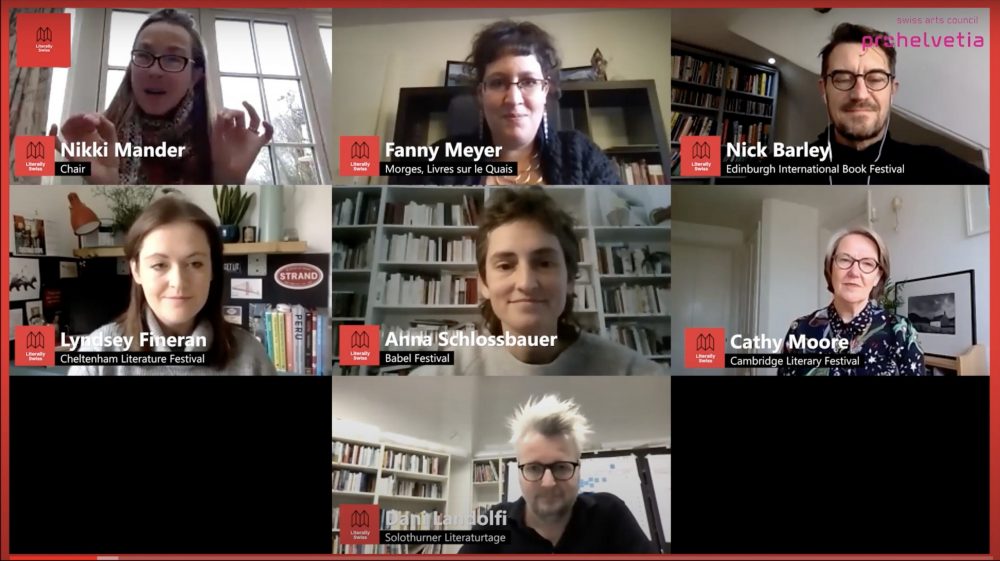 Overview of how the different festivals responded in 2020:

Biggest challenges and positives of 2020 – festival by festival:

Challenges– Despite their desire to maintain the encounter between public and writers as much as possible, certain aspects like book signings were impossible because of social distancing restrictions.

Positives – As they were working with a new team this year, there was a lot of motivation and Gallic ‘courage’. The other plus was that a lot of people came to the event, which was the first physical literary event after ‘months of nothing’ in Switzerland and represented an emotional ‘magical moment’, according to Fanny.

Challenges– Nick said the hardest thing was encouraging organising the team to have confidence – it was scary for them to move from something they had knowledge about to something that was completely unknown, and Nick admitted he was guilty of pushing too quickly at times.

Positives – Speaking from a personal perspective, Nick said it was a good lesson for him in team management and in working more collaboratively. More broadly, the feedback from attendees was very positive too – people commented afterwards on having actively ‘loved’ the event, as opposed to simply ‘tolerating’ it as the team might have expected. They truly managed to create ‘online participatory broadcasting’, where the audience also has a voice – and Nick expressed his belief that all festivals were able to achieve this participatory dimension to some extent.

Challenges – One of the biggest challenges was learning which elements work well online and can stay online going forward, and which elements really benefit from the opportunities that arise from taking place on site (such as the ‘chance encounters between bookworms’ that Lyndsey felt can only happen in real life).

Positives – Since the festival the team has been surprised by the take-up of back access to festival content – the fact that so many people have been willing to pay to watch the events retrospectively.

Challenges – Anna said the team needed to change the programme several times to ensure it ‘made sense’ to the audience; it was also difficult to co-ordinate team efforts, especially with so many team members being based in Italy, which was so badly hit in the early stages of the pandemic.

Positives – With the digital format, it was especially important to find speakers that really connected with and challenged each other, and Anna stressed this ‘focus on finding something special’ is something they hope to carry forward with future digital offerings.

Challenges – The pandemic obliged them to upgrade their website very quickly, which meant they only had a week to familiarise themselves with the new site before going on sale – and this led to some panic!

Positives – Fortunately, Cathy said they were able to recruit a couple of young digital producers to the team, who were ‘heaven sent’ and walked them through the difficult process. Ultimately there not many technical glitches – and they are now working proactively on fixing those they did experience. As mentioned above, another positive was reaching new audiences, as well as developing the ‘CLF Player’ to provide back access to all the recordings from the festival.

Challenges – Dani said they were unable to achieve as much participation as they would have liked, with people mainly consuming the material passively instead of really interacting with it.

Positives – On the whole, he felt the Swiss literary scene proved its flexibility and willingness to ‘do something’ in response to the pandemic – showing it wasn’t as ‘sleepy’ as people might think!

Coming together to look to the future