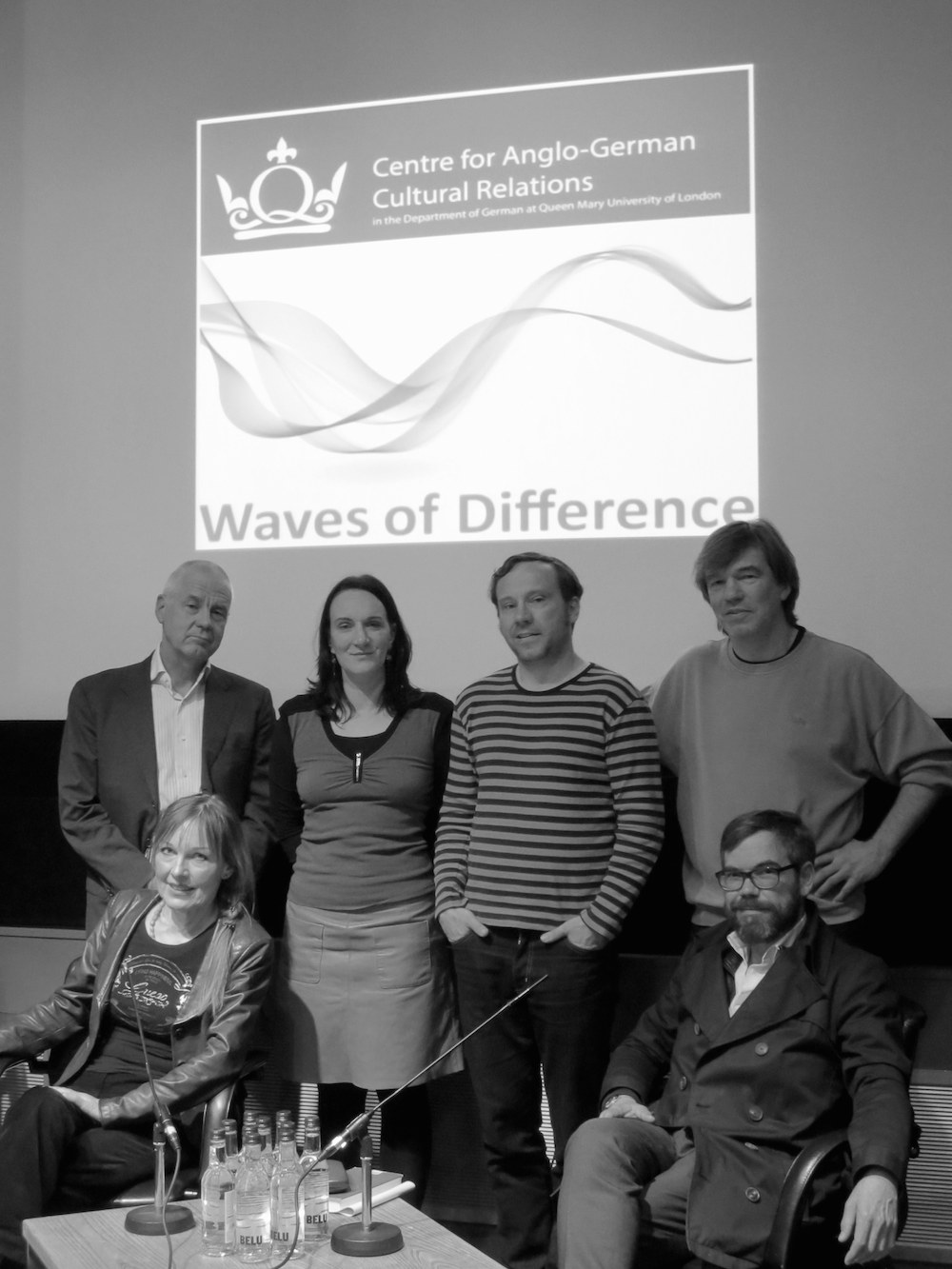 Gala evening and final event of the ‘Waves of Difference’ German Literature Festival to celebrate the 10th anniversary of the ‘Centre for Anglo-German Cultural Relations’ and it’s ‘Writer In Residence’ programme,
Queen Mary University of London.
Place: Goethe-Institut London
Date: 20TH MAY 2015

For more information on all the authors, their works, their awards and the excerpts translated especially for this evening’s event please contact or visit: http://www.qmul.ac.uk/cagcr/

http://www.goethe.de/ins/gb/lon/ver/en14215590v.htm
You can view Photos of the event here:
https://www.flickr.com/photos/[email protected]/sets/72157653188810046
Video interviews with each author and a film of the event will be available soon from the Goethe-Institut London!

Good evening and thank you.
It’s been an honour to work with the GI and the CAGCR over the past decade.
Herzlichen Gluckwunsch!

Our event tonight is called ‘Trendspotting’. We are here to celebrate six ‘trend-setting’ German authors and to discuss the trends they and other writers are setting in German literature today.

The good news from here in the UK is that more contemporary German-language fiction is being recognised and translated. One highly topical example is the shortlist for this year’s prestigious Independent Foreign Fiction Prize – announced next week – which has 2 German writers and their translators on its shortlist of 6: Jenny Erpenbeck and Daniel Kehlmann.
This is against a backdrop of high-profile German political and cultural events in the UK – such as the Germany exhibition at the British Museum, the BBC Radio 4 series on German history – and also our greater interest in international writers.
Long may this continue in these fragile European times.

Other great living German authors, such as Sasa Stanisic, Birgit Vanderbeke, Julia Franck, Clemens Meyer, FC Delius, Berhard Schlink, Jan Costin Wagner, Ferdinand von Schirach, Judith Hermann and Ingo Schulze have also been able to erect their German deckchairs in the English sun in recent years, many of them here in the Goethe-Institut London and also at literature festivals and events across the country.

Our love of W.G. Sebald (‘Saint Max’!), of course, remains undimmed and there’s a new interest in German children’s literature. The UK has also been hit in the past few years by the big German book bombshells like Thilo Sarrazin’s ‘Deutschland schafft sich ab’ (Germany Does Itself in), and, in keeping with our enduring ‘love’ of the 1930s, German history and of the Nazis, Timur Vermes and Hans Fallada have also done extremely well.

And we are still passionate about your German classics. The UK has recently published new editions of Novalis, Georg Büchner, Rainer Maria Rilke, Joseph Roth and Franz Kafka. And after his death, we’re reading Guenther Grass and his contemporaries once more.

We view YOU, though, our German colleagues, as shining examples to US of ‘how it should be done’: your love of reading, books, translated literature, English-language and world writers, your literary experimentation and risk-taking, your support of traditional booksellers and publishing, teaching languages and literature in schools and college, are exemplary. But when we speak of ‘trends’ I’d like to hear from you if that is still the case – with the rise of digital and online in Germany.

After the fall of the Berlin wall – and the profound challenges of unification, political and social change – a whole new genre of post-Wall Literature sprung up, creating a wonderful  diversity of writing with a distinctive multicultural agenda and less rigid notion of German identity. But over 25 years since that great earthquake is that still the case in Germany? Is it time for a reassessment of the trends in German literature?

Now, Zur Sache Schatzchen! We have with us tonight six German authors waiting patiently to take the stage. Six trendsetters, each a prizewinning hotshot in Germany and, over this past decade of its ‘trend-setting existence’, each a Writer in Resident at the Centre for Anglo-German Cultural Relations, German Department, Queen Mary, University of London.

We want to hear as much of them as possible so I’ll give brief introductions to each author – in chronological order of their Residency. I’m not going to list every award they’ve won and everything they’ve written, as you have their biographies printed in front of you.
They’ll chat with me briefly before reading from their chosen work in German – and the translation will be projected on screen.
I hope you have a ‘trendy’ evening! (Yes, I enjoy wordplay!)