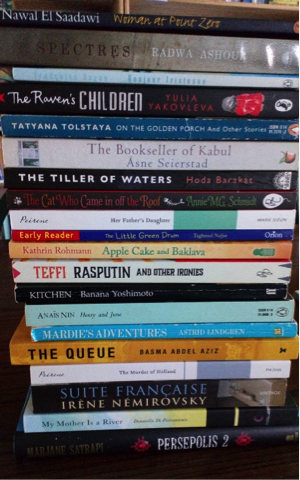 Translated Books in the Twittersphere by Ruth Ahmedzai Kemp

If you’re fan of translated fiction and you’re not on Twitter, then you might want to know what book conversations you’re missing out on.

Last month, August, saw the phenomenal success of Women in Translation month August (#WITmonth). Launched in 2014, Women in Translation Month was the brainchild of translator and book blogger Meytal Radzinski, as a practical response to inherently sexist trends in book commissioning and promotion: it is thought that more women read than men, more women work in publishing than men, and more women study languages and go on to become translators than men, so how is it that foreign-language authors being published in English translation are overwhelmingly male?

Kudos to Meytal for getting the #womenintranslation campaign off the ground with such gusto and building up such momentum through social media. Year on year, it has been quite remarkable to see so many book lovers on Twitter getting behind the idea, posting reviews or pictures of their favourite translated books by female writers. And it wasn’t just in virtual reality, bookshops have been getting involved too, curating tables and window displays of books by female writers in English translation.

Inspired by the widespread enthusiasm for the Women in Translation campaign, a few of us with a passion for children’s books in translation hope to maintain the book-loving energy throughout September and give some much-needed attention to translated kids’ books from all over the world. Two years ago, we launched the copycat hashtag #WorldKidLitMonth and boldly declared September to be the month for celebrating translated children’s books: time to head back to school with kid lit from around the world.

We launched the #worldkidlitchallenge this year with an invitation on our community blog to Tweeters to read and review just one translated children’s title this month. And yet, a surprising number of #kidlit lovers have upped the game and have been tweeting about a #worldkidlit title every day of the month. Looking up this hashtag is a great way to hear about translated titles old and new, and if we retweet them and copy in our local bookshops, libraries or friends in the teaching profession, we gradually raise awareness of the need for bibliodiversity on our kids’ bookshelves.

#Worldkidlitmonth is a newer affair than #WiTmonth but we’ve been delighted to see that it’s already having a positive impact in the real world: libraries and bookshops have started tweeting photos of their displays of translated kids’ books from around the world.

And finally, another project which will be of interest to readers of this blog is the #TA60 series: an historic exploration of 60 years of literature translated into English, to mark the 60th anniversary of the Translators Association, the subgroup of the Society of Authors which represents literary translators in the UK.

These fascinating articles are researched and written by literary translator Charlotte Collins, the co-chair of the Translators Association. Alongside information about the author and the book in question, Charlotte places an emphasis on the role of the translator who rewrote the book so we could enjoy it in English. In fact, Charlotte is being so thorough in her investigations that for many years she has written about more than one classic text per year, and so the resulting history of literature in translation has become an impressive repertoire of anecdotes, events and personalities, covering 26 countries and languages in the 20 years covered so far (1958-1978).

I’m sure like me you’ll be interested to see what international book was first published in English in the year of your birth, so follow Charlotte on Twitter at @cctranslates, search for the hashtag #TA60, or follow the blog (60 Years of Translation) for updates.

With all this discussion and celebration of translated literature on Twitter, it’s worth logging in for a browse. But be warned: you might end up adding a lot of books to your To Be Read pile. And then you just have to be careful you don’t get so hooked on Twitter that you run out of time to actually read them – I’m still working on that.

Ruth Ahmedzai Kemp is a British literary translator working from German, Russian and Arabic into English. She graduated from Oxford University and completed an MA in Translation and Interpreting at Bath University. She most of all loves translating fiction, nonfiction (particularly history, travel and nature) and children’s books.