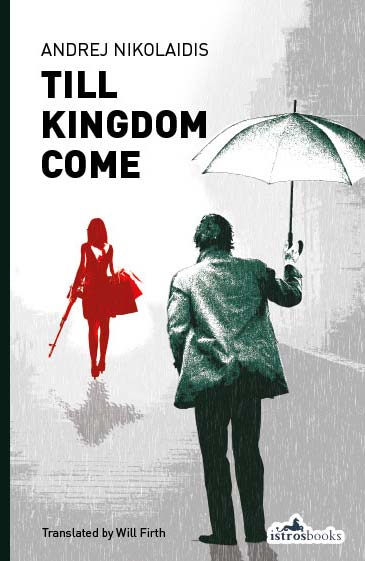 TILL KINGDOM COME by Andrej Nikolaidis

” … a compulsively readable mixture of humour and dark fate, Nikolaidis bitterly explodes all Balkan post-Communist myths. After reading it, you will hate life, but in an immensely happy way!”
Slavoj Žižek

A cynical local reporter discovers that the grandmother who brought him up is actually not his blood relative. Suddenly, the past he has called his own turns out to be a complete fabrication; from the stories of his parents’ lives to the photos in the family albums.

Here starts the most important investigation the reporter has ever undertaken, and one in which the main character is the mother he never knew. He must find what links the woman who gave birth to him to the murderous past of the Yugoslav Secret Services and the liquidation of political opponents abroad and embark on a journey will take him to the site of wartime atrocities, on the trail of fake suicides across Europe, and back to the fate of a local Jewish mystic.

Through his own unique and now recognizable style, Nikolaidis takes us into a world of criminal intrigue and a dissection of our humble human existence. Powerful, rich in philosophy, readers will be gripped by this binding narrative and the existential dilemmas it reveals.

Andrej Nikolaidis is a Bosnian/Montenegrin novelist, journalist and political commentator. He works as a freelance journalist and also writes for the UK newspaper, The Guardian. His novels have been translated into 12 European languages and he is the winner of the EU Prize for Literature. Nikolaidis lives in Ulcinj, where most of his books are set.