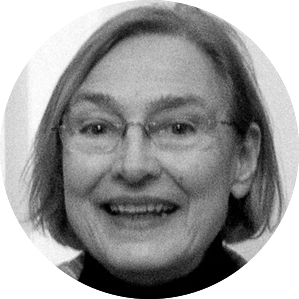 The Swiss Riveter: From LIQUIDA (‘Liquid’) by Anna Felder, translated by Shaun Whiteside

Enjoy the rest of your trip

The insurance broker in the town in German-speaking Switzerland that I moved to decades ago retired when he reached that age. I sometimes meet him walking his dog by the river, wearing overalls and a balaclava or a little beret, and I wonder whether he might be too engrossed in his walk to recognise me.

I always hear the hint of a greeting through his panting breaths, an obligatory beginning perhaps concluded beyond my footsteps, and I bet that regular opening each time we meet does not mean the old Folgendes of the greetings he delivered in his working life. Folgendes – ‘what follows’ – is what he would peremptorily announce on the telephone, Folgendes standing in for surname and hello, Folgendes – ‘what follows, let’s get to the point’ – immediately itemising, point by point, the particulars of the insurance policy.

At home he was known as Folgendes: Mr Folgendes rang, they would tell me when I got home, and the day paused for a moment, it stiffened, shivering, in the examination of conscience that Folgendes demanded, in the paragraphs, the risk assessments and the disasters which befall everyone sooner or later, me yesterday by the river, you today in the street.

If Mr Folgendes knew that in the other town by the lake where I was born, in that town in Italian-speaking Switzerland, to which I return at varying intervals to realise that I am at home as soon as I step into the street, in that greeting caught in mid-air, if my dog-walking Folgendes knew that Swiss Italian a double of his, an accomplice or a colleague is also getting to the point down there, repeating and multiplying it in the byways of the town centre, walking, walking in our footsteps on behalf of everyone: this other one without a dog, in an overcoat and scarf or in a dark suit, he too a tireless master of the lake, of the lakeside walk and of Paradiso; never in a hurry, but not idling either, with a flat briefcase under his arm or a newspaper or even a baguette. Tall, chest and belly carried prominently, the head always held high to keep the glasses in place, it looks as if he can only see a great distance away, very far off on the horizon, misfortunes and catastrophes as far as the eye can see, folgendes, folgendes beyond the traffic lights, beyond Campione and the border.

And in fact as soon as I pass him, having freshly arrived from the other side of the Gotthard, he is already anticipating my greeting, he is already dismissing me in a few words, looking at my absence, not at all surprised by my presence. ‘Enjoy the rest of your trip’, he says all of a sudden without stopping, without a hello or any kind of preamble, ‘enjoy the rest of your trip’, as he used to stay to my father and mother when they were still alive.

‘Enjoy the rest of your trip’, he says again when he bumps into me two hours later or even two years later, thus discounting the possibility, forever each time, that my next return or my next departure will ever occur.

Anna Felder was born in Lugano. She studied at the Faculty of Arts at Zurich University, where she specialised in Romance languages. After spending time in Paris, she gained her doctorate in Zurich. She taught French and Italian and is now a full-time writer. She is best known for her novel La disdetta (‘The Cancellation’, 1974).

Shaun Whiteside’s latest translations from French, German and Italian. include Black Water Lilies and Time is a Killer by Michel Bussi, The Temptation to be Happy by Lorenzo Marone, Malacqua by Nicola Pugliese, Blitzed by Norman Ohler and To Die in Spring by Ralf Rothmann. He has previously translated works by Nietzsche, Freud, Schnitzler and Musil for Penguin Classics.﻿