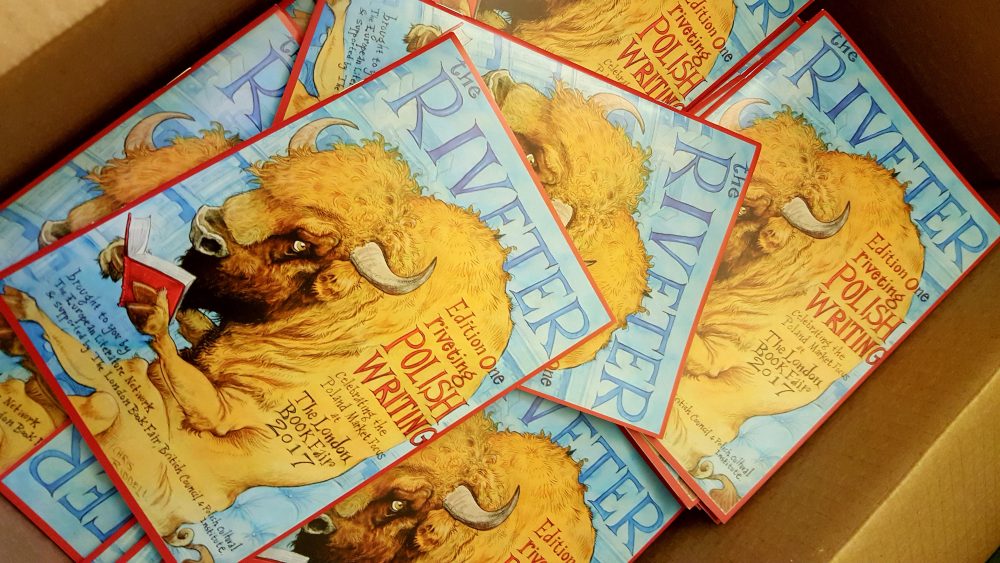 Introduction to The Riveter, Edition One, the London Book Fair Polish Market Focus

Can bison read books? Well they can if they are Polish bison! And especially when they’ve been brought to life by star illustrator and Children’s Laureate Chris Riddell. These huge, rare and magnificent beasts – the Żubr or Bison bonasus gracing our cover – roam the ancient Białowieża Forest and are one of Poland’s proudest national symbols.

Poland’s literature is also hugely impressive and too rarely read in English. So we have dedicated our first edition of The Riveter to Polish writing and writing about Poland in English, roaming far and wide to forage for some of the most interesting reads and reviews, authors and translators, innovations and events, to make our contribution to London Book Fair 2017’s Polish Market Focus. With prize-winning author Deborah Levy agreeing to guest-edit, writer and editor West Camel editing, broadcaster and director of the European Literature Network Rosie Goldsmith as Riveter-in-Chief and with support from London Book Fair, the Polish Cultural Institute and the British Council, we are confident our Polish bison can now run wild and free.

Polish literature is in rude health. In a bid to reflect this vitality in our magazine, we’ve decided to feature the best new and recent Polish literature; to tantalise you with reviews of upcoming Polish writing; and to proselytise about the future by offering you a taster menu of work in Polish yet to be published in English.

For our first Riveter, we have a star line-up of Polish and European literature experts writing for us: polyglot and translator Julia Sherwood reviews one of this spring’s stand-out translations, Wioletta Greg’s Swallowing Mecury; Daniel Hahn, writer, translator and current Chair of the Society of Authors, reviews Clementine Loves Red, Krystyna Boglar’s delightful children’s book; and poet Sasha Dugdale reviews Jacek Dehnel’s latest poetry collection. We have literary appetizers from writers Julia Fiedorczuk and Artur Domosławski, reviews of crime-writing from Aga Lesiewicz and of the short stories of Agnieszka Dale (both Aga and Agnieszka are Polish writers working in English), as well as some non-fiction and a sprinkling of #RivetingReads – tweet-length book recommendations from our network of European literature fans.

Our special advisor on our selection of titles is the oracle of all things literary and Polish, the translator Antonia Lloyd-Jones. In addition, Harriet Williams of the British Council provides a line-up of the Polish writers appearing at London Book Fair, and Magda Raczyńska from the Polish Cultural Institute gives us the low-down on the what, when, who, where and how of Polish writing in the UK. And this magazine would not be possible without our very own Anna Blasiak – translator, Polish literature expert, and perfect Pole – who has created the volume you hold in your hands.

Our team has come together with one goal: to bring to light the best of Polish literature in English, and to reflect on how reading across borders nourishes us all. To demonstrate this we are giving pride of place in our magazine to the short story Black Vodka, from the eponymous collection by our guest editor Deborah Levy.

But that’s not all. We are extending our celebration of the LBF Poland Market Focus beyond this print magazine. This month, on our website, eurolitnetwork.com, we’ll be publishing even more reviews, views, previews and recommendations of Polish literature. And finally, at the end of March, an expanded version of The Riveter magazine will be available as a download on the site – a free gift, from the Żubr to you.

The European Literature Network was created to help promote, and raise the profile of, European writing in English. The website was created to support the Network. Our monthly #RivetingReviews were then launched online in 2015 to broaden the quality and quantity of reviews. Not only were the review pages in traditional media shrinking but they were, we felt, becoming too formulaic and impersonal, and the cast of critics – especially of foreign books – was too narrow. But our dream was always also to create a print magazine.

‘Riveting’ is both our ambition and Rosie’s nickname: ‘Rosie the Riveter’ was an American cultural icon in World War II. She was a factory riveter, an early feminist, representing female workers across the USA, and then adopted as a figure of Women’s Power across the world. She was also fictional – so, it’s a great story.

The Polish Riveter is our first print magazine, our baby bison taking a few modest steps but with the ambition to grow big and strong and roam free across the whole of European literature. Pick it up – for free – be caught by its gimlet eye and be riveted by the best of Polish  literature.

By Rosie Goldmith and West Camel