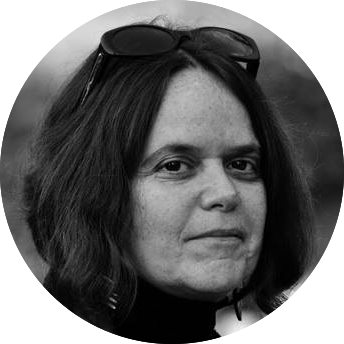 The Queer Riveter: From NIGHT SCHOOL: A READER FOR GROWNUPS by Zsófia Bán, translated by Jim Tucker

The Two Fridas (school beyond the border)

They had us sitting together, though that wasn’t what we wanted. We even said we didn’t. At that, our teacher whisked her cane staff through the air with an astonishing alacrity, given her body weight. Who asked you, she asked, and since no one had asked, we decided not to answer rather than be asked again. We sat in silence. Held our traps. The whole class held its traps. You might say it’s not particularly good being a new kid. Everyone is constantly sizing you up, particularly if there are two of you, and even more particularly if the two of you are one. We tried to ease the situation by dressing differently: Frida would wear a richly-laced long white dress with three-quarter sleeves, its lower hem adorned with a cute little red flower pattern, while I had on a blue and yellow top matched with a long, olive-green skirt with white flounces at the hem (sadly, jewellery was not allowed, which always made us feel like we were going out naked). Even so, we were constantly being mistaken for one another. They said it was confusing that we both had the same name, though we thought this should actually make things easier. Not for them, though. Well my little dolls, we were told with unrestrained superiority, the custom around here is to call two identical copies by different names. So they wouldn’t be so identical. There is a certain logic to that, we said when we still thought there was some sense in debating them, but you must admit that another view is equally acceptable: if two identicals are identical, then their names should be identical, too. The multiplicity of such systems of logic is known as ‘cultural difference’. This got a big belly laugh out of the whole class.

The only one who didn’t laugh was the Gypsy boy, Sanyi Lakatos. He could empathize; he knew from cultural differences. I’ll smash their faces in if you want, he said. We didn’t, but thanked him kindly anyway. Gracias. We liked Sanyi Lakatos. He could flip a compass over his knuckles like nobody else. He also reminded us of the boys back home. Especially Diego. Diego was half-Indian, while Sanyi Lakatos was completely Indian. One of us always carried a medallion portrait of Diego until it was confiscated by the lady who taught chemistry. She said it was distracting us from the compounds. If she only knew how wrong she was! The best chemistry in the world was the kind we had with Diego, but those washboard-chested toothpicks couldn’t even imagine what that was. We were much more developed than they were: for one thing, we already had moustaches, something they found—how should we put it?—off-putting. (Alright, they gave us hell for it.) They said that sort of thing wasn’t done around here. Said we couldn’t be assembling for patrol like that. Said a Pioneer couldn’t go around looking like that. Thank God, we said, one less thing to worry about. Needless to say, we shouldn’t have said that. There’s no God around here, screamed the homeroom teacher, and her face, glistening with oils, went all red. No she said, just listen to Comrade Lenik and our pal Comrade Principal. (We wondered about this Comrade Lenik, but dared not ask any questions, thinking this would only make matters worse.) Pack yourselves right off to the principal’s office, and take your report cards with you. Our pal Comrade Principal (if he was our pal then we were the mayor of Teotihuacan) received us with excessive smarm, which only made him more frightening. He inquired, and I quote, what had brought us there, and had we perhaps gone a step over the line, and now now girls, let’s have a confession before I get all in a huff. Since we didn’t know why we were there, we said nothing. Girls, he said, better not squinch your eyebrows like that when talking to me, or things will really get ugly. Unfortunately, we were in no position to satisfy this request spliced into a threat, given that we were stuck that way. It was no use Grandma Kaló’s telling us a thousand times, Oh Fridas Fridas, don’t squinch your eyebrows because you’ll get stuck that way. We just wouldn’t listen. We squinched and squinched until, one day, we just got stuck that way. Hence we were in no position to satisfy the request of our comrade the principal, and told him as much. To this, he responded that we would deeply regret this, and sternly asked for our report books. Our comrade the principal got to writing and writing. We envied him this facility; as for us, we could spend all day pondering the right words. There we stood, in the middle of the principal’s office, and suddenly became aware that the lazy spot of afternoon sun had faded from the national emblem on the wall, framed by sheaves of wheat. In other words, dusk had fallen. Alright then, said our comrade principal at last, there we are. Now, you two just take this home for your father to sign. And I’d better not see you here any more because, well, now now, he said unctuously, which sent a shiver down both our spines.

From NIGHT SCHOOL: A READER FOR GROWNUPS

Translated from the Hungarian by Jim Tucker

Zsófia Bán grew up in Brazil and Hungary, and is the author of three works of fiction and four essay collections. Winner of numerous prizes for her writing, she is also a former writer-in-residence at the DAAD (German Academic Exchange Service) programme, and is currently a professor of American Studies at Eötvös Loránd University in Budapest.

Jim Tucker, a classical philologist living in Budapest, translated works from German, French, and Italian before making the acquaintance of George Konrád, for whom he has since translated some thirty-five essays from the Hungarian, in addition to works by numerous other authors.