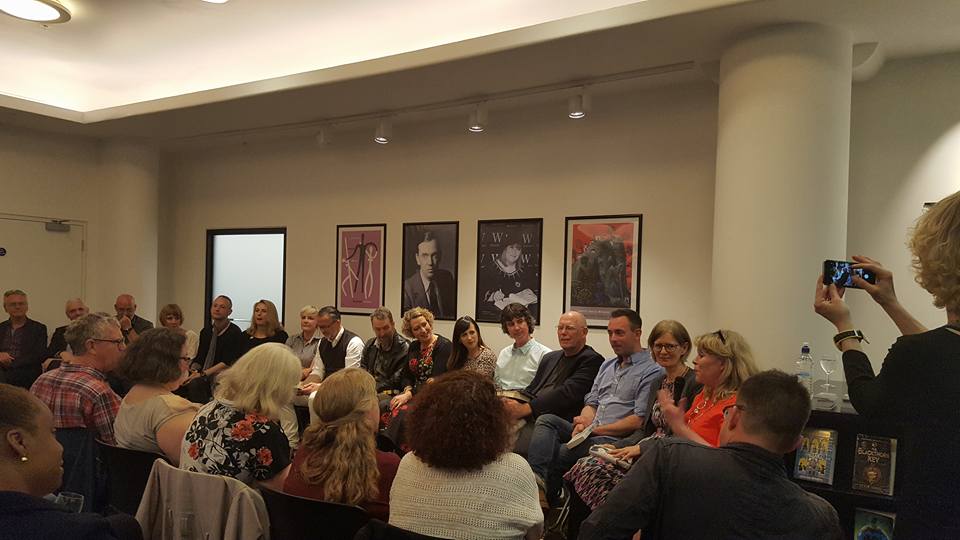 The 17th of May is Norway’s national day. So at Orenda Books’ first roadshow event of 2017, at Waterstone’s Piccadilly, the akvavit was flowing; with three eminent Norwegian crime writers present, it seemed appropriate to celebrate.

In fact, Orenda Books publisher, Karen Sullivan, had assembled fifteen of her authors for the event. There was a strong Nordic contingent, Orenda having made a name for itself in the three years since its founding as a champion of Nordic writing. Finns Kati Hiekkapelto and Antti Tuomainen sat beside the Icelander Ragnar Jonnason and the Norwegians Thomas Enger, Kjell Ola Dahl and Gunnar Staalesen. (Akvavit is, in fact, the favourite tipple of the hero of Gunnar’s books, Varg Veum.)

The international component extended to some country blends: Johana Gustawsson writes in French, lives in London, and her debut, Block 46 is set in Germany, the UK and Sweden. Paul E Hardisty is originally French-Canadian, but now lives in Australia, where he writes in English, drawing on his experiences in the Middle East and Africa. Finally, representing English writing from South Africa but about Botswana, was Stanley Trollip, one half of the writing duo Michael Stanley, responsible for the ‘sunshine noir’ Detective Kubu novels.

As a freelance editor, the majority of my work over the past few years has been for Karen Sullivan and Orenda Books. So sitting in my usual back-row seat (all the better to observe from), it was with delight, and not a little amazement, that I viewed this line-up authors whose fiction I’ve edited. Even more interesting was to hear the non-native English speakers read extracts from work they’d created in a language other than the one in which they wrote it. Inevitably, some English pronunciation wasn’t quite correct, but it was a joy to hear, for example, the fluty Helsinki street names trip off Antti Tuomainen’s tongue.

One of the issues often arising at the European Literature Network meetings I attend is that translators need to be mentioned – in reviews and at events. And Karen Sullivan did just that: so when Kjell Ola Dahl and Gunnar Staalesen read from their most recently published books, the audience knew it was the words of the eminent Don Bartlett that fell from their lips. With Thomas Enger the words were from Don’s fellow Norwegian translator, Kari Dickson. The Finns also share a translator in David Hackston; and Ragnar Jonasson’s translator, Quentin Bates, is translating a new Icelandic voice for Orenda: Lilja Sigurdardottir (watch out this autumn for her novel Snare). Finally among the name-checked translators was Maxim Jakubowski, who worked on Johana Gustawsson’s debut.

The discussion among the fifteen-strong panel, managed with a firm hand by Karen S, focussed at first on what it meant to be considered a crime writer. Su Bristow’s Sealskin is the retelling of the Scottish myth about selkies – seals that assume human form. ‘There is a crime in this novel,’ Su said, but she didn’t set out to write in the crime genre. Neither did Louise Beech, whose debut How To Be Brave hardly falls into that category; but, look, Karen pointed out, she followed it up with a psychological thriller in The Mountain in My Shoe. Sarah Stovell’s latest, Exquisite, bears the same label, but she moved to it from historical fiction; and Michael J. Malone was a poet before he decided to write thrillers, and then moved onto his first book for Orenda, A Suitable Lie, which falls under what must be one of the industry’s newest categories: ‘domestic noir’.

Gunnar Staalesen and Kjell Ola Dahl, on the other hand, who share the title ‘Godfather of Nordic Noir’, both have long histories of writing in the crime genre. Kjell’s Oslo Detectives series are police procedurals; Gunnar’s Varg Veum books take the private-investigator-led noir of Raymond Chandler from the west coast of the US to the west coast of Norway, from the rampant capitalism of LA to the social democracy of Bergen.

Crime fiction, inevitably, comes with some violent and uncomfortable scenes. So an interesting question from the audience concerned how the authors process the experience of writing a particularly difficult passage. Paul Hardisty, whose most recent book, Reconciliation for the Dead, examines some of the darkest acts of South Africa’s apartheid regime, said he goes to the dojo and gets beaten up. Matt Wesolowksi, though, whose novel Six Stories blends podcast-style transcripts with some horror elements, simply plays with his cat. For Johana Gustawsonn, however, things are a little different. Her novel deals partially with events around the Buchenwald concentration camp – a place where her grandfather was imprisoned. The violent scenes in Block 46 are a way for her to work through and represent her family’s history.

Orenda’s Evening of International Crime was a great showcase for this young publishing house. Afterwards, sipping my shot of akvavit and munching on one of Karen Sullivan’s now famous event-cakes, I reflected on how far this small press has come in so short a time, and also on the range and depth of writing the contemporary crime genre encompasses. Being personally involved in Orenda’s work, I felt entirely justified in patting Karen, and myself, on the back: ‘Good job,’ I mumbled through a mouthful of butter icing …